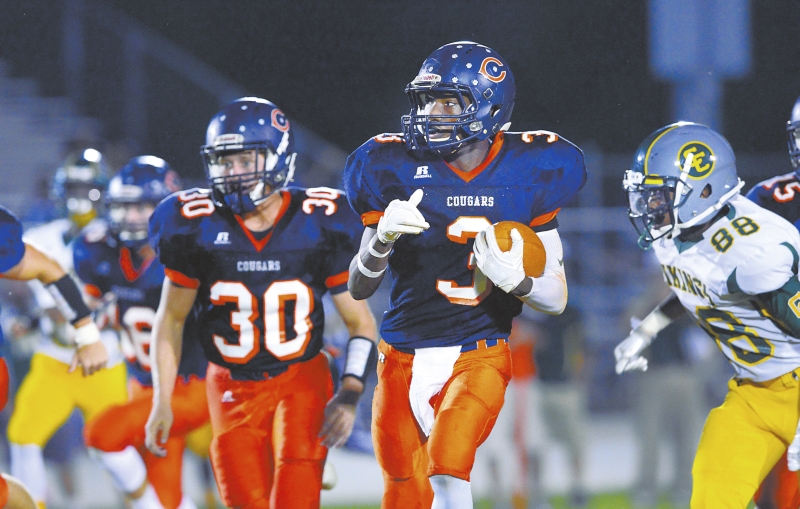 CHINA GROVE — Catawba College head football coach Curtis Walker generally discusses recruits with careful, low-key phrases such as “we believe he can help us” and “he’ll have an opportunity to contribute.”

When Carson cornerback Brenden Westbrook signed with the Indians, however, Walker almost needed a seat belt.

“We  believe he will be a fine player,” Walker said. “He has the chance to become an All-American here.”

Walker even used the verb “dominate” in the same sentence as Westbrook. That’s not a word Walker tosses around casually. He loves this guy.

“He’s a quality athlete, someone who can fit in with Catawba right away,” Pinyan said. “So long and so athletic. You can’t teach length.”

Westbrook is one of Rowan County’s finest three-sport athletes. He’s arguably the best senior athlete in the county.

At 6-foot-3, he was a first team all-county cornerback. He was named South Piedmont Conference Co-player of the Year for special teams for his return skills.

A key man for three seasons on Carson’s basketball team, Westbrook has scored almost 700 points, and he can be counted on for 11 points and 8 rebounds per game. Catawba coaches probably saw him play more basketball games than football games, but the basketball court is a good way to evaluate football players — not just for athleticism, but for competitiveness, demeanor, interaction with teammates and coachability.

Westbrook was second team all-county last season on the hardwood, but he confesses he doesn’t like basketball that much. His school needs him to play and his friends and coaches count on him, so he competes and plays his heart out — above the rim. At times, he makes dazzling dunks.

In track and field, Westbrook’s impressive springiness has made him the  reigning county champion in the long jump and triple jump. He was runner-up in the high jump at last spring’s outdoor county championships. Athletes are eligible to compete in four events, so Carson also put him in the 200 meters. His stride is long, and he managed to finish fourth behind three talented sprinters.

Recruiting can be a mystery. Westbrook is an outstanding student whose character is held in high regard by everyone, but colleges didn’t knock down his door. Richmond, East Carolina and Appalachian State were among the schools that expressed interest — maybe they had Westbrook on their list if other prospects didn’t commit — but none of them offered.

“I was on the verge of thinking I wasn’t going to get any offers at all, “Westbrook said. “My dad (Shaun) told me to hang in there. Then Catawba had a camp in January where I had a chance to show some of my abilities. Coach Walker came up to me and made me an offer face-to-face.”

Westbrook’s signing was announced the day after National Signing Day because some paperwork hadn’t cleared yet, but he’s expected to be one of the key members of this Catawba recruiting class.

Catawba had two senior defensive backs last season, safety Chris Carpenter and all-everything cornerback Case Woodard. That doesn’t mean Westbrook will immediately move into the lineup, but it does mean he’ll have a chance to compete for playing time early in his career.

Westbrook looks almost skinny at 170-175 pounds, more like a shooting guard than a DB, but he’s got a wiry strength about him, and his frame will easily handle more weight and muscle as he matures and his sessions in the weight room intensify.

“He’s one of those three-sport kids, so once he starts focusing on one sport and  training specifically for that sport, he’s going to make some real strides,” Pinyan said.

Catawba is starting a track team. There’s no doubt Westbrook could help that program get off the ground, but his thoughts are focused on football.

“Football is what I’m passionate about because I just love the physical part of the game,” Westbrook said. “It builds character. It makes you a stronger person.”

There’s a chance Westbrook could see some duty for the Indians as a receiver in specialized situations. If Catawba is on the 10-yard line, Westbrook would be a nice option on a fade route. He has good hands and he can go airborne like few people can.

As a senior, Westbrook accounted for five Carson touchdowns, two on interception returns,  two with catches on offense and one on a kickoff return. His game against Central Cabarrus will be remembered as long as the Cougars play football.

No one person ever wins a football game, but Westbrook came pretty close on that September night. With Carson trailing 14-10, he ran back the second-half kickoff 76 yards for a go-ahead touchdown, cutting off blocks like a running back until he found open space,

Not long after that, he was racing 70 yards with an interception for another touchdown.

Carson went on to win, 31-14. No one in Carson history had ever produced a pick-six and a kickoff return for touchdowns in the same game.

“He didn’t just do it it in the same game, those two scores came a few minutes apart,” Pinyan said. “He went a long way on both of them, with a lot of athletes chasing him.”

Salisbury High is thrilled Westbrook is graduating. He had pick-sixes in each of the last two seasons against the Hornets.

A huge crowd gathered Wednesday morning when Carson held a signing party to honor Westbrook. A cross-section of students were there, athletes and non-athletes, even students from rival schools. He’d be popular even if he didn’t play sports.

“I’ve been playing football since third grade, but  I was one of those kids who was quiet until I took a theatre class at Carson,” Westbrook said. “That class opened me up a lot more. It kind of prepared me for who I am now.”

Who  he is now is a potentially outstanding student and leader for Catawba as well as a football player. He plans a career in law enforcement or business. He’ll probably seek a degree in Administration of Justice at Catawba.

The only thing Westbrook isn’t good at is adding pounds.

“I eat all the time, sometimes I eat two dinners, but I still don’t gain weight,” Westbrook said. “I’ll be hitting the weight room right after basketball.”