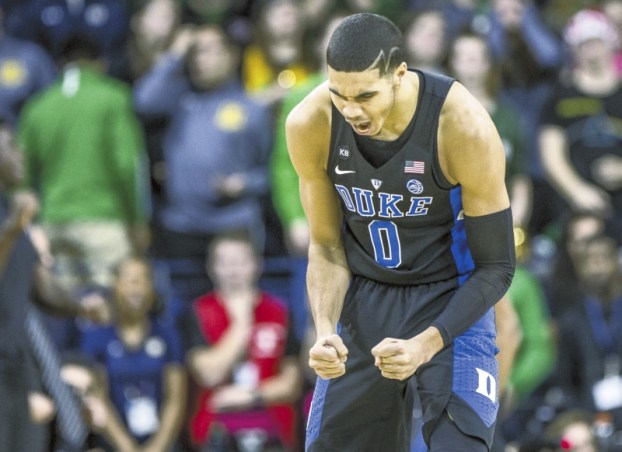 AP Photo/Robert Franklin Duke’s Jayson Tatum (0) celebrates after a big basket during the second half of a game against Notre Dame on Jan. 30, in South Bend, Ind. Duke won that game and hosts UNC tonight. DURHAM (AP) — The drama looming around No. 18 Duke seems to have finally stopped. Maybe the struggles have, too.

For the team picked No. 1 in the preseason, the past three months included plenty of bumps — their Hall of Fame coach was sidelined, key players missed games, access to their locker room was denied, and they lost more games than expected.

But with No. 8 North Carolina in town Thursday night for the renewal of one of college basketball’s fiercest rivalries, the Blue Devils (18-5, 6-4 Atlantic Coast Conference) hope they’ve got everyone and everything back — including their confidence.

“They are coming together, and we’ll see if they come together at a high enough level to compete at the level we would like to compete at,” coach Mike Krzyzewski said Wednesday.

That’s been a challenge for a team that entered the season as the favorite to win it all, largely on the strength of one of the nation’s best recruiting classes, a strong core of returning players and a Hall of Fame coach in charge.

The big problem: For most of the season, they haven’t been available at the same time.

They are now: Krzyzewski — who is preparing for just his second game since returning from a monthlong break for back surgery — says this is the healthiest the Blue Devils have been all season.

“We’re not the only team in the country that has setbacks like this,” Krzyzewski said. “We just have had more.”

Krzyzewski left the team in early January to have back surgery, and returned for last week’s victory over Pittsburgh. Guard Grayson Allen was suspended indefinitely — which turned out to be for one game — and was stripped of his team captaincy after tripping an opponent for the third time in a calendar year.

Freshmen Harry Giles, Marques Bolden and Jayson Tatum missed the start of the season due to injuries, and forward Amile Jefferson — arguably the most important player on the roster — was out for two weeks after bruising a bone in the same foot he broke last year.

Things bottomed out when, after a home loss to North Carolina State, Krzyzewski summoned the team to his house for a meeting, kicked them out of their locker room and banned them from wearing Duke gear in public. Krzyzewski said the team regained those privileges before the next game at Wake Forest, a victory that the Blue Devils’ current three-game winning streak.

“No excuses,” guard Luke Kennard said of the days after the N.C. State loss. “We knew we needed a change.”

Krzyewski has long loathed comparisons between current and past Duke teams, though there are parallels between these Blue Devils and the 2015 group that won a national championship with three one-and-done freshmen.

The assumption was that Tatum, Giles, Bolden and Frank Jackson would fit neatly into the same roles that Jahlil Okafor, Tyus Jones and Justise Winslow did during the last title run.

There was a clear order to that team — Okafor and Winslow were the obvious focal points, Jones and Quinn Cook were key facilitators and the rest of the players had well-defined supporting roles.

It’s a bit tougher to decide who the current go-to guy is.

“We’re a group of talented guys, and we’re good,” Allen said, “but we’ve just got to come together and be a good team.”

Maybe it should be Allen, a preseason All-American who has scored at least 19 points in three straight games. Or Tatum, who averages nearly 16 points and could be next in Duke’s recent run of one-and-dones.

It could be that Kennard is the best solution. The team’s top scorer at 19.8 points per game, he’s reached the 20-point mark 11 times this season and had a 30-point half against Wake Forest, capped by the go-ahead 3-pointer with 6.6 seconds remaining.

One thing is certain: With a little over a month until Selection Sunday, Krzyzewski doesn’t want this team to be burdened by those high expectations or comparisons.

“Let’s live your moment, and your moment’s going to be different than Tyus, than Brandon (Ingram), than Kyrie (Irving),” Krzyzewski said. “Live your moment, and we’re going to try to make your moment as good as possible. … If they’re proud of what they’ve just done, if they’ve given their effort and they’ve cooperated, and they have, then let’s see where it all ends.”