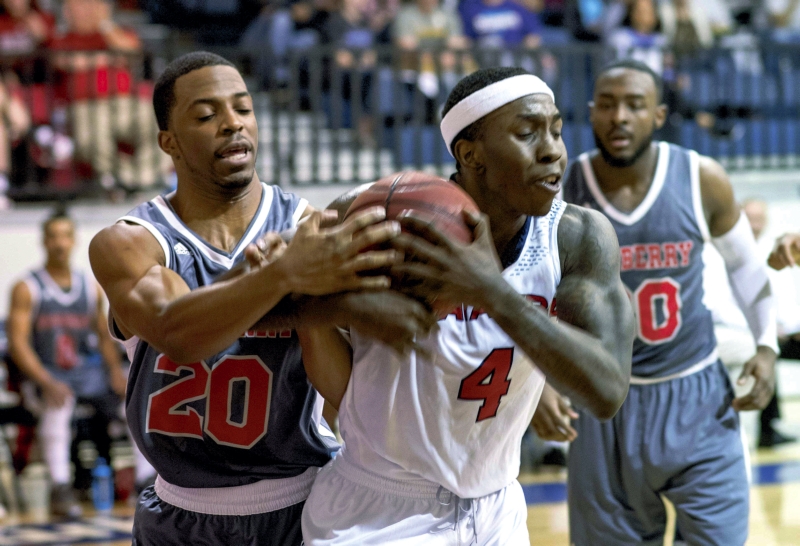 It was that sort of Wednesday night for Catawba, which fell to the visiting Wolves, 92-87, at Goodman Gym and had a six-game winning streak snapped.

Despite flurries of turnovers and lousy 3-point shooting, the game was still quite winnable for Catawba late. Jerrin Morrison scored on a swooping drive to get the Indians within three points. Then with 1:07 remaining, Newberry’s red-hot Mason Spease finally missed on a 3-point attempt. But that’s when Evans chased down that critical long rebound. Thirteen seconds later, Marshall Lange was powering in a bucket for the Wolves —  as Malik Constantine fouled him — and Catawba (16-7. 9-7) was headed for a bitter defeat.

From a physical standpoint, there’s no way Newberry (14-9, 9-8) should’ve beaten the Indians, who were taller and stronger and at least as quick. But the tiny Wolves — their biggest guy on the floor was usually 6-foot-3 — won the two areas they had to win, outscoring Catawba 36-9 from the 3-point line and winning the turnover battle, 20-11.

“Unbelievable, just a gutsy effort by our guys,” Newberry coach Dave Davis said. “We kept believing even when it didn’t look very good.”

Both teams were pretty awful the first five minutes. Then the action picked up, as Morrison (22 points, 15 rebounds) started banking in jumpers. Catawba led by as many as 11 in the first half but settled for a 43-38 halftime lead.

“Our intensity was good in the first half but we couldn’t make anything happen on the offensive end,” Davis said. “Our hearts were in the right place, but our minds weren’t.”

Newberry had no hope of dealing with Catawba’s 6-9 Troy Warren inside, but he had only two shot attempts in the first half and five for the game.

“We kind of fell into that trap that Newberry sets,” Perron said. “They speeded us up, and we took quick jumpers instead of being patient and looking inside. They get you fatigued  a little bit, and then the jumpers stop falling.”

Still, Catawba appeared to be in control as it traded buckets with the Wolves in the early stages of the second half. K.J. Arrington was cold, but Jameel Taylor (18 points) was heating up for the Indians.

“Catawba’s guards are great drivers,” said Newberry guard D.J. Copeland, a former A.L. Brown High standout who was the 2013 South Piedmont Conference Player of the Year. “We had to play them for the drive and give up some 3-point attempts. Fortunately, they weren’t making many 3s.”

Taylor drove baseline for an electrifying jam with 15:28 left, and the Indians led, 59-50. Warren hammered an uncontested dunk just 24 seconds later, and the crowd, sensing another victory, roared.

But then the game turned around. The two guys who turned it grew up within 35 miles of Goodman Gym — Copeland and Central Cabarrus High grad Spease.

“The goal coming in was to make 25 3-pointers,” Copeland said. “We didn’t reach that goal, but we did play our style of uptempo game in the second half. It felt good to play like that. We’ve been struggling some, and I’ve been in a slump.”

Copeland’s 3-pointer with 12:04 remaining gave the Wolves their first lead of the night at 65-63.

“We didn’t do a good job playing the scouting report,” Perron said. “We needed to make those guys feel heat early, put them in drive mode, rather than shooting 3s in rhythm. We did contest those shots, but they were late contests. We wanted them to have to  make 2s if they were going to beat us, and instead we let them shoot confident 3s.”

Another 3-pointer by Spease at the 10:31 mark put the Indians down five. James Sattisfield got loose for a layup with 9:48 remaining, and the Wolves led by seven.

Quaman Burton’s jumper with 4:17 remaining — Spease got the ball to him — put the Wolves ahead to stay.

Morrison got in the lane with 3:49 left, missed, got the ball back, and had a shot blocked out of bounds by Burton. After a timeout, Catawba located Warren inside, but his pointblank shot, as he was fouled, wouldn’t fall. He missed both free throws. That was a turning point.

Then Spease drilled his fourth 3-pointer — Evans found him — and the Wolves led 84-80. Catawba would unsuccessfully chase them the rest of the way.

“We had so many turnovers,” Perron said. “Some of them were Heebie-jeebies turnovers. We weren’t under that much pressure, but it’s like we were hearing footsteps.”

Perron pointed out that while Catawba smashed the Wolves on the glass, 52-32, the Indians actually were outscored on second-chance points. That’s hard to do, but Newberry capitalized on its rare second chances, while Catawba had trips where it missed three or four shorts.

“The only time we got a rebound was when Catawba batted it around for a while, and then it fell in our hands.” Davis quipped.

Catawba could wince about 3-for-17 3-point shooting and Arrington’s 1-for-8 night hurt, but the biggest factor in the loss was that Newberry played a superb second half, shooting 60 percent from the floor and 50 percent (8-for-16) on 3-pointers. Newberry made just two turnovers in a second half played at a fever pitch.

“We took care of the ball a lot better in the second half,” Davis said. “And we shot a little better.”

Davis is Perron’s mentor. They worked together at Pfeiffer and Newberry before Perron was hired at Catawba, and it’s safe to say they cheer for each other — except when they oppose each other. Then it’s like two brothers fighting in the backyard.  Catawba won 100-99 in OT at Newberry.

Catawba will look to bounce back on Saturday when Anderson visits Goodman Gym.