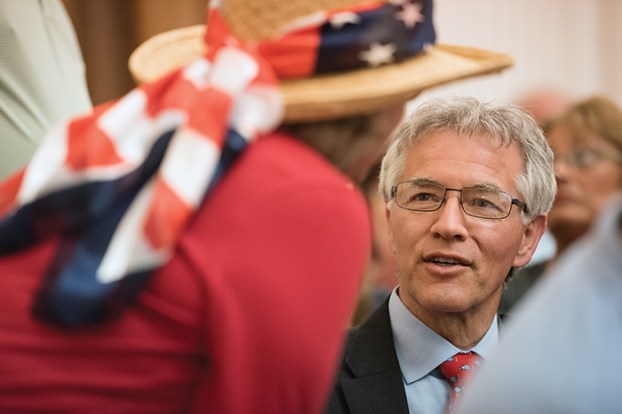 By Josh Bergeron and Rebecca Rider

SALISBURY —  State Rep. Harry Warren on Tuesday introduced a bill that could make Rowan-Salisbury school board elections partisan as early as 2018.

Warren’s bill — House Bill 42 — would ask voters to choose in a referendum whether school board candidates would be identified by party. Though the shift could happen as early as 2018, it’s more likely that the first partisan school board elections would be in 2020.

Warren, R-77, said he introduced the bill because there’s been years of local discussion about whether to add party affiliation to school board elections. Board members discussed the idea in December but did not come to an agreement.

Rowan-Salisbury Board of Education Chairman Josh Wagner said he has had several “sidebar discussions” about the idea since the December meeting and that he suspected a bill was in the works. But he said he was “surprised” it was put on the table so quickly.

“I don’t think that decision should be dictated or determined by the board or a single representative because it affects the entire county,” Warren said Tuesday. “I think it’s a decision that’s best left to the voters at large.”

Partisan elections could start in 2018 only if a new countywide election is scheduled this year.

The terms of Allen, Hunter, Kennedy and Miller expire in 2018. Cox, Wagner and Byrd will see their terms expire in 2020.

Although the school races are currently nonpartisan, local political parties regularly put the names of favored candidates on handbills that are passed out at the polls. That practice can become divisive when multiple candidates registered to the same party run for the same seat.

In 2016, for example, Wagner and Republican Mike Julian both ran for the 3rd District seat. Wagner received the Rowan County Republican Party’s endorsement and went on to win the race.

Wagner said he sees such endorsements as justification for having partisan elections. He said every member of the board has benefitted from a party endorsement.

“I just think it’s just a little unfair to remove partisanship from the table and pretend it doesn’t exist,” he said.

Should county residents vote to keep nonpartisan races, Wagner said he thinks the board should have “some real discussion” about members taking advantage of partisan affiliations.

Calls to Miller, the only unaffiliated member of the board who was the strongest opponent to partisan races in December, were not returned.

So far, Warren’s bill has only been assigned to the House Committee on Elections and Ethics Law. It still has a long road ahead in the N.C. General Assembly before voters have a chance to vote on the partisan change.