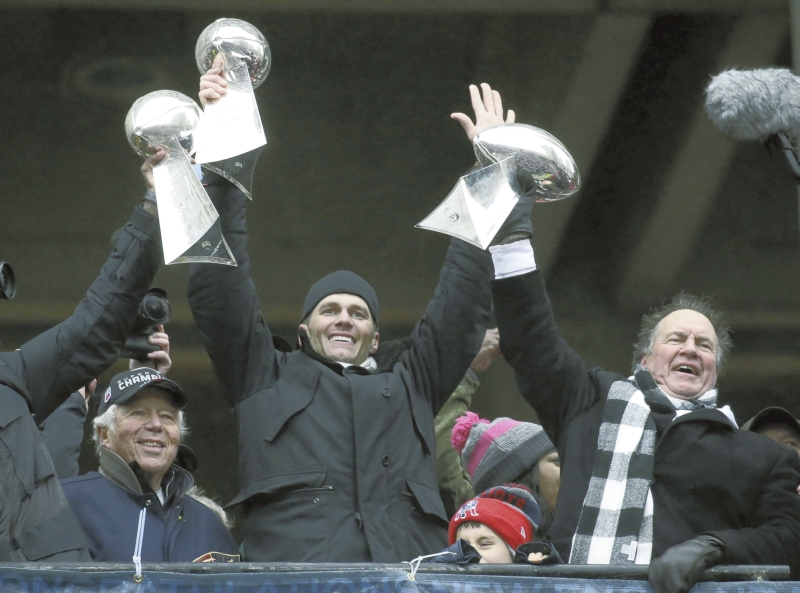 The five-time Super Bowl winners received a hero’s welcome as they paraded through downtown Boston aboard World War II-era duck boats that have become a staple of the city’s recent title celebrations.

Sounds of “Brady! Brady!” ‘’TB12!” and “MVP” rang out throughout the procession as fans proudly wore No. 12 jerseys over thick parkas and sweaters, holding signs declaring star quarterback Tom Brady the G.O.A.T. — the greatest of all time.

Brady grinned and just took it all in, at one point tossing footballs back and forth with fans on the route as the duck boats rumbled along.

“We’re going to remember this one for the rest of our lives and we know you will too,” he shouted from a stage at the parade’s end at City Hall. “I told you we were going to bring this sucker home and we brought it home!”

Cannons shot out red, white and blue confetti along the route, which started near the Boston Marathon finish line, where three spectators were killed and 260 others wounded in bombing attacks in April 2013. The route wound past famous city landmarks such as historic Faneuil Hall and the Boston Common.

Fans were still in disbelief over New England’s stunning 34-28 comeback win in overtime against the Atlanta Falcons.

“We were all sweating bullets the whole time, and then we saw the best comeback in the world and the greatest thing we’ve ever seen,” said James Mastrangelo, a Quincy, Massachusetts, resident decked out Mardi Gras-style, with a red, white and blue mask and Patriots sneakers, sweater, gloves and hat.

Phyllis Barone, of Saugus, Massachusetts, held up a large cardboard cutout of Brady and did her best to join the boisterous crowd in rowdy chants of “Go Pats.” But her raspy, weakened voice betrayed her.

“Three days of cheering. I’m surprised I still have anything left,” she said. “I’m a true die-hard fan.”

Stephen Skobeleff, of Winthrop, Massachusetts, said he’s tried to bring his two teenage children to as many championship parades as he can.

“For years and years and years we really didn’t have anything but the Celtics,” he said of the city’s NBA team. “Every parade I get nervous that it will be the last one.”

Along the route, Patriots players held up some of the team’s five Lombardi trophies.

Fan favorite Rob Gronkowski, who went down with an injury before the team’s playoff run, energized the crowd with his typical Gronk antics. The tight end took off his shirt and chugged beers tossed up to the duck boats by fans, while other players held a wrestling championship-style belt over his head.

There’s little love for Goodell in Patriots Nation after he handed Brady a four-game suspension at the start of the season for his role in the “Deflategate” scandal, a dispute that wound through federal court twice as the NFL found Brady responsible for using underinflated footballs during a playoff game in 2015.

Once again on Tuesday, the 39-year-old Brady was unquestionably the center of attention.

The crowd showered the MVP of Super Bowl 51 with chants of “MVP” and “We Want Six” as the snow, which fell in thick wet clumps most of the morning, broke just long enough for Brady and others to speak onstage.

“They came to work every day and there were no days off,” he said.

The typically gruff, no-nonsense coach led the crowd of thousands, who likely skipped school or work to fete their team, in an impromptu chant: “No days off!”