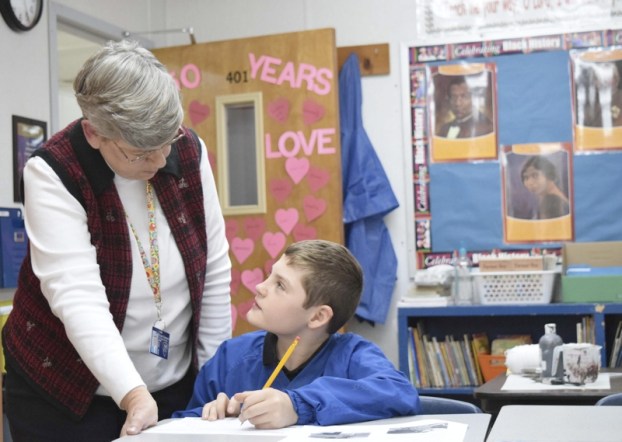 Susan Colosanti, left, works with student Joshua Hastings. Colosanti, who now teaches third grade, started as a second grade teacher at North Hills Christian School 40 years ago. She said she felt that God called her to teach at the school. Rebecca Rider/Salisbury Post SALISBURY — When Susan Colosanti stepped into North Hills Christian School in the 1970s, she said it felt like home.

“It’s pretty much been my life for the time that I’ve been here,” she said.

This year marks Colosanti’s 40th at North Hills, and her 46th year as a teacher. For most of that time, she has held the fort down as North Hills’ third-grade teacher. But she didn’t start there.

Colosanti was a member of the Gardener-Webb University School of Education’s first graduating class in 1971. She got a job that same year, teaching at a rural public school in another county.

For six years, Colosanti bounced among kindergarten and first and second grades. She carpooled to work each morning. But as time wore on, she became dissatisfied with the school’s atmosphere.

“Every Monday when people would get in the carpool, they would say, ‘Oh, I wish this was Friday,’” she recalled. “And they didn’t seem to enjoy their work.”

Teachers at the school didn’t help each other or share ideas, she said. So Colosanti turned her sights elsewhere — searching for a job near where her family lived in Salisbury.

“And the Lord led me here,” she said of North Hills.

Colosanti taught second grade her first two years at North Hills before moving to third, where she’s been ever since.

Teaching at a small private school — which in 1977 was still relatively young — Colosanti said she found the freedom to implement the lessons and ideas that she’d been holding on to. And most important, she was free to share her faith.

While prayer in the classroom and over meals was allowed at her former school, Colosanti said she loved having the opportunity to more fully share her faith with her students and their families.

Initially, Colosanti said she wanted to be a pediatric nurse. She switched to teaching to avoid giving shots.

Her students’ excitement about learning is her favorite part of being a teacher.

“I like the opportunity to see children — to see the lights go on when they understand something,” she said.

By third grade, she said, students begin to relate their faith to what they’re learning in the classroom.

“And they’re beginning to see God’s hand in the world around them,” she said.

After 40 years, Colosanti said, it can be hard to keep lessons fresh and new; the temptation is to do things the way she’s always done them. But each group of children is different, though Colosanti said she does see familiar faces from time to time.

That’s because it’s not uncommon for her to teach the children of former students. Sometimes entire families will come through her classroom, one child at a time. Colosanti said she’s always happy to see her former students, now grown up and with families of their own.

“It’s always interesting to see what they have become as they’ve grown up,” she said.

In the coming years, she may see a few more of them. Colosanti doesn’t plan to retire just yet.

“God called me here, and he hasn’t told me it’s time to go,” she said.

She plans to teach full time for at least a few more years, then switch to part time if possible.

“I don’t think I could just walk away,” she said of the school.

The staff members at North Hills has become her family in the past 40 years. They’ve shared ideas, helped each other out and pitched in when there was a need. Colosanti’s fellow teachers were there for her when she got married to her husband, Jim, 28 years ago, and they were there when her parents passed away.

When asked if she thinks she will leave a legacy at North Hills, Colosanti said that’s not something she dwells on.

“I’m here to do the job that God called me to do and not worry about the rest of it,” she said.

By Mike London mike.london@salisburypost.com CHARLOTTE — Carlos Dixon could have squeezed another year or two out of his basketball playing career, but... read more