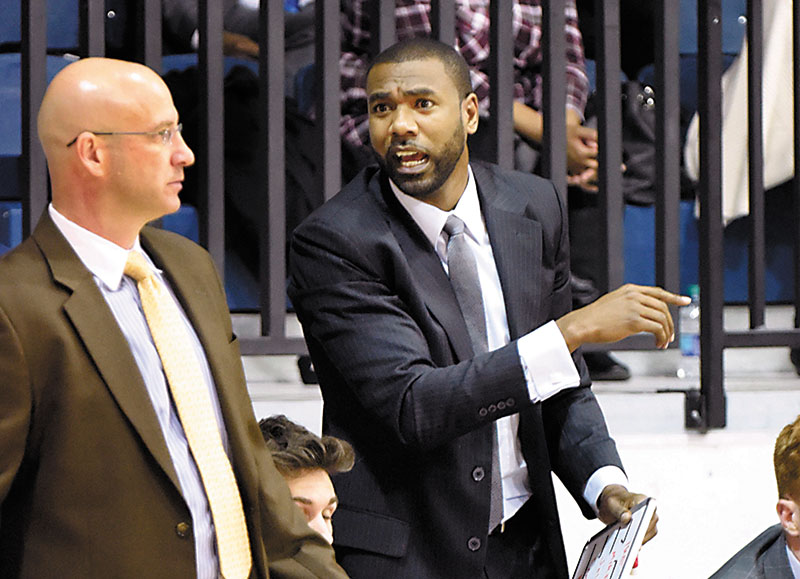 CHARLOTTE — Carlos Dixon could have squeezed another year or two out of his basketball playing career, but with his 35th birthday approaching last summer, the South Rowan graduate had a decision to make.

“There were a couple of offers to think over,” Dixon said. “I could have gone back to Bahrain for another season.”

Bahrain, an island nation off the coast of Saudi Arabia, is 7,000 miles away. Dixon has learned to deal with endless plane flights as well as barriers in language and customs during his long basketball odyssey. The 6-foot-7 shooting guard has drilled 3-pointers on four continents and has learned how to hail a taxi or get a meal in a half-dozen languages, so playing a familiar game in a strange place is no longer an issue for him.

But he knew he wasn’t getting any younger. He decided the timing was right to move on to the next phase of his life.

“I was just a kid from Salisbury, a small town, but basketball allowed me to see all the corners of the world, and I consider that a great blessing.” Dixon said. “But it’s time to pass on some of my knowledge to the younger guys. It was time to get into coaching and see what kind of opportunities were there for me.”

As an athlete who earned a degree from Virginia Tech before putting his heart and sweat into 11 seasons of pro basketball, mostly in China, Korea, Argentina and Japan, Dixon had instant credibility.

“I sent out e-mails to a lot of schools in the Carolinas,” Dixon said. “Division I and II. Queens University got back to me right away. My first chance to coach came with a great program. Queens welcomed me with open arms.”

Dixon became part of a five-man staff at Queens, one of four assistants for head coach Bart Lundy at the respected Charlotte school.

Dixon was accepted immediately by the players.

“I got a chance to work with some of our players during a summer camp, and I think the players Googled me and saw that I’d played some,” Dixon said. “They’ve made the transition easy for me.”

Queens (21-1) is a D-II powerhouse, ranked seventh nationally and winning by an average margin of 15 points. Queens leads the South Atlantic Conference, a tough league that also includes schools such as Lincoln Memorial, Wingate, Catawba, Carson-Newman and Newberry.

“We’ve got at least four guys that should have a chance to play professionally,” Dixon said. “I give them some advice, and it means a lot to me to have a chance to help them. The biggest thing for them to realize is that there are a lot of talented guys out there who want to play pro ball. They have to keep working on their skills every day.”

Dixon’s duties include a little of everything. He handles scouting assignments and he’s heavily involved in recruiting.

There are a wide range of arenas and gyms in the SAC, ranging from the 5,000-seat Tex Turner Arena to Brevard’s 1,000-seat Boshamer Gym. Dixon has enjoyed experiencing those new venues on game days.

“Some places the crowd is right on top of you,” Dixon said.

Dixon played only two varsity seasons at South Rowan after transferring from Salisbury High. South played in the 4A Central Piedmont Conference in those days against some tremendous talent, especially from R.J. Reynolds and West Forsyth.

In his senior season with the Raiders (1998-99), South won only two league games and only played 25 total games, but Dixon set a school record that still stands by pouring in 610 points. His 24.4 points per game that season remains a school record, as does his career average of 18.8 points per game. He played in the East-West All-Star Game in Greensboro the summer after graduating.

Dixon signed with UNC Greensboro, but when UNC Greensboro coach Randy Peele was fired, Dixon was released from his commitment. He elected to attend Fork Union Military Academy for a year, and his profile was raised considerably playing against top-notch competition. After that year, he had offers from Virginia Tech, Rutgers, Seton Hall, Providence, Texas, South Carolina and Alabama, among others.

He chose Virginia Tech, partly because Peele had been hired there as an assistant for head coach Ricky Stokes.

Dixon became a solid player for struggling Virginia Tech teams that competed in the Big East Conference during his freshman, sophomore and junior seasons.

A fractured foot sidelined Dixon prior to his senior season, but it was a blessing in disguise. Sitting out a season as a redshirt meant that Dixon was still on campus for Virginia Tech’s initial season of Atlantic Coast Conference competition in 2004-05. He had a fine year for coach Seth Greenberg, and many of his memorable college moments came that season.

“Coach Greenberg made me more of a complete player,” Dixon said. “He wanted me to post up more, attack more.”

As a senior, competing in the ACC, Dixon averaged 13.8 points per game while shooting 41.2 percent from 3-point range. He averaged a career-high 4.5 rebounds. Virginia Tech went 16-14, its best season in many years, and played in the NIT.

Dixon always will have a place in Virginia Tech lore because of his steal-and-dunk against Clemson that clinched the first ACC win in the Hokies’ roundball history.

Dixon made a game-winning jumper that season against Georgia Tech and had a six-steal game against Wake Forest, but it was an upset of Duke that provided his fondest college memory. He had 18 points and nine rebounds against the Blue Devils  — tormenting J.J. Redick — and he came through with a game-deciding assist when two Duke players appeared to have him trapped.

“I didn’t get recruited by any of the big schools in North Carolina,” said Dixon, a Florida State fan growing up. “So beating Duke felt great.”

Then he was invited to the Portsmouth Invitational Tournament, a showcase where NBA scouts sized up the standout college seniors with NBA potential.

It was a temporary disappointment when he went undrafted by the NBA, but he turned that adversity into a long, productive pro career overseas.

Argentina was his favorite place to play. His only experience in Europe wasn’t a positive one — he found himself in a surprisingly rough league in France — but in Asia he found the free-wheeling uptempo style of ball he loved.

His best seasons came in Japan, where he was Honorable Mention for the all-league team three times and played on championship squads. There were seasons in which he shot better than 50 percent while leading squads with exotic names such as the Ryukyu Golden Kings, Iwate Big Bulls, Fukoza Rizing and Gunma Crane Thunders.

It’s the first time Dixon has been in the states at this time of year since he was in college. He’s making the most of it.

His older brother, Marvin, coaches Barber-Scotia in Concord, so they’re not far apart. Over the weekend, he sent out social media birthday greetings to his mother, Hattie Steele, who still lives in Salisbury

It’s different competing as a coach, but Dixon is making the adjustment.

“It’s still basketball,” Dixon said with a laugh. “I just have to dress up a little bit.”