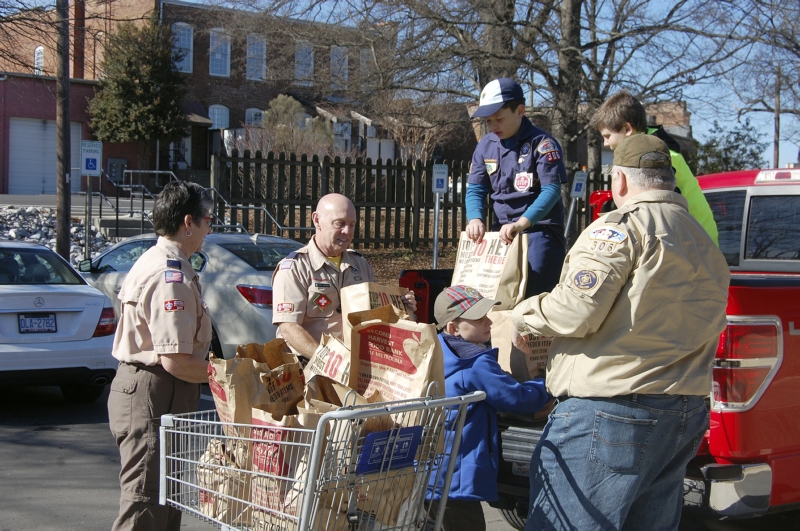 SALISBURY — Boy Scout packs visited neighborhoods all over the county to collect food for local food pantries during the “Scouting for Food” event on Saturday.

Once a year, Boy Scouts go around to different neighborhoods and drop off bags and explain the food drive to neighbors. A week later, they return to those neighborhoods to pick up the donated food and deliver them to local food pantries.

John Barber, an adult leader for Pack 306, said the boys did all of the talking while visiting neighborhoods.

This was the first year kindergarteners were included in the event. Barber said sometimes they forgot what to say to the neighbors, but the older kids they were paired with were able to help them out.

Barber said the event helps get the boys out into the community and talking with people.

It is also a chance to talk with the boys about poverty and those who do not have the same opportunities as they do.

“It makes them realize not everyone is as fortunate as they are,” he said.

Kelly Hunsucker, cubmaster for Pack 375, and his scouts collected food in the China Grove area. He said the event teaches the scouts about their duty to their country and to helping others. He said it reinforces their lessons on being a servant leader.

Jeff Bays, district director for the Boy Scouts of America, said the boys were earning service hours and helping the community with the food drive, which is what the Boy Scouts are all about.

Bays said there were 50 scouting units in the county and the majority of them were out in the community collecting food on Saturday.

The scouts also reached out to North Hills Christian School to help with the drive. The school ended up donating 1,200 pounds of food.

At Rowan Helping Ministries, the scouts, adult leaders and other volunteers brought the donations in from vehicles, weighed the bags and sorted the food for the pantry.

Kris Mueller, director of resource development at Rowan Helping Ministries, said the food pantry had been low lately because of the busy holiday season.

“That depleted us pretty heavily,” she said.

Mueller said the annual donation from the scouts and Sunday’s donations from the “Souper Bowl of Caring” event, during which youth groups collect food and funds from their churches on Super Bowl Sunday, helps restock the shelves.

“Hopefully we’ll be in a little better shape,” she said.

Food drives like “Scouting for Food” help fill the gap in food donations for this time of year.

“We’ve kind of relied on this being a big part of our year,” Valentine said.

Ann Barber, adult leader of pack 306 and chairperson for the event, said the event was truly a community effort, and the high energy of the scouts and adult volunteers was encouraging.

Davie woman to appear on Wheel of Fortune