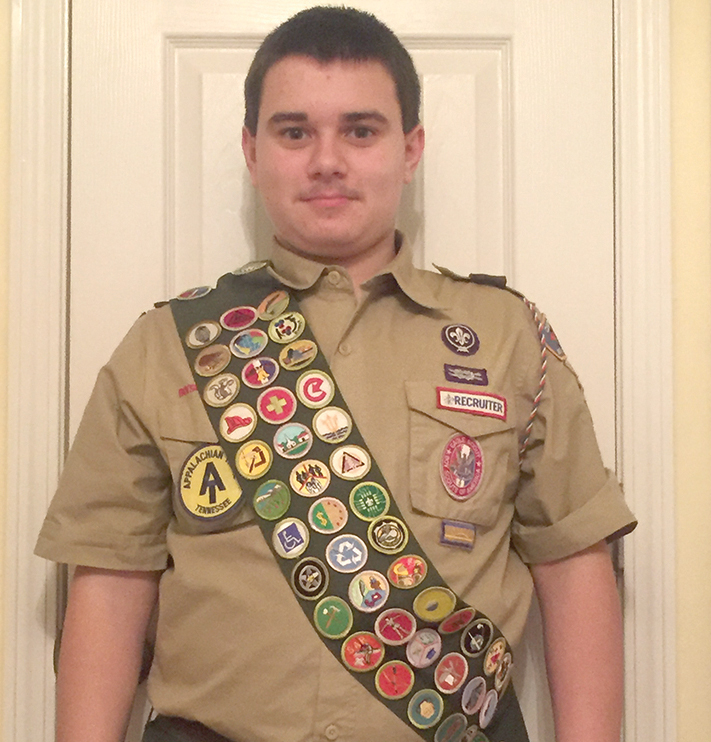 Nikolas has been in scouting for eight years (five years as a Cub Scout with the help of Cubmaster Neal Powell and three years as a Boy Scout with Scoutmaster David Wilson and Assistant Scoutmaster Bruce Kolkebeck). As a Cub Scout, he earned the Arrow of Light, as well as the God & Me and God & Family awards.

As a Boy Scout in Troop 442, he has earned 56 merit badges, as well as the World Conservation Award and a 50 Miler award for canoeing. Nikolas plans to complete an extended backpacking trek at Philmont Scout Ranch this year. He has served the troop as an Assistant Patrol Leader and Den Chief, which involved assisting Cub Scouts and helping to prepare them for the transition to become Boy Scouts.

Nikolas is a student at Southeast Middle School where he serves as a photographer on the yearbook committee. His other interests include weekly service at Rowan Helping Ministries, hiking, pottery, reading and astronomy. He has completed over 165 hours of community service and over 50 nights of camping, including 11 overnight canoe trips.

Nikolas stresses the importance of teamwork and acknowledges that he doesn’t believe that the majority of these achievements would have been possible without the assistance of his fellow scouts and all of the leaders that have helped him along the way.

For his Eagle Scout Leadership Service Project, Nikolas focused on making improvements to the nature trail at Southeast Middle School. These improvements consisted of clearing debris from the trail, using recycled split rail fence to create ‘trail runners’ along the sides of the path, and installing trail markers on trees to create better visibility. Nikolas also built a kiosk that included a map of the entire trail as well as photos and descriptions identifying plant life encountered on the trail. Since the completion of the project, the school’s science and history departments have both taken students for walks on the rejuvenated trail and have incorporated it into lesson plans. Nikolas is currently working with the school’s principal to initiate a ‘trail maintenance committee’ that will help keep the nature trail maintained.