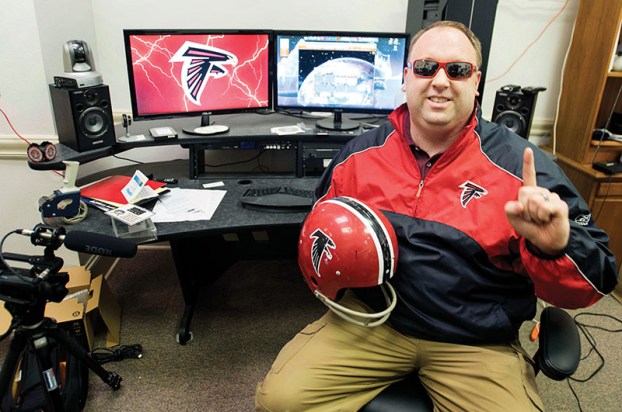 JON C. LAKEY / SALISBURY POST Growing up in Atlanta, City of Salisbury's Jason Parks has long been a Falcons fan. In advance of the upcoming Super Bowl 51 between the Atlanta Falcons and the New England Patriots, local fans are pulling out all the stops to share their enthusiasm for their teams. Wednesday, February 1, 2017, in Salisbury, N.C.

N.C. connections to the Super Bowl

So while you’re watching the New England Patriots and Atlanta Falcons this Sunday in Super Bowl LI, chew on these big-game fun facts, compiled by the N.C. Department of Natural and Cultural Resources:

• Number of microbreweries in North Carolina: 180. This is according to the North Carolina Craft Brewers Guild, which says more local breweries are in development.

• Number of times the Carolina Panthers have been to the Super Bowl: two. The first time was Super Bowl XXXVIII in 2004, when the Panthers lost to the New England Patriots, 32-29. (This also was the Super Bowl that gave us Janet Jackson’s infamous halftime “wardrobe malfunction.”) The Panthers played in Super Bowl L last year, but lost to the Denver Broncos, 24-10.

• First musical act to perform at halftime: Up With People at Super Bowl X. Originally, halftime shows consisted mainly of local marching bands. The trend of having big-name stars perform, such as this year’s headliner Lady Gaga, started in the early 1990s in an effort to keep viewers from changing the channel during halftime.

• Cost of a 30-second advertisement: $5 million. After all, some of us only watch for the commercials.

SALISBURY — Jason and Crystal Parks are expecting the birth of their second son, Luke, in about 10 days.

Jason is prepared, as any good Atlanta Falcons fan would be. He has printed out, from the Newborn Fan Club, a birth certificate signifying that Luke will come into this world as an official Falcons fan.

Today, when the Atlanta Falcons face the New England Patriots in Super Bowl LI, Jason plans to project on his garage door a giant Falcons insignia with lightning bolts flashing around it.

Inside the house, with Falcons party items and memorabilia around him, Jason will be wearing one of his many Atlanta shirts and jackets. He’ll watch the game on a 120-inch television projection screen with surround sound.

“I don’t care how many balls they deflate,” Parks says of the opposing Patriots. “… This time, we can only beat ourselves. It’s one of the best offenses the NFL has ever seen.”

It’s actually easier to find Patriots fans than Falcons fans, thanks to New England’s long-running success and a good number of transplanted Yankees who have made Rowan County their home.

Born and raised in the state of Maine, 50-year-old David Holman can’t remember not being a Patriots fan. He’ll either be watching today’s Super Bowl at his brother’s house or in his own sunroom, where a banner identifies it as the Patriots Man Cave.

Holman receives more respect, he says, when those same folks realize he was born a Patriots fan and never wavered in his love for New England, even when the Patriots had horrible teams before this long-running Bill Belichick-Tom Brady era.

The Patriots spawn plenty of detractors.

“As time progresses,” Holman says, “they become more and more hated because of their success. It’s not easy. I have a lot of good friends who will be rooting against the Patriots.”

Holman, daughter Sarah and son Nicholas love any professional team connected to Boston — the Patriots, Celtics, Red Sox and Bruins. Nicholas, a college student, has apps on his telephone to give him in-game updates on all of those teams.

“This is his favorite time of year,” David Holman says. “He’s in heaven right now.”

Holman, a senior in high school when the Chicago Bears beat his Patriots in the Super Bowl, has lived and worked here since 1993.

The same has to be said for Joe Lancione, a transplanted New Englander who has followed the Patriots since their first season in 1960. He can even sing the Patriots’ original fight song from 1960 that virtually no one else remembers.

“I can’t get anyone to agree there was one,” Lancione says.

As a member of the American Football League in the early years, the Patriots (originally the Boston Patriots) played in a lot of different venues.

Lancione attended the Patriots’ first exhibition game in Rhode Island. He was one of 21,597 people taking in their first AFL game at Boston University Field on Sept. 9, 1960, a 13-10 loss to Denver.

There was a time, Lancione recalls, when the Patriots played in Fenway Park, home of the Red Sox.

The ownership finally settled the team in Foxborough, Mass., where the Patriots play in Gillette Stadium. The original Foxborough venue, Schaefer Stadium, is now a parking lot for the new one.

Lancione was in the Army when his Patriots suffered a crushing 51-10 loss to the San Diego Chargers in the 1963 AFL championship game. And he will remind you of all the years the Patriots were a losing team in the AFL and NFL.

“There are some Super Bowls I barely recall,” Lancione says.

He prefers to watch the Patriots’ big games at home because he describes himself as “a very bad loser and a very bad winner.” When the Patriots prevailed against the Seahawks in the final seconds of their last Super Bowl appearance (2015), Lancione says he had to be scraped off the ceiling.

Salisburian Kristen Hodges became a New England Patriots — and Red Sox — fan when she was attending school in Boston.

She met her husband, Andrew, there. They married on Cape Cod in 2004, during a time when the Red Sox were winning their first World Series in more than 80 years.

The Hodges’ three children, who range in age from 5 to 12, all have become Patriots fans — as if they had a choice. The whole family will be wearing New England jerseys today, and the Super Bowl menu items will include Samuel Adams beer for the adults and New England clam chowder for all.

“We’re watching it with friends,” says Kristen, who will also be Facetiming with people in Boston during the game. “We like to be with other Patriot fans.”

“I liked the way Belichick coached and the way Tom Brady had to prove something,” Barringer says.

Barringer has two daughters, 7 and 5, and they are Carolina Panthers fans. Barringer blames their teachers, but he has been working on the youngest daughter, trying to sway her over to his Patriots camp.

Barringer has set a goal of seeing the Patriots play in person next year in Foxborough when they take on the Panthers. But there is this Super Bowl business to take care of first.

“One more, one more,” Barringer says, looking to today’s game.

Doug Rice, an Atlanta Falcons fan since their first season in 1966, believes in numerology. It has been 51 years since the Falcons were established, and Sunday’s game is the 51st Super Bowl.

A Falcons win may be in the stars, or numbers.

President and lead anchor for Performance Racing Network, Rice became a Falcons fan as a kid because everybody around him seemed to be a Redskins fan.

“I didn’t want to be like everybody else,” Rice says.

It also helped that the mascot for Rice’s high school — West Rowan — was the falcon. Rice wore No. 61 playing for the West Rowan Falcons football team, and four years ago, his daughter bought him a Falcons No. 61 jersey with “Riceman” as the name on back.

Rice also likes “61” because his daughter was born June 1.

Rice and his wife are a bit superstitious. They have a big Falcons flag they usually fly outside their Salisbury home on game days, but they decided against displaying the flag during the playoffs — until a Super Bowl victory is in hand.

Rice thought about bringing home two Atlanta Falcons helmets from his Charlotte office, but he decided not to tempt fate, since the Falcons have been winning.

For game day, he’ll be wearing the same Falcons T-shirt he has worn during their six-game win streak. Otherwise, when he and his wife host their Super Bowl party, they won’t be following any time-honored routines.

“Falcons fans don’t have a lot of experience watching the Super Bowl (with the Falcons in it),” Rice says. “… People better show up wearing black and red.”

Parks, video services coordinator and television station manager for the city of Salisbury, devoted a corner of his office this past week to his Atlanta Falcons gear.

He displayed black and red Atlanta helmets, a quarterback Matt Ryan figurine, a vintage Falcons gym bag, a piece of the old Astro Turf from the Georgia Dome, a Falcons flag and an antique Falcons peanut dispenser.

Parks routinely wears Falcon sunglasses, jackets, shirts and shoes. His car sports an all-black Falcons license plate. If he has any ritual or superstition on game day, it will be to drink out of a plastic Falcons cup that’s more than 30 years old.

Parks came by his allegiance to the Falcons honestly. Both of his parents were Rowan County natives, but Parks and two brothers were born in Atlanta while their dad was working there as an air-traffic controller.

The family moved back to North Carolina when the boys were still young, but Jason took his Falcons devotion with him.

The black and red colors of the Falcons have served Parks well because he also holds diehard allegiances to N.C. State University sports and the Carolina Hurricanes hockey team. “All my teams are red,” Parks says.

His 4-year-old son, Logan, already is an exuberant Falcons fan who watches the games with Jason. As for the yet-to-be-born Luke, well, he already has his papers.