Salisbury Police Chief: Staffing is one of greatest goals for 2017 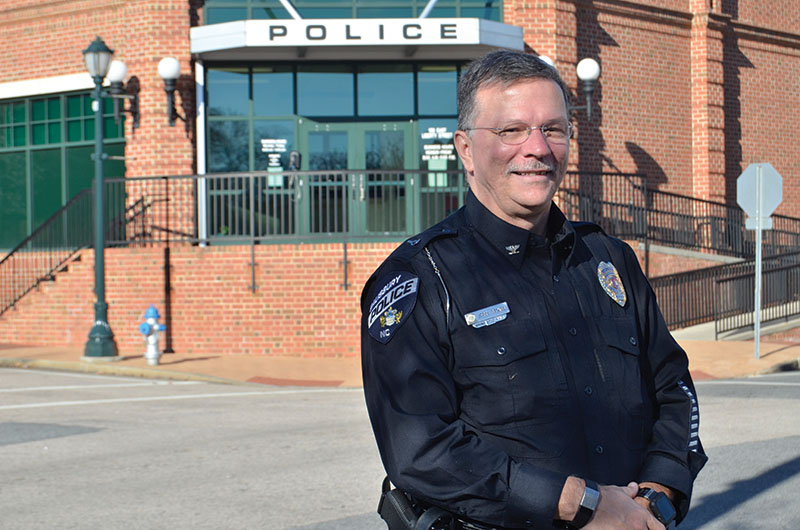 SALISBURY — Staffing has been a concern for the Salisbury Police Department for a few years now with a number of firings, resignations, transfers to other agencies and retirements. But it’s one of the nine goals of greatest importance this year for Police Chief Jerry Stokes.

The areas of focus include additions to staff, seeking partnerships with the faith-based community and having all officers trained to handle crisis intervention.

The goals were given to employees at the beginning of the year and shared with a group of citizens at a Salisbury Neighborhood Action Group (SNAG) meeting. The goals share similar concepts to those outlined in the 21st Century Policing Pillars. The community policing and crime prevention pillars came from a 2014 Task Force established by President Barack Obama.

Stokes held a strategic planning meeting with his administrative staff that consisted of his captains and lieutenants who discussed areas of focus and goals for the department.
Stokes said he used the pillars as a guide.

He admitted there is an element missing and that’s a community component where the citizens are involved in helping determine goals and success measures.

One of the pillars outlined by the Obama Task Force has law enforcement agencies collaborate with community members, especially those disproportionately affected by crime, to help develop strategies for deploying resources aimed at reducing crime. The idea is that this relationship fosters cooperation and community engagement.

Various community leaders and citizens have raised the issue of the community partnering with the police to establish some policies.

Stokes does intend to partner with the faith-based community, particularly local pastors who’ve expressed a desire to assist with the enhancement of community engagement. Stokes said he wants to implement this faith-based partnership by June 30.

Already in place is an officer who has been reassigned and whose main focus is recruitment.

The police department currently has 15 vacancies. Of those, three people just started — two are attending basic law enforcement training (BLET), and one will begin field training in the next week or so.

He explained those new hires are not responding to calls, so “operationally they are future officers.”

“I like to say we have 18 ‘operational vacancies’ because the three in training aren’t policing yet, they are going to be great officers in the future, but we have to get them trained and ready first,” Stokes said.

He added that the police department is in a round of processing a number of applicants now and hope to have more people on board in the near future.

By Dec. 31 the chief hopes to build and maintain the workforce of the department at a level of at least 90 percent of authorized staff.

Another goal addresses the unsolved homicides in the city, which number at least 16 — seven of which occurred last year.

Stokes hopes to be able to solicit help from the State Bureau of Investigations for inclusion in a cold-case program. There may also be an opportunity to use reserve officers with prior investigative experience to provide additional staff resources. The idea is to have those reserve detectives review pending homicide cases on a part-time bases.

Stokes said there are still some details that must be worked out including how many hours these officers can work as retirees. If the retired detectives could work on homicide cases or minor cases, it would free up investigators to focus on violent crimes.

The plan has been to implement these reserve officers by April 1.

The chief has wanted to expand the current training program to include having all of the officers complete training in Crisis Intervention Team skills for handling people in mental health crisis. The goal is to have 80 percent of patrol-assigned officers complete this training by the end of the year.

Stokes’ aim is to increase the budget allocation for department training to an acceptable per officer level beginning in the 2018 fiscal year. He said at the same time, the police department will develop a plan to allocate the additional funding for effective work group and officer skills development.

Stokes said many of the officers have already been trained.

“One of the things about goals like this is we have to examine our situation and determine the need, so we know this was an important area, by setting a goal related to it we have assessed what we need to do to be better and found we’re in good shape,” Stokes said.

In light of national and local events that have exposed the rifts in the relationships between the local police and the community, goals like these are part of the steps to mending those rifts.