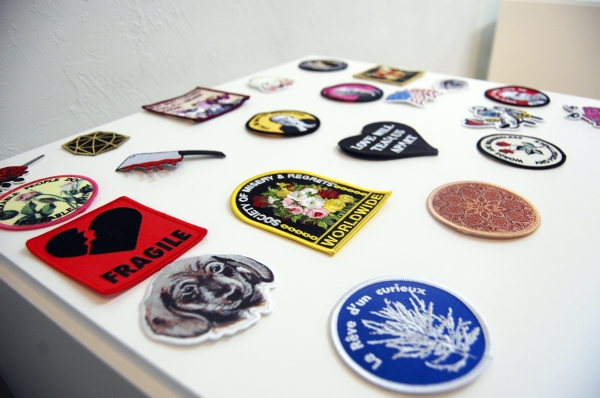 Amanda Raymond/Salisbury Post Ball & Chain Co. got its start selling patches through Instagram. Soon it will have a showroom and store at 105B N. Main St. in downtown Salisbury.

SALISBURY — For months now, a pair of eyes have been looking out from the windows of a building on West Innes Street.

The man responsible for the tapestry goes by the name Woodie. He said he just wanted to do something interesting with the windows, and that is what he came up with.

He is actually thinking about changing the tapestry pretty soon.

Also coming pretty soon, a showroom and store for Woodie’s business, Ball & Chain Co., which currently has a warehouse at that building on West Innes.

Ball & Chain Co. will hopefully open its first storefront at 105B N. Main St. in April.

Ball & Chain Co. sells apparel, accessories, jewelry and homewares. Some of the items feature floral designs and others have different quotes and sayings.

The thing that makes Ball & Chain Co. different from other companies is that some of its products are on the dark and edgier side. One of his patches is a black heart that says, “Love will tear us apart,” with a jagged line down the middle. Another patch features the words, “Words are meaningless and forgettable,” encircling two roses.

Not all of the products are on the darker side — some of his pins are pastel-colored magnolias in honor of Magnolia Park on 130 W. Innes St.

The company started with patches and pins to attach to clothing. He sold his first patch by posting it on Instagram and it sold out overnight. Since then, the account’s 68,000 followers have kept Woodie busy.

Woodie said the business has about 500-600 orders per week. He and his staff, which includes his brother and wife, release 25-30 new products a month.

Woodie designs all of his products. Some of the sayings are song lyrics, while others are things that pop into his head while he is going about his life.

“Some of it’s just things I see or read,” he said.

Woodie was born in Salisbury and grew up in China Grove. He previously designed patches for another company, but ended up quitting that job.

While a stay-at-home-father with his two daughters, he started designing his own patches.

Woodie’s a self-taught graphic designer, and said his life experiences, from playing around with Microsoft Paint to skateboarding, have helped develop his creativity.

“I think you’re learning to express yourself in your own way,” he said about skateboarding.

Woodie said he is not sure why his patches have been so successful, but people all over the world have been responding well to what he calls his “dark humor.”

“I guess it spoke to people,” he said.

Woodie’s business has been featured on Vogue.com and Vogue Italia, Bloomberg Businessweek and the Huffington Post, to name a few. One of his patches was worn by Cindi Leive, editor-in-chief of Glamour Magazine, during the Women’s March, and Gemma Styles, sister to former One Direction band member Harry Styles, is a repeat customer.

Woodie is now working with Alpha Industries, a clothing company, and Barneys, a department store chain headquartered in New York, on an upcoming project.

And that’s all happened in less than a year of business.

He has had the space for the retail store since September, but he has been so busy he hasn’t had time to actually open it.

Woodie said he wants the store to be more like an art gallery. There will only be one of each product out on the floor. There will be jackets and sweaters for people to feel and patches and pins will be on stands under glass.

He said he wanted to open the store because people enjoy seeing and feeling the products before they buy them.

Though pins and patches will always be the foundation of his business, Woodie said he hopes to increase his houseware selection. He is currently working on new accessories for the spring.

He said he was thankful and humbled by his success and is still working to process all that has happened.

“I honestly felt like it hasn’t sunk in,” Woodie said.