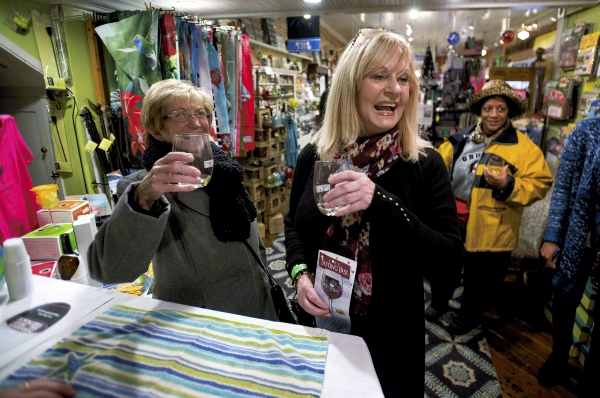 SALISBURY — The night was a little chilly, but it was nice and warm inside as the wine flowed at businesses during the fourth annual Wine About Winter on Friday.

Wine About Winter is a Downtown Salisbury Inc. event that turned downtown into a big wine-tasting crawl. The 38 locations that participated had different types of white and red wines, including some from local wineries Old Stone Winery and Cauble Creek Vineyard.

All of the wines at the tasting were available for purchase at Salisbury Wine Shop, 106 S. Main St.

This year’s event sold out of tickets a couple of days in advance.

At the start of the night, wine lovers picked up their maps, tasting passes, souvenir wine glasses and Sommelier corkscrews from the lobby of 204 E. Innes St.

The locations were divided into districts and color-coded on the maps. If people visited at least four stops at each district, they could return their maps to 204 E. Innes St. to be entered into a drawing for prizes.

Many businesses had snacks available for people to munch on while they sipped their wine.

Manager Brittany Gobble said that because people had to finish their wine inside the stores, they had a chance to look around and, hopefully, purchase something.

“It kind of brings (business) up a little bit,” she said.

She said she had seen an increase in sales for the night and that most people who came into the store made a purchase.

Pam Coffield, owner of Stitchin’ Post at 104 S. Main St., said the hope for business owners is that people will buy something, but the exposure alone is also good. She said Wine About Winter and other events bring people into stores they may not otherwise patronize.

Coffield said many people are surprised by the variety of products available in Salisbury’s downtown.

At previous wine crawls, Coffield said, people have called the store the next day to ask about items they saw the night before.

“We know that it works because of feedback like that,” she said.

Jesse Miller, an employee at Simply Sassy at 207 S. Main St., said the event allowed business owners and employees to meet new people and make a couple of sales.

“We’ve had a lot of people asking for business cards,” he said.

Peggy Ricke and Judy Barnhardt, neighbors turned friends who live in Salisbury, said they were enjoying the wine tasting. They sipped chardonnay at Stitchin’ Post.

It was Ricke’s first time at Wine About Winter, and she said she liked the chance to do something fun with a friend.

“I’m enjoying it, and I’m not really a wine drinker,” she said.

Barnhardt has been to Wine About Winter twice before and said she enjoys visiting new businesses that she has not been to before.

Erika Mcrae, who lives in Salisbury, tasted a dry red wine at Simply Sassy with Amanda Moore from Cleveland.

Mcrae said she doesn’t have much time to shop downtown, but the event gave her a chance to do a little window shopping so she could come back another day to shop.

Moore said the event was great for downtown Salisbury and it allowed her to taste a lot of different kinds of wine.

“I like a chance to sample all the different wines and find what I really like,” she said.