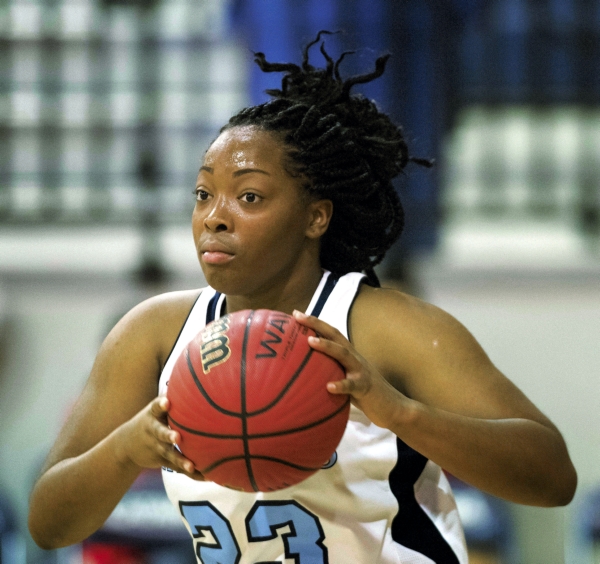 The Falcons stumbled down the stairs against visiting Concord — yet landed on their feet and walked away with a 53-50 SPC victory.

“We made it harder than it had to be,” coach Ashley Poole said after West 13-8, 8-7) earned a win that barely broke par. “Way too many turnovers. That’s something we worked on in practice (Thursday), but didn’t execute at all tonight.”

The Falcons found reason to celebrate early in the second quarter, when junior Egypt Alexander took a lob pass from teammate Shyann Vaughters and hit a layup to surpass 1,000 career points. It gave West a 21-6 lead.

“It was a great moment, actually,” Alexander said after finishing with a game-best 15 points. “It’s something I’ve worked for, something I’ve wanted. So I went out and got it.”

The game was stopped and Alexander was recognized, a pause the Falcons never recovered from. By halftime their lead was down to 28-20 and by the middle of the fourth quarter it was gone. West finished with 31 turnovers, shot the ball poorly and missed half of its 12 fourth-quarter free throws, including four in the final minute.

“Egypt hit her 1,000th point and we got all excited about that,” Poole explained afterward. “Then it’s like our intensity level went way down.”

West trailed 48-45 after Concord sophomore Miriam Stevenson’s runaway layup capped a 12-2 run with 3:03 remaining. The Falcons played catch-up down the stretch and regained the lead when Mary Sobataka drained a 3-pointer from the left corner with 38 seconds to play.

“I saw the open shot and I know how to take it,” the sophomore said with a post-game smile. “I was just hoping it would go in.”

“I know my teammates were happy for me,” she said. “But they can’t do that. They can’t stop playing. We needed to win and that was our focus.”