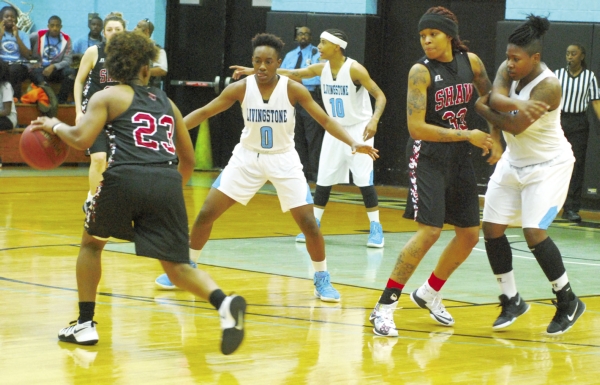 SALISBURY — The Livingstone-Shaw women’s basketball game here Saturday afternoon was like a couple of kids playing “King of the Hill” on a muddy mound of dirt.

There was plenty of clawing and scratching but not much traction. You could get near the top, but then you’d slide right back down.

It was anybody’s game with exactly one minute to go at 60-60. Shaw’s Bears had a key rebound, made three free throws and escaped New Trent Gym with a 63-60 CIAA victory.

“At Shaw, we shot like the perfect game, so we knew today wasn’t going to be the same type of game,” said Livingstone coach Tiffany Silver. “We didn’t have any rhythm today, didn’t get into a flow at all.”

Shaw coach Jacques Curtis said that he employed a different strategy due that first game.

“At our place, Livingstone really hit the 3-ball a lot and we had played a lot of zone defense that game,” said Curtis. “So today, we played more man-to-man, in order to take that away some of that. But it was struggle. Both teams seemed to play tight, for some reason.”

The loss dropped Livingstone (12-10 overall, 7-5 CIAA) out of second place in the conference’s Southern Division. Winston-Salem State defeated St. Augustine’s on Saturday, 57-51, moving to 8-4 in the division.

The Blue Bears trailed for most of the game, finally catching Shaw at 40-40, on a 3-pointer from Bria Patterson with 2:43 left in the third period.

After Shaw briefly regained the lead, entering the fourth quarter, Livingstone forged ahead by four points at 46-42 and 48-44, behind scoring from guards Zena Lovette and Deonna Young.

With 4:47 remaining, a layup from Lovette gave the Blue Bears a 53-50 lead, but she missed the accompanying free throw. Shaw turned the ball over, but instead of going up by more points, the Blue Bears promptly gave the ball right back.

The teams then traded leads before before Shaw’s Imani Heggins gave the visitors a 60-58 lead at the 1:16-mark. Lovette tied it again with two foul tosses at 1:00, and again, the teams exchanged turnovers.

Julia Cordova sank one of two free throws at the 32-second mark, setting the stage for Livingstone to possibly steal the win. However, Lovette’s reverse layup wouldn’t go down with 11 seconds left and Heggins hit two more free throws for a 63-60 lead.

After a timeout by Livingstone at 8.6 seconds, the Blue Bears ran a play that broke for an open look for Young from behind the arc, but her shot went in-and-out just before the buzzer.

“We executed both of those plays perfectly, except for making the shots,” lamented Silver. “The last one, it was for Deonna to take the shot and she had a good look, but we were off from the 3-point line all day.”

Young, a junior guard who had made 40 percent of her 103 3-point attempts this season, was just 1-of-6 on Saturday.

Lovette, who led Livingstone with 22 points and 10 rebounds, accepted the blame for missing the layup at the 11-second mark.

“We do this drill and and it works every time, but this time, it wouldn’t drop” said Lovette. “I was expecting some contact and it didn’t come, so that sort of threw me off a bit. But no excuses, I should have made that shot.

“We just don’t seem to start off as strong as we finish and that’s been a problem the last few games,” continued Lovette. “We’ve been sort of turning the switch on in the second half and pulling games out, but this time, it caught up with us. We’ve just got to fix our mistakes and come back next game, stronger than ever.”

Livingstone had won nine of 11 games prior to Saturday, all since Christmas break when the roster was reduced to just eight players.

And while the end of the game didn’t go the Blue Bears’ way, a potential five-point swing at the end of first quarter contributed just as much to the loss.

Down 18-14 and holding for the last shot of the period, Livingstone turned the ball over with a bad pass. Shaw went quickly upcourt and LaQuisha Taylor drained a 3-pointer at the buzzer, making it 21-14.

“We had 18 turnovers and several were crucial and unforced, which are always more noticeable in a close game,” added Silver. “But Shaw played a better game today, so definitely, the credit goes to them.”

Taylor had game-high totals of 23 points and 16 rebounds to lead Shaw. She made 7-of-13 shots from the field, including 4-of-7 behind the arc.

“She shoots it real well,” Curtis said of Taylor, his junior forward from Charlotte. “On nights when she doesn’t have it going, we struggle to win.”

Livingstone returns to action on Wednesday, traveling to Fayetteville State for a 5:30 p.m. game. The Blue Bears won over FSU at home on Jan. 18, 71-60.

UNC-Notre Dame game moved to Sunday, due to water issues

By Aaron Beard AP Basketball Writer CHAPEL HILL (AP) — The game between No. 12 North Carolina and No. 20... read more