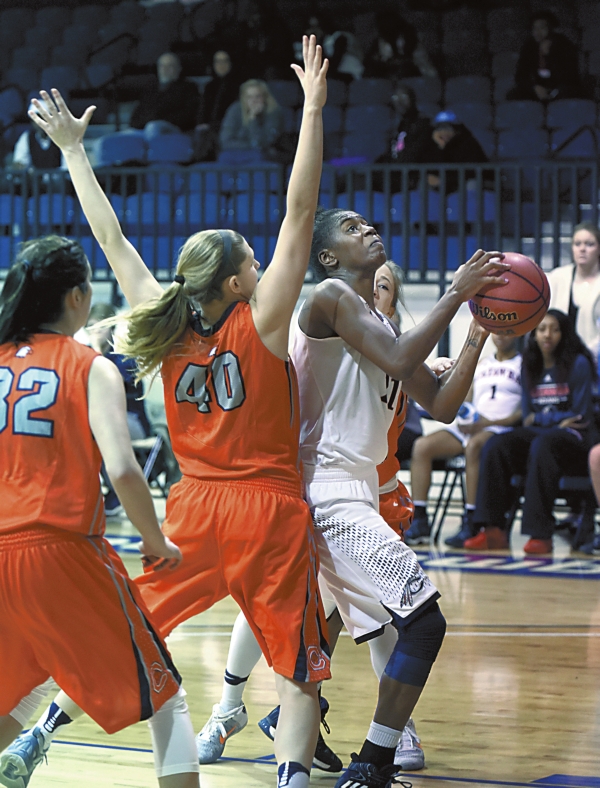 SALISBURY — In a perfect world, 1,000 points would come with rainbows, balloons, smiles — and a victory.

But Catawba junior Terri Rogers reached the milestone on Saturday in Catawba’s 80-76 South Atlantic Conference loss to Carson-Newman at Goodman Gym.  So 1,000 came mostly with solemn pats on the back.

“I’m excited and proud to do it in only three years,” said Rogers, who had 20 points and 10 rebounds. “It’s a great accomplishment, but it’s a bittersweet  feeling when you lose.”

Rogers achieved her 1,000th point when she scored on an offensive rebound early in the second quarter.

It was a hard-to-swallow setback for the Indians, who had lost earlier, 83-79, at Carson-Newman in a game they played without the post presence of the 5-foot-11 Rogers. A Catawba win would’ve tied the teams in the standings.

After an even first quarter, Carson-Newman dominated the second, shooting 11-for-17, and sprinting to a 47-35 halftime lead. Sophomore Mika Wester had 17 points by halftime for the Eagles.

“Morgan Franklin stopped Wester in the second half,” Catawba coach Angie Morton said. “And we did a great job of fighting back.”

Catawba smashed Carson-Newman, 26-10, in the third quarter, by attacking, getting second shots,x and getting to the foul line. Catawba was 13-for-16 on free throws in that period.

Heading to the fourth quarter, Catawba led 61-57. A bucket by Marshauna Butler put Catawba up six at the outset of the period, but then Carson-Newman battled back, got even, and  inched ahead.

“We were turning it over, just a lot of  bad passes by experienced players,” Morton said. “And their guards were driving it right to the rim, and we wouldn’t slide over to take a  charge.”

With 3:38 left, and with the Indians down one point, Morton called a timeout.

Serena Brown, Catawba’s point guard, had a good day, but she missed a 3-pointer on Catawba’s possession following the timeout.

“We’d made a 3-pointer in 150 straight games, but we were in danger of not making one today,” Mincey said. “But that’s why you keep a senior in the game even she’s not having a great day. That was a huge possession, and she made the key shot.”

Rogers got the Indians back within two with a layup. Carson-Newman turned it over, but Rogers’ spinning shot in the lane rimmed out. Then it got wild, with the teams trading hasty turnovers.

With 1:04 remaining, Brooks restored order, casually flipping in a left-handed drive for a 75-71 lead.

A jumper by Brown with 23 seconds left pulled the Indians within 76-73, but clutch free throws by Katie Stubblefield and Wester sealed victory for the Eagles (15-7, 12-4 SAC).

It was the third straight frustrating loss for the Indians, who got 18 points from Brown and 15 points and nine rebounds from Butler. Bri Johnson scored 41 in the game at Carson-Newman, so she was the focus of the Eagles’ defense. She was held to 13.

“It’s very hard to take away Johnson and their post people, and Catawba hurt us inside,” Mincey said. “But I’m proud we were able to get out of here with a victory.”

It was only Catawba’s second home loss. The other was to powerhouse Virginia Union.

“Our problems were defense and not boxing out,” Rogers said. “But we can’t look back. We’ve got to look forward.”