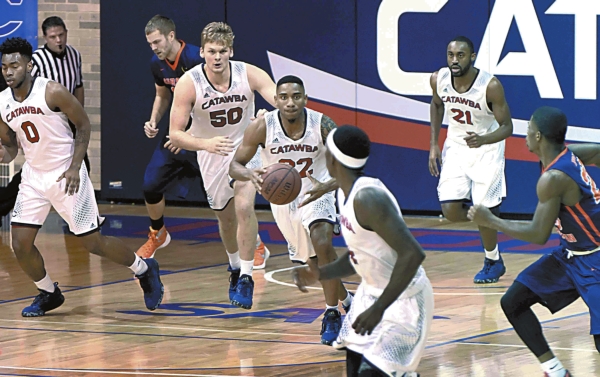 That’s how long it had been since a Catawba men’s basketball team had won six games in a row. No. 6 came in Saturday’s bruising, 77-76, home win against Carson-Newman.

Senior guard Rakeen “Rock” Brown made the decisive shot for the Indians, turning agony into ecstasy with his clutch jumper from a half-step inside the 3-point arc. Brown stoically fired from right of the key with eight seconds remaining.

“Big Shot Rock,” said Arrington with a grin. “He’s like Robert Horry (“Big Shot Bob”) was in the NBA. There’s ice in his veins.”

Indeed, Brown has done it before. Coach Rob Perron said this was the third game-winner Brown has made for the Indians. He’s not a prolific scorer, but Brown has that special quality of staying poised when all heck is breaking loose around him. Even on a team with Jameel Taylor, Jerrin Morrison and Arrington, a trio of  1,000-point scorers, the Indians always are fine with Brown taking the last shot.

Down by a point, Catawba ran its motion offense after a timeout with 20 seconds left. The plan was simple — drive, kick, hit the glass. Taylor bounced his way into the lane and drew multiple defenders. Then he made the kick-out pass to Brown.

“We wanted every dribble we took today to have a purpose and I had eye contact with Rock all the way,” Taylor said. “He was sliding over into an open spot. I knew he’d make the shot.”

There was no time to rejoice, as Carson-Newman tried to retaliate. Charles Clark, one of the SAC’s top scorers, was immediately barreling down the floor, with Taylor desperately sprinting back on defense.

“Clark was my man,” Taylor said. “At first, I was trying to find him, then all of a sudden here he comes, flying straight at me.”

Taylor had memorized the scouting report backwards and forwards. When Clark, a southpaw, goes  to his left, he pulls up for a jumper. But when he goes with his right hand, he’s headed for the rim. Clark was pounding the dribble with his right hand.

Taylor met Clark on the right side of the rim for the game-saving shot-block with 2.3 seconds on the clock. The ball careened of bounds. Carson-Newman coaches screamed for a foul. Those pleas went unheard.

“I was yelling for help, and Jerrin Morrison helped me make a wall at the rim,” Taylor said. “This was a team win all the way.”

Catawba still had to play defense for 2.3 seconds. The Eagles tried to get the ball to 6-foot-8 Sawyer Williams, a man with a thousand post moves. But Catawba’s Troy Warren didn’t let him catch the ball cleanly in the post. Williams caught it off-balance, falling away from the hoop, and could only fling the ball toward the rim. The shot sailed wide right, and Arrington cheerfully batted it off the backboard.

“Smacked it as hard as I could, so the time  would run out,” Arrington said.

Catawba got 22 points from Arrington, 19 from Taylor, 15 from Morrison and 11 from Brown. The Indians  won even with Malik Constantine and Andrew Ingram sidelined.

After an even first half, Catawba enjoyed a terrific run fueled by the torrid shooting of Brown and Taylor to take a 13-point lead with eight minutes left.

“They played us zone, and they should have played us zone because we shot terrible at their place,” Taylor said. “But we got a few 3s  to fall today. It was about time.”

“We only had 11 turnovers, but a lot of them were in that one stretch,” Perron said. “And Carson-Newman is so efficient on offense.”

With Catawba (15-6, 10-6 SAC) trailing 75-74 with 35 seconds left, Morrison missed on a baseline jumper, but Arrington knifed in for the acrobatic stick-back.

“I tried to attack the boards from a lot of different angles,” Arrington said.

Arrington made a steal right after that, but disaster loomed for the  Indians when Arrington missed a one-and-one free throw with 21 seconds left and Morrison was whistled for coming over the back of Clark when he tried to soar in for the rebound.

Clark made his free throws to put Carson-Newman ahead, 76-75.

But then it was Brown’s time. Once again, he was “Big Shot Rock.”

Arrington and Taylor accounted for nine rebounds each, while Warren had eight. Morrison crushed a mind-boggling, down-the-lane dunk in the first half.

Catawba avenged a 78-71 loss at Carson-Newman. The teams are tied for fourth place.