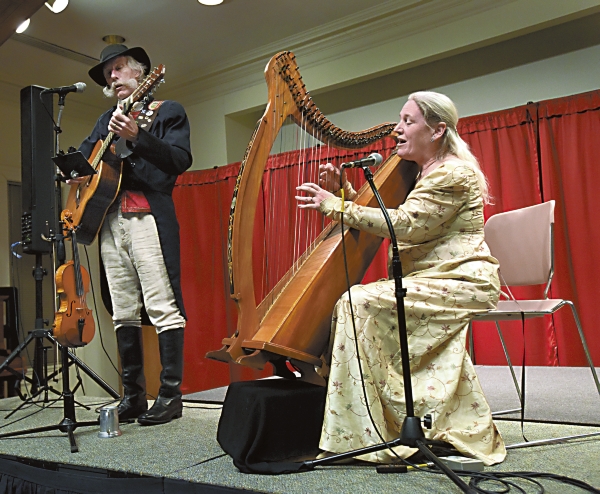 The Castlebay singers, Fred Gosbee and Julia Lane, perform during the show "Robert Burns: The Man, the Myth and the Music' at Rowan Public Library. Photo by Wayne HInshaw, for the Salisbury Post

The musical duo Castlebay returned to Salisbury this week for an evening of Celtic music and poetry.

The Friends of the Rowan Public Library and the Cheerwine Concert Series sponsored the concert at the library.

For their second appearance in Salisbury, Julie Lane and Fred Gosbee — the duo known as Castlebay — took the audience on “a musical journey through time and across the Atlantic blending history, legend and experience. The show, titled “Robert Burns: The Man, the Myth and the Music,” is on a six-week tour that will take the performers from their coastal home in Maine along the East Coast to Florida and back again.

They performed the songs of Burns and recited some of his poetry, filling in the gaps with stories about the colorful womanizer and writer of 18th-century Scottish poetry and songs.

Lane portrayed Burns as a poor tenant farmer who wrote poems and songs to relieve his misery. In his short life of 37 years, he rewrote many Scottish folk songs and is considered the national poet of Scotland.

Folk singer and Nobel Prize winner Bob Dylan credits Burns as the most influential poet in his own poetry and songs.

Lane described Burns as a “man who really liked women.” She said Burns once said that God created man first and didn’t get it right, so he created woman and got it perfect. Burns liked women so much he sometimes carried on affairs with two or more at the same time, she said.  He had numerous affairs and several illegitimate children.

Burns’ first book of poetry was “Poems, Chiefly in the Scottish Dialect.” He later published “The Scots Musical Museum,” a collection of Scottish music.

Much of the music performed in the show was researched at the Scots Musical Museum.  Many of the folk songs were sung in Scottish while others were sung in English. Lane explained the meaning of words in the Scottish language songs.

Lane is a soprano who plays the Celtic harp. Gosbee is a baritone and plays guitar and fiddle.

Lane’s Celtic harp was made by Gosbee with an artwork inlay. “The harp is a manual harp in that all the sound adjustments had to be my hand,” she said.

When asked from the audience about the different colors of harp strings — red, blue and white — she explained that the colors are like a road map for the changing sounds.

Gosbee was dressed as Burns might have been in the 18th century. He said there is only one known painting of Burns, and that’s where he got the idea for his outfit.

The final number in the show was “Auld Lang Syne,” written by Burns in 1788. The tune, known for being sung on New Year’s Eve, is Burns’ original tune that was changed in the 1800s to what we know today.

Shadow of the future: Students celebrate Groundhog Day with…