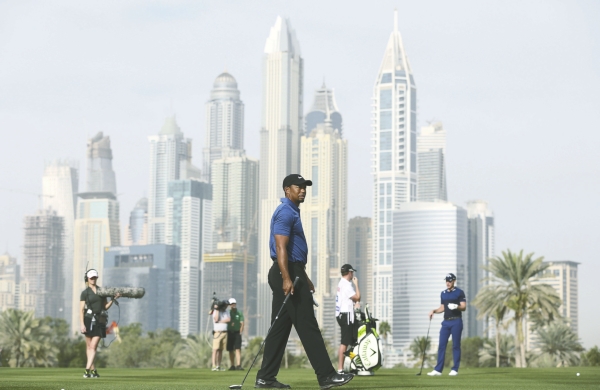 DUBAI, United Arab Emirates (AP) — Missing fairways, missing greens and piling up the putts, Tiger Woods got off to a rough start at the Dubai Desert Classic on Thursday.

The 14-time major winner finished the first round at 5-over-par 77, failing to record even one birdie at Emirates Golf Club.

“I left probably about 16 putts short. I just couldn’t get the speed of these things,” said Woods, a two-time champion.

He would finish in a tie for 121st, 12 shots behind first-round leader Sergio Garcia (65).

Woods started on the 10th hole and hit only 10 fairways and 11 greens in regulation. He needed 33 putts to complete his round.

“I just could not hit the putts hard enough. I left every putt short,” Woods said. “What I thought was downgrain, downwind, would be quick, downhill, and I still came up short. Into the wind, uphill putts into the grain, I put a little more hinge on it going back to try to get a little more hit to it, and it still didn’t work.”

Strong wind was forecast for Friday, making the prospect of picking up some strokes in the second round difficult.

“Hopefully, this wind blows tomorrow and I get back to even par now. That’s certainly not out of the realms,” Woods said. “It’s going to be tough, and hopefully it is tough and I can play a really solid round and give myself more looks.”

In his first event of the year last month at the Farmer Insurance Open, Woods didn’t make the cut.

The back injuries which sidelined him for more than a year didn’t flare up on Thursday.

“I wasn’t in pain at all. I was just trying to hit shots and I wasn’t doing a very good job,” he said. “At the end, I finally hit some good ones but damage had already been done. On top of that, I could have hung in there, I could have shot something near even par if I would have made some putts, but I made nothing.”