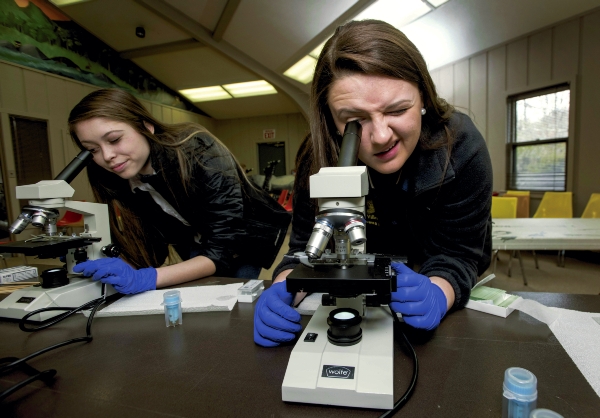 JON C. LAKEY / SALISBURY POST South Rowan High school juniors Brianna Hayes (left) and Elizabeth Villeneuve use microscopes to examine fecal sample for parasites. The pair received first hand experience into the jobs of the staff naturalist at Dan Nicholas Park during a half day job shadowing program. They helped staff gather fecal samples from the bear habitat was able to use those samples to verify the absence of parasites. They also had the opportunity to place large feeder rats in the bobcat habitat. Thursday, February 2, 2017, in Salisbury, N.C.

SALISBURY — Shadow the groundhog was startled by his own shadow Thursday at Dan Nicholas Park. But his shadow wasn’t the only one hanging around the Nature Center. Brianna Hayes and Elizabeth Villeneuve, two South Rowan High School juniors, were also shadowing — job shadowing, that is.

The two stuck close to assistant naturalist Megan Cline as she walked around the back paths of the Nature Center, feeding and taking care of the animals housed there. Both are members of South Rowan’s Future Farmers for America club and are thinking of careers in agriculture.

The opportunity is part of a partnership between the Rowan County Chamber of Commerce and Rowan-Salisbury Schools’ Career and Technical Education Department.

It’s the first time the county has run a Groundhog Job Shadow Day, but chamber President Elaine Spalding said she hopes to make it a new tradition. Spalding called the day a “beautiful partnership” between education and business that gave students a chance to get up close and personal with potential careers.

“We hope this leads all the way up the full spectrum,” she said.

For some students, there were a few surprises in store. Brianna said she had expected to spend the day in something similar to a classroom setting. Instead, she and Elizabeth spent the morning collecting stool samples, hiding rats for a bobcat’s breakfast and checking for signs of parasites.

“I didn’t really expect all this work that goes into taking care of animals,” Brianna said.

Brianna said she wants to be a biotechnician, She always thought she’d be more interested in working with plants but said that she’s considering animals after her morning at the park.

“I think it’s a good opportunity to see what a zookeeper does,” said Megan Cline, assistant naturalist at the park.

On the other end of the county, East Rowan High School student Maggie Cox spent the day shadowing Partners in Learning Executive Director Deborah Howell. For Maggie, something clicked.

“I’m definitely seeing this,” she said of the field.

Maggie wants to become a teacher, but said she has not settled yet on an age group or subject. Maggie tagged along as Howell visited classrooms and conducted observations. And much of the day centered on a conversation about passion.

“You gotta have the passion for whatever it is in order to be successful,” she said.

Howell has had interns before but said she found shadowing to be more beneficial, in some ways. She was able to focus on her work. The sooner students can get a taste for a field and decide if it’s a good fit for them, the better, she said. And if they decide not to pursue a career in education, all’s well that ends well.

Maggie said that throughout the day, she was able to learn which areas of education she thought she would enjoy and which ones she should avoid. But she thinks that the variety and creativity afforded by teaching is definitely for her.

“I don’t want to do the same thing for the rest of my life,” she said.

Howell agreed and said that being a teacher is “a roll of the dice every day.”

While Maggie enjoyed her day as a shadow at Partners in Learning, she said she felt that the opportunity could have been better advertised — a lot of her classmates weren’t aware of the opportunity.

“I think everyone should get to do it,” she said, “but that’s just me.”