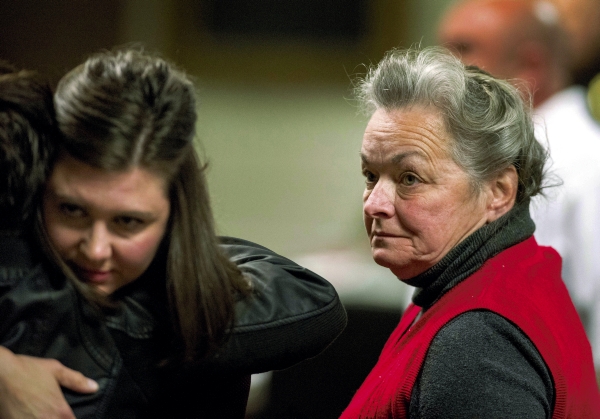 JON C. LAKEY / SALISBURY POST District Attorney Brandy Cook (facing left) hugs Candice Swift during a recess of the court and after the verdicts were read. Sandra Steen (right) watches. The jury in the murder trial of Jeff Steen returned a verdict on Wednesday morning in Rowan County Superior court. After days of deliberations, jurors find Jeff Steen guilty of the 2013 murder of his grandfather, J.D. Furr, guilty of robbery and guilty of attempted murder of his mother, Sandra Steen. Wednesday, February 1, 2017, in Salisbury, N.C.

“Justice for Daddy has been served now.”

— Sandra Steen, survivor, on son Jeff Steen’s conviction for the murder of her father, J.D. Furr,  and her attempted murder

“We look forward to bringing the group to North Carolina — and the amazing schools in Rowan-Salisbury, Charlotte- Mecklenburg and Rock Hill, S.C. — when all of our districts are able to be there.”

“It’s neat to walk through
another world without leaving Salisbury.”

“I think the city actually has to put themselves in the seat of the citizens and look at it from that perspective.”

“We understand that what is good for the local and regional community is good for our business.”

What’s good for the world community is good for us Since World War II, our policy has focused on bringing... read more