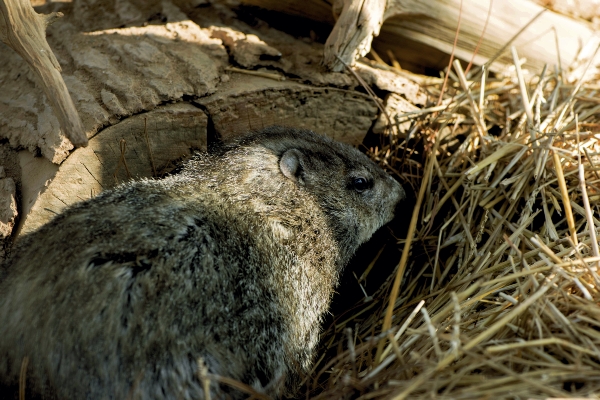 According to folklore, six more weeks of winter come when a groundhog returns to its burrow after seeing its shadow on its namesake holiday. If a groundhog emerges from its burrow on a cloudy day and doesn’t see its shadow, spring supposedly comes early.

The park has two 4-year-old groundhogs. Appropriately enough, one is named Shadow. The other is named Tribble.

About 8 a.m., Shadow made the same prediction as the well-known Punxsutawney Phil for another six weeks of winter. Shadow first emerged for food and later re-emerged for sunbathing. Tribble remained under a large log in his enclosure.

By 10 a.m., Shadow was enjoying sunny bits of a party cloudy day. He sat just outside a large log used as a burrow and soaked in strips of sun. He even posed for a few pictures.

Regardless of whether the animals are perfect meteorologists, assistant naturalist Brooke Wilson said it’s fun to check to see if the park’s groundhogs see their shadow on their namesake holiday.

February is an ideal month for pruning

SALISBURY — What is February known for? No, I am not thinking about the holiday where you get chocolates and... read more