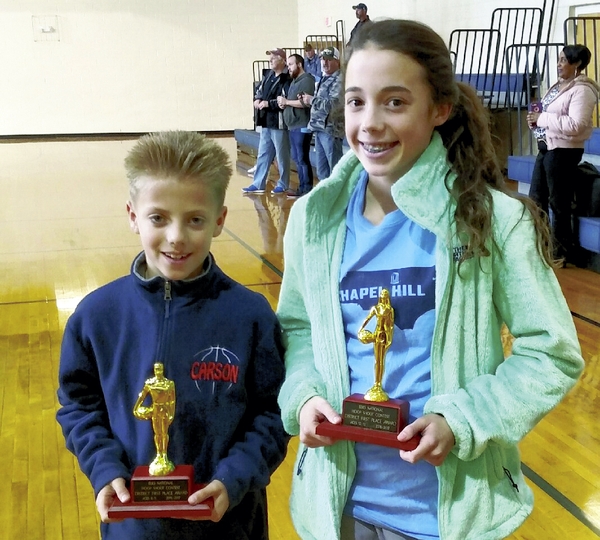 Representing Salisbury Elks Lodge 699, the two advanced to the state competition in Greensboro on Feb. 11.

Perry, who prefers being called “CP,” is a third-grader at Morgan Elementary School. He connected on 23-of-25 free throws to outscore five other contestants. The nine-year old wasn’t surprised he scored a lot of baskets.

“I have a routine that I do before every shot and that helps me stay focused,” said Perry.

Although this is CP’s first free-throw competition, he is no stranger to the basketball court. His dad, Brian Perry, is head coach of the Carson High School boys team and his older sister, Colbie, just finished her eighth-grade season as a standout for Erwin Middle School.

“My dad taught me how to shoot and play basketball,” CP said. “I practice a lot with him now and we set a goal each time to shoot so many and make so many.”

Conrad, whose main sports are tennis and soccer, began playing basketball in the fall of 2015. She was a starter at Southeast Middle School this season under Coach Rob Hales. Conrad credits Hales and her sister, Taylor, a freshman at Carson, for helping her improve her basketball skills.

“I didn’t compete in the hoop shoot contest last year,” said Conrad. “I was really surprised to win the local and district because the competition was so impressive.”

Conrad’s parents knew the competition would be tough. Lindsey’s dad and sister have participated in previous Elks hoop shoot contests.

Both Perry and Conrad would love a trip to Chicago in April to complete in the Elks National Hoop Shoot finals. But they have to get through the state and regionals first.