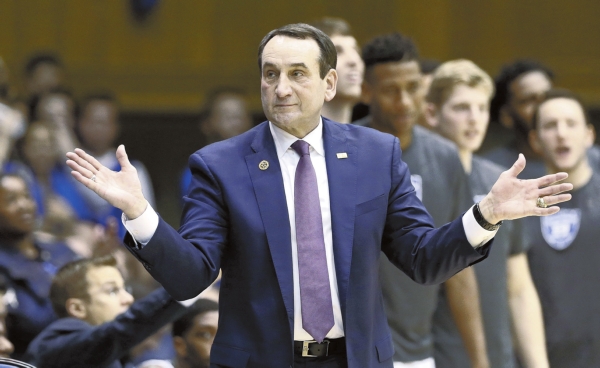 Duke coach Mike Krzyzewski says the Blue Devils still have work to do to get back into game shape. (AP Photo/Gerry Broome, File)

The Hall of Fame coach announced Thursday night on his weekly radio show that he will make his return Saturday against Pittsburgh after back surgery kept him out for four weeks.

His return falls in line with the four-week timeline the school projected when his leave of absence was announced on Jan. 2.

Krzyzewski revealed on the SiriusXM radio show that he’s been attending parts of Duke’s practices for the past week and a half, slipping into the locker room to watch on closed-circuit television when fatigue would set in. He says his assistants would visit his house after every practice to discuss and evaluate what happened on the court.

“Basically, though, I’ve been doing stuff every day, really, with our program,” Krzyzewski said. “Not as much with the physical nature, but with preparation and some of the things that you just have to do in running a big-time program.”

Duke (17-5, 5-4 Atlantic Coast Conference) went 4-3 with associate head coach Jeff Capel running the team in Krzyzewski’s absence. The 21st-ranked Blue Devils won two road games in 48 hours — at Wake Forest and at No. 20 Notre Dame — after losing three of their first five games without the winningest men’s coach in Division I history.

Krzyzewski stepped away from the team to have a fragment of a herniated disk removed from his lower back on Jan. 6, the fifth surgery since the end of last season for the coach who turns 70 on Feb. 13.

The team has been in the hands of Capel, a former Duke guard in the 1990s and a head coach at Virginia Commonwealth and Oklahoma who also led the team for one game last year when Krzyzewski missed a trip to Georgia Tech due to high blood pressure and dehydration.

“Guys are accustomed to hearing his voice, so when he took over as the interim head coach it wasn’t shocking,” Krzyzewski said.

Those wins and losses during the absence go on Krzyzewski’s record.

This extended departure certainly went better for Duke than the last one — when the Blue Devils went 4-15 during the final 19 games of 1994-95, the last time they missed the NCAA Tournament. Krzyzewski left the team that season due to back surgery and exhaustion.

That experience, he said, taught him to stop “micromanaging things and gave everybody a chance to do more, and we got better as a result of it.”

The Blue Devils won their first game this season without him, beating Boston College at home, before losing games on the home courts of Top 25 opponents Florida State and Louisville. They rebounded to beat Miami, then lost to rival North Carolina State — a defeat that seemed to bring a promising season to a crossroads.

Duke then beat the Demon Deacons on a 3-pointer by Luke Kennard in the final seconds, then followed that with a victory at Notre Dame that Capel hailed as evidence the team was “growing up” and “becoming tougher.”

Capel had the authority to shake up the rotation, at times benching Kennard and preseason AP All-America guard Grayson Allen in favor of a lineup that made up for a lack of scoring punch with defensive energy.

Krzyzewski’s departure was the latest bump in an up-and-down season for the Blue Devils, who were picked No. 1 in the preseason but have dealt with early season injuries to three immediate-impact freshmen, a bone bruise in the same foot that high-energy forward Amile Jefferson injured last season and an indefinite suspension to Allen for tripping yet another opponent that turned out to be for one game.

Now, everyone is back — players and coach.