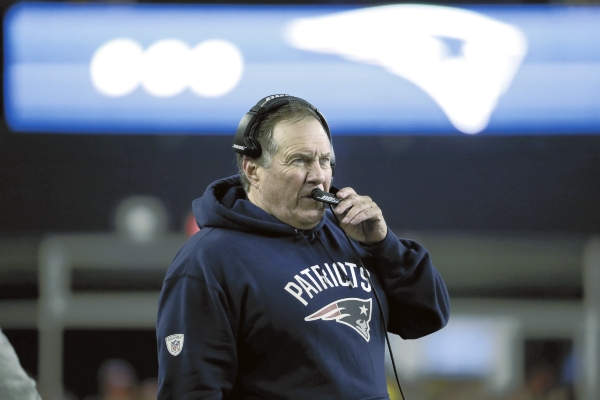 FILE - In this Sunday, Jan. 22, 2017, file photo, New England Patriots head coach Bill Belichick talks on his headset on the sideline during the second half of the AFC championship NFL football game against the Pittsburgh Steelers in Foxborough, Mass. Belichick may seem like one-of-a-kind, and he will set himself apart with a win Sunday in Super Bowl 51, which would make him the first coach to capture five Super Bowl rings. But he has much in common with Tom Landry, Chuck Noll, John Wooden and any other coach to put himself among the Mount Rushmore of the best to ever run a team. (AP Photo/Matt Slocum, File)

HOUSTON (AP) — He values the team’s overall culture ahead of its individual parts.

He rules his team witwh an iron fist, and yet, instills that team with a sense of family.

He can appear heartless — quick to say “goodbye” to those who no longer fit in — and yet, he is deeply loyal.

He has hard-and-fast ideas about how to run his own team, but is never against learning and adding bits of others’ expertise to his own repertoire.

Yes, this is a description of New England coach Bill Belichick, who can set himself apart Sunday by winning a record fifth Super Bowl title as a head coach.

It’s also a description of former coaches Chuck Noll of the Steelers and Tom Landry of the Cowboys and Alabama’s Nick Saban.

As well as Gregg Popovich of the Spurs and former UCLA coach John Wooden and pretty much every other person who has cemented him or herself on the Mount Rushmore of the profession.

“Xs and Os are the price of admission,” says John O’Sullivan, founder of the Changing the Game project , who speaks often about the importance of coaching in society. “But great coaches, the first thing they do is connect. When you connect with people, they’ll run through a wall for you.”

Belichick, a people person? The same might have been said, or asked, about Noll, Landry, Saban or any of these coaches, whose time facing the public usually involves 5- and 10-minute segments with the media during which their main goal is to not reveal anything important about their game plan — or much about themselves.

The effort — and sometimes, accolades — they get from their players says more.

Terry Bradshaw couldn’t stand Noll on their way to winning four Super Bowls with Pittsburgh. Only years later did the Hall of Fame quarterback concede that he benefited from Noll’s coaching. “Did I respect him? Of course I did,” Bradshaw said last year. “Like him? No, I didn’t like him.”

Among the 15 blocks on Wooden’s famed pyramid of success is “self-control,” an attribute that applies to the players as well as the coaches and general managers choosing them.

In a recent talk he gave to a group of coaches, Popovich spoke of the virtually mandatory requirement to resist talented players who are more focused on themselves than the team.

“That’s not easy,” he said. “You have to follow through, be good to your principles. That person who’s going to be good, who has potential, that’s going to get you fired.”

A lot has been made this year of New England’s decision to part ways with two key cogs in its defense — Chandler Jones in the offseason, then linebacker Jamie Collins, who was (ruthlessly?) traded away to winless Cleveland in October. That defense still allowed the fewest points in the league.

Belichick is hardly the first coach faced with those sorts of choices. In the ‘70s, Landry spent a season shuffling between Roger Staubach and Craig Morton at quarterback. Eventually, he recognized the Cowboys could only succeed with one of them, and he chose Staubach, while trading Morton to the Giants.

“Sometimes it is unfortunate to have to make such a decision,” Landry said at the time. “But it is important to clear the air so there is no speculation on it from week to week.”

Tom Thibodeau, coach of the NBA’s Minnesota Timberwolves, spent time with Belichick a few summers ago and said he marvels because “the infrastructure is so strong” — one factor that allows great coaches to say goodbye to key players without missing a beat.

“You either conform and become a team-first guy, or you won’t be there long,” Thibodeau said. “I think every player really wants discipline. And they want to win. So when you give them the environment, they’ll usually respond in a positive way.”

But while the great coaches demand discipline, they also figure out ways to get their teams to bond. Former coach Packers coach Vince Lombardi had a well-earned reputation as a taskmaster, and yet one epiphany that took him over the top was the concept, virtually unheard of at the time, that the word “love” really did belong in a locker room.

More recently, Tom Coughlin overdid discipline for most of his first 10 years in the NFL. Only when he let up a bit, then got Michael Strahan on board, did the Giants become winners.

This year’s other Super Bowl coach, Dan Quinn of the Falcons, has discussed his season-long quest to turn his group of players into a “brotherhood.”

Belichick will never be confused as warm-and-fuzzy, though maybe Vince Wilfork’s tweet after parting with the Patriots in 2014 painted the best picture about the sort of atmosphere the coach has created: “We are always family,” Wilfork wrote.

And while great coaches have some hard-and-fast rules about how they want to run their teams, the best of them are always keeping an open mind toward learning.

Famous are the stories of Belichick’s willingness to go the extra mile — especially in the film room — from the time he got his first NFL job, as an assistant to Colts coach Ted Marchibroda in 1975.

“The impression he made on colleagues was almost universally favorable — open-minded, incredibly hard-working, absolutely committed to being a little better every day … a master at using film,” wrote David Halberstam in his 2005 profile on Belichick, “The Education of a Coach.”

Another great coach took note of that.

Before Nick Saban started winning his five national titles in college, he was Belichick’s defensive coordinator with the Browns from 1991-94.

“I thought I knew something, and really found out that I was really in a position to learn a lot,” Saban said. “That time in Cleveland probably helped me as much as anything in developing the kind of philosophy and organizations that have helped us be successful through the years. I attribute a lot of it to Bill Belichick.”