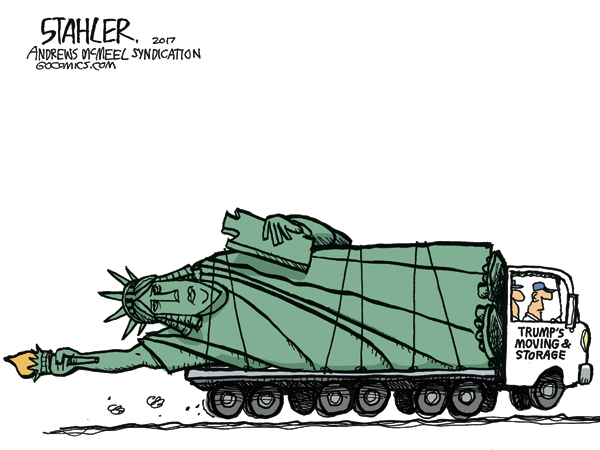 A stain on our history The news coverage of President Trump’s refugee-restricting order focused on abused travelers, angry protesters and aggrieved lawyers. Those reports were useful, but they missed a much larger and more consequential point: Trump’s action was profoundly immoral and un-American. It violated our most basic values and traditions as a nation.

Almost 229 years ago, George Washington wrote to a Dutch minister, the Rev. Francis Adrian Vanderkemp, who had arrived in America after fleeing religious persecution. “I had always hoped,” Washington wrote, “that this land might become a safe and agreeable asylum to the virtuous and persecuted part of mankind, to whatever nation they might belong.”

The 45th president has broken faith with the first. Instead of welcoming the “virtuous and persecuted part of mankind,” he’s rejecting them. Moreover, his policy is counterproductive. Instead of keeping the country more safe from terrorism, it will make us less safe.

Two Republican senators with impeccable military credentials, John McCain and Lindsey Graham, had the courage to tell the truth: “Ultimately, we fear this executive order will become a self-inflicted wound in the fight against terrorism.”

“This executive order sends a signal, intended or not, that America does not want Muslims coming into our country,” wrote the GOP lawmakers. “That is why we fear this executive order may do more to help terrorism recruitment than improve our security.”

Only two groups seem to be cheering: Republicans who are afraid of crossing the new president and jihadists who cannot believe their good fortune.

The president’s order bars all refugees for 120 days, bans refugees from Syria indefinitely, and stops all citizens from seven Muslim-majority countries from entering the U.S. for 90 days. Moreover, it slashes the U.S. quota for refugees from 110,000 a year to 50,000.

In defending the impact of the order, administration spokesman Sean Spicer used a flurry of “alternative facts.” Only 109 refugees were directly affected this weekend, he said, comparing their trauma to waiting in line for “a couple of hours” at a TSA checkpoint.

In fact, the impact is far larger. Families were torn apart. Countless institutions — corporations, universities, hospitals — were thrown into turmoil. Spicer said the price was necessary to protect the country from terrorist threats, but evidence does not back him up.

Refugees are already subjected to extraordinary background checks that can take up to two years. Most of them are women and children. U.S.-born jihadists are a far greater threat than outsiders trying to infiltrate the country.

The libertarian Cato Institute estimates the odds of an American being killed by a refugee-turned-terrorist are 1 in 3.64 billion. Charles Kurzman, a terrorism expert at the University of North Carolina, told the Times the danger of such an attack is “infinitesimal.”

If the benefit of the president’s policy is “infinitesimal,” the cost is almost infinite. Terrorism is certainly a real threat, but any effective effort to combat that threat starts with the cooperation of Muslims who could be alienated by the administration’s hostility.

Former CIA director Michael V. Hayden told The Washington Post that “there is no question this has already created an irretrievable cost.” The refugee order “has taken draconian measures against a threat that was hyped. … It feeds the Islamic militant narrative and makes it harder for our allies to side with us.”

Trump says he wants “to wipe ISIS from the face of the earth,” but that can only be done with Muslim troops, not Americans. Daniel Benjamin, formerly the State Department’s top terrorism expert, told the Times: “For the life of me, I don’t see why we would want to alienate the Iraqis when they are the ground force against ISIS.”

The moral cost is as high as the military one. As a nation, we have failed Washington’s hope many times before: when Irish Catholics were despised and Italians lynched; when Chinese immigrants were barred by Congress; when loyal Japanese-Americans were interned during World War II; and when Jewish refugees from the Holocaust were turned away.

We now recognize those moments as shameful stains on our history. This episode will be covered in shame, as well.