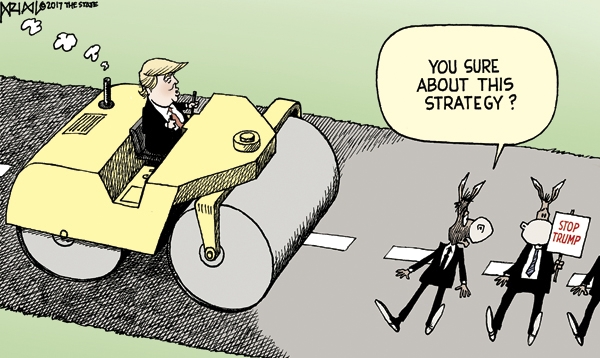 … Letter: Trump steamrolling over liberals   to save America

Bless your heart, Randy. I hope you can get some help soon. Sad.

It is not only liberals hit by the Trump steamroller, but also the Constitution and the free press. Sen. Tillis warned about the steamroller when he said that Republicans were not given a mandate to ram through a “far-right, ideologically driven agenda.”

Mr. Biggerstaff, we’re all hearing the same old stuff about the “shameless, dishonest, news media,” but surely you’ve noticed you are only talking about media who don’t support Trump blindly. I’m assuming you want government run media who only praise and glorify Trump and his actions — like they have in North Korea and Russia with their leaders? When I watch pictures of North Koreans marching and adoring their leader, I always wonder what they really think and feel.

At least so far in America, we can hear differing opinions, and there used to be respect for each other, but I forgot, that was political correctness, and from your letter which shows only contempt and disdain for those who don’t agree with you, I assume you never learned that was just kindness and understanding. Please be careful what you wish for, because I believe your favored leader wants the same kind of media that you seem to want.

The perpetrator of the attack in Nice was a French resident from Tunisia, as were all but one of his accomplices, an Albanian. Tunisia is not included in President Trump’s order.

As far as vetting possible terrorists, what does a “possible terrorist” look like? We know what most of the people look like who have committed terrorist acts in the U.S. over the last few years. Dylan Roof is pretty typical. And he is neither from the Middle East, nor a refugee.

None of the Middle Eastern countries that Trump does business are on the list.

Bad hyperbole, illogical and false statements, lack of clarity. Look what Fox News has done to you!

Thank you for excusing us of any responsibility for the melting glaciers, shrinking ice cap, rising sea level, acidified oceans, erratic weather patterns, 1,000-year floods, extended droughts, deforestation and the greatest mass extinction of species since a meteor wiped away the dinosaurs.

Thank you for setting Al Gore and Leonard DiCaprio straight. Perhaps now that you’ve thoroughly enlightened us all about the global warming hoax, you can direct your attention and expertise to the biological evolution hoax, gravity hoax, plate tectonic hoax and round Earth hoax. Don’t forget the cancer-causing cigarette hoax. I shall await the results of your conclusions on these matters with bated breath.

… Community reacts to city’s request for opinion on warrants

The City Council can not suspend N.C. General Statute 15A-251, which allows for a no-announcement forced entry to execute a search warrant if there is probable cause to believe that giving an announcement of identity and purpose would endanger life.

An officer does not need a judicial official (magistrate or above) to give prior authorization for a no-announcement entry. The probable cause can be assembled mere seconds before entry.

The City Council could strong-arm the police chief to create a departmental general order prohibiting it, even though it is authorized by state law. An officer(s) could be terminated if they utilized the no-announcement statute, but the officer would not be violating N.C. state law in doing so.

I would like to commend the attorneys involved in these cases: District Attorney Brandy Cook and capable Assistant DA Tim Gould for the prosecution of the cases, and Darrin Jordan for putting up a diligent defense for the accused.

A case like this takes an extraordinary amount of time, and we are blessed in Rowan County to have such outstanding professionals on both sides of the courtroom.

… Salisbury a scenic and inspiring setting for conference

Salisbury is a beautiful town, deserving the pride and affection of residents. The signs reminding folks to “Keep America Clean and Green” impressed me as a young person, signs to remind folks that littering can result in a fine.

It is disturbing to see the litter on Jake Alexander Boulevard, for example. Not only fast food trash, but also bags of household garbage. I believe that signs could help educate and change disgusting habit. It could engage people to remember that Salisbury is their home, too.

Walk through our neighborhoods and schools and you’ll see the feel the hurting of our citizens. Bottom line, Hood, this state added more jobs that are low-paying, low-benefit and without health insurance. Citizens are working longer and harder for less pay and often going without the basic necessities.

North Carolina has become a medieval serfdom where citizens are bound to their feudal masters who feast while the serfs/peasants toil for bread crumbs. Take your U2’s and other statistics and read them to those who support your organization!

The animals could not be in better hands. Excellent veterinarian and tremendous compassion for all animals.

With heartfelt thanks to Nancy and Bill Stanback, Gerry Hurley, Susan and Edward Norvell, Elizabeth and Owen Norvell, Rowan Animal Clinic and the Rowan County Board of Commissioners.

At best, support for these misguided policies reflects cowering fearfulness that defies the realities of the risks we face. At worst, they do know better and are cowering, like Paul Ryan and Mitch McConnell, before Trump in order to not upset the momentum toward realization of their Ayn Rand dystopia they have so longed for.

Atlas Shrugged, will we?

No surprise here. We little people just follow the Republican way, no matter how misguided.

One of the most knowledgeable education people I ever knew said don’t remind students they should not write on the bathroom walls because a lot of them would have never thought about it before. We have just reminded people of many countries that they have not attacked us — yet.

Amazing that Moody “had no idea how big the issue was.” Did she not read about all the groups thus far that have canceled conventions, playoffs etc.?

Another example of this law hurting our state. Please repeal this law.

A “political issue”? HB2 is symbolic of deeper prejudices and hatred towards part of our citizens.

I find it interesting that Chairman Wagner is pushing for all board members to list their party affiliations during elections when he wrote this: “A political issue should not be used to hold a school system hostage.”

It is clear in my mind that politics and party affiliations hurt schools.

Fear of other Americans has its costs. #HB2 is pure bigotry.

Up next: Spring Market in High Point.

The opportunity to showcase our school system’s innovations to a national audience is priceless. Sorry, was priceless.

So now we have a public school-related organization resorting to ostracizing, bullying tactics because they want teens to be able to choose which sex bathroom they want to use? Picture that brilliant scenario.

While concurrently refusing to accept the scientific proof that gender disorder is mental, not physical. Therefore, they are refusing to acknowledge and are denying appropriate help for any such students claiming such a problem. Gee. How beneficial for all! And people wonder why increasing numbers of parents refuse to submit their children to such atrocities during their developing years. Just look at the leadership involved in public education any more.

Plus, 2016 was a banner year for tourism, and not only in this county. So, oops, put a lid on the supposed economic detriment of acting to protect children. As if anyone with brains and a conscience ever would.

How many of these refugees are you going to take in your home or (church) without being vetted?

Mildred, all refugees entering the United States undergo a two- to three-year vetting process before being admitted to our shores. The State Department, FBI, CIA, Homeland Security and many other federal agencies examine each person seeking refuge with extreme care.

The overwhelming majority of those seeking asylum from the countries Trump has identified as supporting terrorists are women and children fleeing persecution and death. They are Christian, Muslim and of many faiths. Therefore, do not be surprised if Jennifer Copeland accepts all refugees seeking her help.

I realize that it is the norm now to accuse the president of most anything, but to say “By continuing to belittle women, you contribute to women experiencing sexual assault at rate greater than the current one in five,” should make even the most liberal say, “What?”

And to say that he is insulting African-Americans seems perplexing to me. He has sought advice and council from many in the African-American community, and one of his first cabinet picks was Dr. Ben Carson — and all of us cheered! He has also invited and sought ideas from others, including Martin Luther King III. Your column conveys bitterness whether you intended it to or not.

Clean up the books and require voter ID !

How interesting. Democrats were first of names taken off, nons were second and Republicans third. How convenient. Not to mention inactivity (since 2008).

So, how many of those taken off the rolls cast a ballot? Probably none.

… The true, correct story of what happened at Donald Trump’s inauguration

I like it. If we are not allowed to make fun of leaders, or the press is afraid, then we are in deep doo doo.