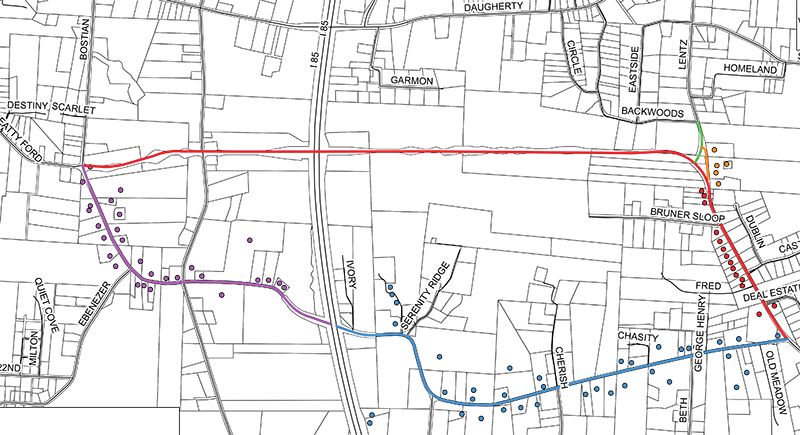 A new I-85 interchange will change Old Beatty Ford Road dramatically. This 2017 map of the affected area show a the red line indicates a street that will become Old Beatty Ford Road. The purple line represents a street that will become an extension of Bostian Road. Freewill Road is name being considered for the street shown in blue. The green line will remain Lentz Road. The small, orange line represents a street without a definite name yet. Each dot is an address that will change.

SALISBURY — When road construction on improvements to Interstate 85 concludes, residents of Old Beatty Ford Road may find they’ve been assigned a new address.

Several dozen addresses in southern Rowan County are scheduled to change as a result of the relocation of Old Beatty Ford Road near a proposed I-85 exit, according to county Planning Department staff.

Staff from the N.C. Department of Transportation, Rowan County Planning Department and China Grove Post Office as well as first responders talked about the name changes during a December meeting. The County Commissioners will weigh in on the name changes Monday.

“Road names that are similar in sound or exact duplicates, especially in the same vicinity, can cause some confusion for first responders,” Thomason said.

Rowan County Communications Director Allen Cress said it’s best to use distinct names to prevent first responders from going to the wrong address. Distinct road names are especially helpful with the prevalent use of cellphones, the device of choice for most 911 calls these days, Cress said. Words such as “new” or “old” can become distorted with a bad cellphone connection, he said.

A total of 14 houses on Lentz Road will have their addresses changed to Old Beatty Ford Road, said Aaron Poplin, a county planning technician.

Poplin said the county’s plans include extending Bostian Road onto a section of Old Beatty Ford Road east of I-85. The extended section of Bostian Road will become a dead end at I-85. A bridge at that site will be demolished.

County plans show 28 addresses must change to Bostian Road as a result of the construction.

On the east side of I-85, from Lentz Road to the current bridge, Poplin said a road name hasn’t been chosen. Freewill Road is one name that has been floated, he said. Staff at Rowan Communications said county commissioners would have the final say in road names.

On Monday, commissioners will hear a presentation about the new road names. No public hearing is scheduled specifically on the road construction Monday, but general public comment is allowed at the start of every commissioners meeting.

Monday’s meeting will be at 3 p.m. in the county administration building, 130 West Innes St.

A small side road will be created as a result of construction. Its name will be decided by residents of the five affected houses, Poplin said.

It’s unclear when the address changes might become official. The I-85 widening work and interstate exit construction are scheduled to wrap up in 2019.