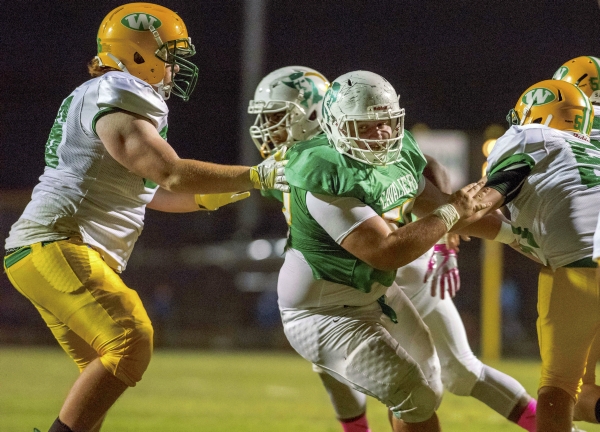 SPENCER — The job description for the nose guard is to occupy blockers and free the linebackers to make tackles, but North Rowan senior Steven Thurston usually went above and beyond the call.

“Thirsty Thurston on the tackle,” was a familiar refrain by North’s P.A. man the last three years.

As a senior, there were a dozen tackles for the 5-foot-10, 270-pound human roadblock against Statesville — and 12 more against East Davidson,. There were 13 stops against West Davidson. Against Davie County, a team that reached the third round of the 4A playoffs, Thurston was in on 15 tackles.

Thurston, a first team All-Rowan County player as a senior, after making second team as a junior, is headed to Averett University. He was honored with a signing celebration at North  on Wednesday. It was well-attended  because he has  a lot of fans and friends. Head coach Ben Hampton sang Thurston’s praises for a while, and then defensive coordinator Josh Sophia praised him even longer and even louder.

“You look at him, and he doesn’t look like a great athlete, but he is,” Sophia said. “Football, baseball, basketball, wrestling, golf — he could play anything. And he loves football more than any kid I’ve ever seen. Every kid loves to play the games, but Thurston even loves practice. He  lives for practice.”

Thurston goes so hard in practice that  he gave Hampton some anxious moments.

“We had one of the best defenses in the state, and our offense went out there every day knowing they probably were going to get their butts kicked in practice,” Hampton said. “I was afraid Thurston and Zion DeBose were going to kill (quarterback) Corbin Smith, and if they broke Corbin  we were in trouble. I had to keep reminding them that Corbin was going to be on the the same team as them on Friday.”

Thurston got started in the local youth football league as a center. When a seventh-grade concussion sidelined him for a few weeks, he lost  the snapping job to teammate Taelor Davis and was moved to guard. He was an eighth-grade linebacker. As a freshman jayvee, he became a defensive tackle. The last three seasons, he’s been at nose guard, a position which he was born to play with his thick arms, thick legs and burly chest.

He credits his coaches and his tireless work ethic — he always does the extra stuff — for his improvement over the years.

“He’s been a true leader,” Hampton said. “Always at the front of the pack in every sprint at every practice. He’s one of those kids that works as hard as he can in practice whether anyone’s watching him or not, and then he lays it on the line every Friday. I can’t say enough about the respect that I have for the effort he gave us.”

Besides being one of the ringleaders of a terrific defense that included three-star defensive end DeBose, Thurston played guard when the offense needed him, and he served as the long snapper.

He was an upbeat, physical guy with a motor that never sputtered.

“He also has  personality,” Sophia said. “He was fun to be around and he pretty much did it all. If you don’t believe me, just ask him.”

Thurston’s lack of height eliminated scholarship offers from big schools, but he still impressed people. Appalachian State and Gardner-Webb wanted him as a preferred walk-on, but Thurston was looking for the opportunity to play early and to play often.

Averett, a Division III school in Danville, Va., just over the border from North Carolina, seems like a good fit for Thurston.

“I sent stuff out to a lot of schools, and Averett’s coach called me,” Thurston said. “They asked me to  come for a visit, and I really loved the place. I didn’t have to think twice about committing.”

Averett has a new football stadium. Cougar fans may not have to wait long to hear “tackle by Thurston” on the P.A.

“He bled green and gold for us, and now I’m sure he’s going to bleed blue and gold for Averett,” Sophia said. “He’s that kind of kid.”