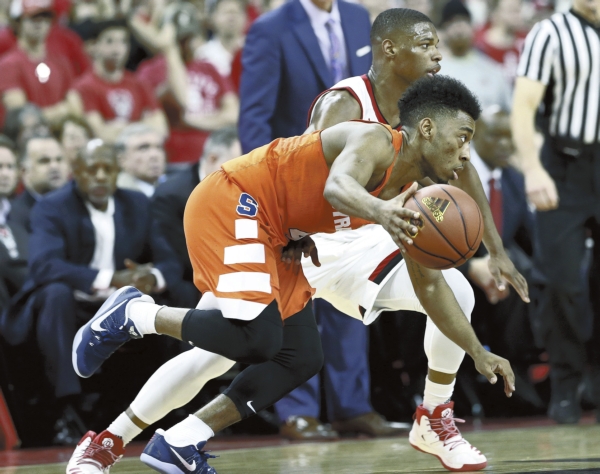 RALEIGH (AP) — John Gillon kept burying 3-pointer after 3-pointer as Syracuse erased North Carolina State’s big lead, his confidence so unshakeable that he at one point walked downcourt with a finger over his mouth to shush a home crowd turning from rowdy to panicked.

“They thought it was over,” Gillon said. “I was just like, ‘We’re not losing this one, so we’re going to keep pushing.”

The graduate transfer from Colorado State finished with a career-high 43 points, helping the Orange rally from 16 down in the second half to beat the Wolfpack 100-93 in overtime for their first Atlantic Coast Conference road win.

Gillon made 10 of 13 shots and 9 of 10 3-pointers, the last a tough one from the left side with 1.8 seconds left to force the extra period — one that had Gillon strutting down the court afterward and shaking his head at the crowd.

He also hit all 14 of his free throws and finished with nine assists in 44 minutes for the Orange (14-9, 6-4), headlining a wild game that saw N.C. State star freshman Dennis Smith Jr. post his second triple-double of the season.

“Yeah, from the start, it felt good,” Gillon said. “I was hitting in warmups, then they let me get a few. They went under the screen, I hit it twice. They left me open in the corner, and I hit that one. So from there, they let me catch my groove.

“I don’t think I can remember one like that,” Syracuse coach Jim Boeheim said of Gillon’s performance. “It was pretty good.”

“That’s probably a shot you’d want to have a guy take against you, to be honest, and he made it,” N.C. State coach Mark Gottfried said. “He was out of this world today. He played amazing.”

Rowan finished with a career-high 31 points for the Wolfpack, while Smith had 13 points, 11 rebounds and 15 assists. The ACC said Smith is the first player in league history to post two triple-doubles in the same season in conference play and fourth to have two in one season overall. No player has ever had three.

Syracuse: Syracuse picked a heck of a way to earn its first ACC road win after coming in at 0-4. The Orange trailed 75-59 with 8:44 left in regulation, but a flurry of 3 from Gillon and Tyler Lydon quickly got them back in it — a sign of what the Orange can do when they’re clicking. The Orange made 15 of 26 behind the arc and shot 56 percent (32 of 57).

N.C. State: It was another bad loss in a season quickly getting away from them, and it came on the heels of a 25-point weekend loss at Louisville.

“We’re not in panic mode,” junior Abdul-Malik Abu said. “We still believe in ourselves.”

Gillon got so hot in this one that Syracuse basically shrugged off running set plays and instead operated off ballscreens or in transition. White said the way N.C. State defended those screens kept giving Gillon open space to launch shots.

“The hedge was kind of soft and his man was going under the screen,” White said. “So you know, in ACC basketball, that’s easy pickings. He took advantage of that. … But I was surprised to watch them keep going under his screens, especially after he’s hitting 3 after 3.”

Syracuse: The Orange host No. 9 Virginia on Saturday.

N.C. State: N.C. State hosts Miami — which beat the Wolfpack by 18 in the first meeting — on Saturday.