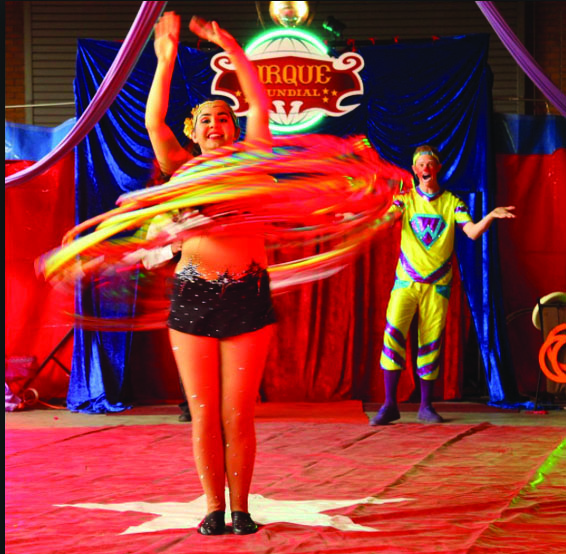 Saturday-Sunday, Feb. 4-5: Family-friendly extravaganza at the fairgrounds’ new indoor facility. The fifth generation of first class performers provides an exciting fun-filled show filled with clowns, acrobats, trapeze artists and other amazing talent from around the world.

CONCORD — Bridget and her grandmother are about to become roommates. However, what Bridget saw as a unique opportunity to stay with her favorite Nana in New York for the summer quickly turns into an experience she’ll never forget. It seems her sweet Grandma is running an illegal boutique from her apartment, selling hand-made naughty knickers to every senior citizen in the five borough area!

Will Bridget be able to handle all the excitement? Will her Nana get arrested — or worse — evicted?

Old Courthouse Theater is located at 49 Spring St. NW. Find out more at www.oldcourthousetheatre.org or 704-788-2405.

Coming up next, Feb. 11-May 20, is “A Sense of Place,” featuring Harriet Hoover’s Family Fruit, sculptures, drawings, and performance; also

‘Race in America: Where Do We Go From Here?’

The Catawba College community forum for February is “Race in America: Where Do We Go From Here?”

Two programs will be held on campus on Thursday, Feb. 9. The first program, at 11 a.m. in Omwake-Dearborn Chapel, will commemorate the 75th anniversary of the visit of First Lady Eleanor Roosevelt to Salisbury and Kannapolis. Catawba College historian and professor of history Dr. Gary Freeze is a coordinator of the event.

Salisbury will be hosting Nina Roosevelt Gibson, Eleanor Roosevelt’s granddaughter. Mrs. Gibson will be visiting the same places that were part of the 1942 visit and will be the principal speaker at the chapel forum that Thursday morning. Joining Gibson will be the person responsible for the overall program of the two days, the Rev. Vincent Huntley of Davidson, who has been active in the promotion of funding for area youth education and community action.

Joining Gibson and Huntley will be Shannon Sullivan, a philosophy professor at the UNC-Charlotte. Sullivan will also be the principal speaker for the main Community Forum event, also slated in Omwake-Dearborn Chapel, at 7:30 p.m. Thursday, Feb. 9.

KHA: An evening with Wally Safrit

KANNAPOLIS — K-Town’s very own Wally Safrit will present the Kannapolis History Associates February program on Camp Elliott on Feb. 6 at 7 p.m. Camp Elliott was founded by the YMCA and later purchased by Mr. Charles A. Cannon. Boys and girls of all ages enjoyed summers at one of North Carolina’s best kept secrets. Held in the A. L. Brown High School social room, 415 East First St. Park in lot East of Trinity Methodist Church. Info: Phil Goodman, 704-796-0803.

Epperson to speak on Readers Theatre

At the February AAUW Lecture Series, Dr. Jim Epperson, Catawba College professor emeritus of theatre arts, will spak on on Readers Theatre and the process that is used to determine what readings make good performance pieces. The lecture is at 6:30 p.m. Thursday, Feb. 9, in the fellowship hall of First United Church of Christ, 207 W. Horah St. Dr. Epperson is the director of the Phoenix Readers, a volunteer readers theatre company of men and women aged 55 and older.

Afterward, a group of the Readers will perform some of their recent and upcoming pieces.

Free. Sponsored by American Association of University Women. Use the ground entrance at the rear of the church. To learn more, contact president Dr. Carol Cody, codycarol@bellsouth.net or visit http://salisbury-nc.aauw.net

DENVER —Kicking off their 10th anniversary season, the Salisbury Swing Band will be the featured entertainment again this year at the 2017 Valentine’s Dinner & Dance in Denver on Saturday, Feb. 11.

Sponsored by the Knights of Columbus Council 10389, this annual event features an Italian meal and a night of dancing. The 18-piece Salisbury Swing Band is a live dance band covering an eclectic array of musical genres from the 1930s to present day. Featuring vocalist Laura Millspaugh, the evening’s performance will include swing, jazz, waltzes, beach tunes and latin rhythms.

The event will be held at Holy Spirit Church Parish Activity Center. Doors open at 6 p.m., dinner is served at 6:30 p.m. Tickets are $35 per person and all proceeds benefit local charities.

PPT youth auditions for ‘Tales of a 4th Grade Nothing’

Oh, brother! Sibling mischief and best pal escapades are the problems Peter Hatcher faces in his attempts to deal with his impossible little brother, Fudge. Based on the popular title by perennial favorite Judy Blume, “Tales” is a humorous look at family life and the troubles that can only be caused by a younger sibling.

Performers of all ethnic and racial backgrounds 18 years old and younger are encouraged to audition. Auditions will consist of a cold read from the script. Performance dates are March 30-April 8.

Auditions for “Boeing Boeing” will be held March 26-27 at 7 p.m. at Lee Street theatre.

“Boeing Boeing,” written by Marc Camoletti and translated into English by Beverley Cross, is a classic French farce that boasts the Guinness World Records most performed French play. The play is set in the 1960s and follows Bernard, a handsome bachelor living in Paris, who is simultaneously seeing three different airline stewardesses. Havoc ensues when the three women, each believing they are engaged to Bernard, arrive at the same time. Performance dates are May 185-27. Scripts are available for perusal at Lee Street Theatre, 329 N. Lee St. Visit www.leestreet.org or call 704-310-5507 for more information.

SPENCER — The N.C. Transportation Museum, in cooperation with the Virginia Museum of Transportation, is offering steam powered train excursions this spring. Trips include the traditional full day excursion to Lynchburg, Va., but also something new —two half day excursions, one to Charlotte and another to Greensboro.

It used to be common to ride the rails, powered by a steam locomotive, taking in the sights and sounds of a weekend adventure. The N.C. Transportation Museum is providing this experience in the modern age, with spring excursions pulled by the iconic Class J #611 steam locomotive.

• April 8: Round trip day-trip to Lynchburg, Va. • April 9: Half day trips to Charlotte and Greensboro.

The Salisbury VA Medical Center will host the local level of the 2017 National Veterans Creative Arts Festival on Feb. 11. Local winners will be announced during the show in the Salisbury VA’s Building 6 Social Room. The event begins at 2 p.m., and is open to the public. Veterans enrolled for care in the Salisbury VA Health Care System who would like more information, or are interested in competing, can call Terri Gilbeau at 704-638-9000, ext. 3575; Jenny Taylor, ext. 3065; or Brittany Gerring, ext. 3143, in the Salisbury VA Recreation Therapy office.

The competition includes 51 categories that range from oil painting to paint-by-number kits. In addition, there are 100 categories in the performing arts pertaining to all aspects of music, dance, drama and creative writing. First place winners from the local competition will advance.

CHARLOTTE — This past weekend Queen City Comedy and Acting Out Studio hosted the first ever Comedy Festival in Charlotte. The performances were by 100 percent local comedy talent, including Charlotte’s leading improvisors, actors, magicians, podcasts, and comedians. More than 650 people came out to enjoy the workshops and shows.

On the final night of shows, 21 local funny people competed in a competition to determine exactly who is the funniest person in Charlotte. When the smoke cleared, the clear winner and audience favorite was Brian Briscoe. “Briscoe,” as he’s known to his friends and fans, performs as an improvisor with Charlotte Comedy Theater and Now Are the Foxes, and has been seen doing his stand-up act around Charlotte.

“Laughter is needed now more than ever, and one of our goals for the festival was to shine a spotlight on the fantastic comedy talent that exists in the Charlotte comedy community,” says festival co-founder Cale Evans. “Briscoe is a great example of a multi-talented comic who audiences love to see again and again … and he’s the nicest guy you’ll ever meet.”

Information about future comedy events will be found at www.queencitycomedy.com

CHARLOTTE — The Charlotte Checkers will host a public skate at Bojangles’ Coliseum on Thursday, Feb. 9 from 4-8 p.m. The Checkers’ mascot, Chubby, and the CheckMates will be there from 5:30-7:30 p.m., and the Checkers’ beloved organ player, Greazy Keys, will be performing from 5-8 p.m. Admission is $5 with your own skates and $8 with skate rentals. All proceeds go to the Checkers Charitable Foundation.

Charlotte— Twyla Tharp’s 50th Anniversary Tour comes to Belk Theater Feb. 25, with most seats priced at only $10. Twyla Tharp’s choreography has had a major influence in both the worlds of dance and Broadway. Tharp has received one Tony Award, two Emmy Awards, 19 honorary doctorates, the Vietnam Veterans of America President’s Award, the 2004 National Medal of the Arts, the 2008 Jerome Robbins Prize and a 2008 Kennedy Center Honor.  Check ticket availability at BlumenthalArts.org or 704-372-1000.

Let your voice be heard with ‘Downtown Beats’

Submitted Are you looking for an opportunity to sing your heart out? Would you like to feel more connected to... read more