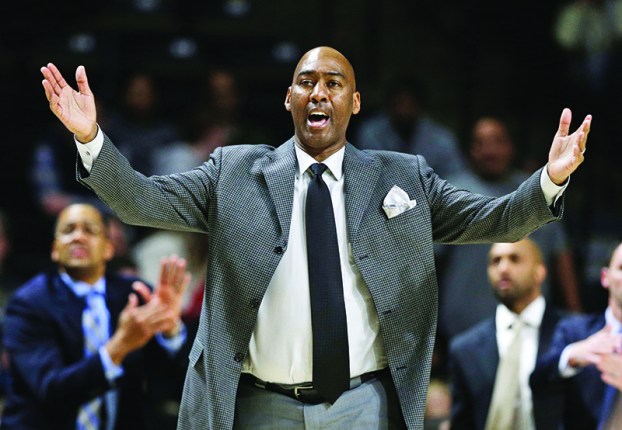 Wake Forest head coach Danny Manning reacts to a call in the second half of an NCAA college basketball against Boston College. (AP Photo/Chuck Burton)

BOSTON (AP) — John Collins knows when coach Danny Manning says something that he’s got the resume to back it up.

The 6-foot-10 forward certainly listened to his advice Tuesday night.

“Yeah, 100 percent locked in because he’s been there,” Collins said. “He knows: ‘Cut off this move, cut off that move.’ He’s seen it. You definitely have to listen and pay attention. I think I followed his advice to a T and got easy buckets instead of trying to make moves.”

Bryant Crawford added 15 points and Austin Arians 14 for the Demon Deacons (13-9, 4-6 ACC). Collins also tied a career-high with 16 rebounds for his ninth double-double of the season.

Jordan Chatman led Boston College (9-14, 2-8) with 22 points. Ky Bowman had 18 and Jerome Robinson 17 for the Eagles, who lost their sixth straight.

Manning, who led Kansas to the NCAA title in his senior year in 1988, said he talked to Collins about being more assertive and getting to the free throw line after halftime.

“We talked about his zero free throw attempts at halftime,” Manning said. “There wasn’t much of a talk.”

Trailing by seven, Wake started pounding the ball inside to Collins, who scored the final 13 points — seven from the free throw line — of a 14-0 run that made it 71-64.

Collins went 8 for 10 from the line in the second half.

He was giving BC so much trouble that center Mo Jeffers and forward Nik Popovic both fouled out.

“We had a stretch of game up seven and we turn it over three straight times,” Christian said. “I’m not using the excuse ‘We’re young.’ We’re not young. They have to as a group be responsible for it. They have to learn how to win a game.”

Wake Forest: The Demon Deacons moved closer to the tight middle of the ACC standings and a possible better position for a matchup in the conference postseason tourney.

Boston College: The Eagles seemed flat in the early minutes of the first half, but overcame that by hitting 10 of their first 20 3-point attempts. For a team that’s struggled and doesn’t have the talent of many of their opponents, it’s not something they can afford to do.

Seven-year old Darla Holloway sang the national anthem, drawing a loud applause from the small crowd. She was diagnosed with acute lymphoblastic leukemia when she was three, but the PA announcer told the crowd she was now cancer-free.

She also sang God Bless America at Boston Red Sox games when she was as young as four.

With light snow falling in the area, and likely combined with the Eagles struggling, there was a very small turnout. But that didn’t explain why the student sections behind both baskets were mostly empty.

Chatman scored 30 points and matched a school-record with nine 3-pointers in a loss at Virginia Tech Sunday.

Wake Forest: At home against Georgia Tech on Saturday. The Demon Deacons play only twice at home in their next five games.

Boston College: The Eagles host No. 6 Louisville Saturday in the second of three straight at home.

An athlete’s dream: Going out on top

By Paul Newberry AP Sports Writer HOUSTON  — Dwight Freeney is coming up on that time of year when he... read more