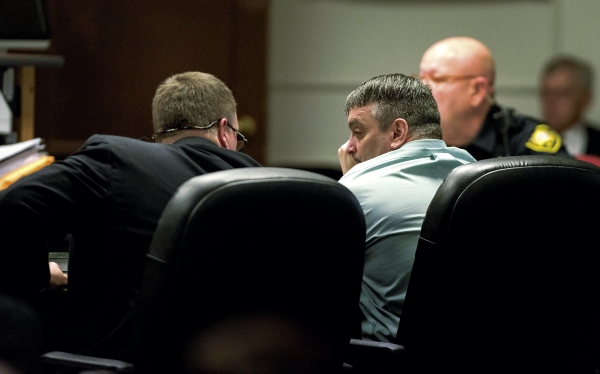 When she picks up her favorite flower, the 65-year-old smells nothing.

These are just two of the lasting effects of nearly being killed on Nov. 5, 2013, she says, at the hands of her only son, Jeff David Steen.

Jeff Steen, 43, was found guilty Wednesday of the attempted murder of his mother, as well as the murder and robbery of his 87-year-old grandfather, J.D. Furr. He was sentenced to life in prison without parole for first-degree murder and 64 months to 89 months for robbery with a dangerous weapon.

The decision came nearly two and a half days after jurors began deliberating. Jurors said early on there were two dissenting votes, but the judge advised them to continue talking.

Just before 11 a.m. Wednesday, jurors made a unanimous decision.

Sandra Steen spoke briefly before the lunch break, saying it was difficult to sit in court for three and a half weeks but that it was the result of her son’s choice.

“Justice for Daddy has been served now. It’s been three and half weeks of reliving Nov. 5 over and over every day, and I’m just real tired and I’m ready to move on now,” she said.

Rowan County investigators said Jeff Steen beat his grandfather with a potato hoe, emptied Furr’s wallet and then attacked his mother using a martial arts choking maneuver and leaving her for dead.

Sandra Steen was in and out of consciousness all night. She tried to crawl back to her house but made it only about 8 feet, according to testimony.

She called out to her father, but investigators said Furr was already dead.

During the trial, witnesses said Jeff Steen stood to inherit his grandfather’s Richfield farm if he and his mother were dead. Jeff Steen owed money to both of them. He was behind on his car payments, his car insurance had lapsed and he owed back taxes, according to testimony.

Sandra Steen said she is glad the trial is over.

When a reporter asked if it is hard to see her son heading to prison, she said that he forgot on Nov. 5 that she was his mother when he tried to kill her.

“We all make choices, and he made a choice that he’s got to live with,” she said.

She said she’s found support from her friends and family, some of whom sat in on the trial with her. Others have prayed for her, she said.

She recalled the health problems she’s dealt with since the attack, but said her health is fairly good. Steen said she still has trouble swallowing because of damaged ligaments in her throat. She said she has balance problems. She was often seen using a cane while in court.

Sandra Steen stood before the judge just before the sentencing and said she is socially isolated. She explained that it was never her intent to sell her father’s farm, but with mounting hospital bills and no way to earn income to pay them, the farm had to be sold.

She sold the land to one of her father’s oldest friends, Ed Listerman, who is also a neighbor. Listerman has allowed Steen to continue living on the farm.

Sandra Steen asked the judge to sentence her son to “a term that will help me feel safe.”

Candice Swift, Jeff Steen’s sister, also spoke to the courtroom, saying she just wanted people to know more about her grandfather and the long-term effects the attacks have had on her family.

She said her grandfather picked cotton at the age of 4, broke tobacco at age 8, and worked doing anything he could to support his family.

Swift said her grandfather loved his children, grandchildren and great-grandchildren so much that he named his cows after them. She recalled fishing at the farm, playing as a child on the farm and other memories.

“This man was not greedy. He was loving,” she said.

Swift said her mother at age 13 helped raise her sisters after their mother left. Sandra Steen worked in the textile mill and often worked two or three jobs, Swift said. She said her mother was in her 40s when she decided to become a nurse because she had always longed to help others.

“My mother can no longer smell, not the scent of perfume, not a pie in the oven, not even flowers that she and grandfather planted,” Swift said.

She said her mother will never walk fast and will always stumble.

“She will never be the person she was before,” Swift said.

Swift described the difficulties her brother’s children have had saying they’ll go to the farm and continue to make memories, but in the back of their minds will be thoughts of their father and the lives he changed.

As Swift spoke of his children, Jeff Steen became visibly upset and cried into his hands. It was the most emotion he had shown throughout the trial.

Candice Swift spoke of the embarrassment and shame the murder and assault had brought on their family.

Cook thanked Rowan County detectives for their hours of investigation in this case.

She said it was fortunate that Sandra Steen survived her life-threatening injuries because she was able to tell investigators what happened.

Jeff Steen gave investigators several stories about how he got the scratches: that he got them at work, that his mother had done it the morning he found her and that he probably got them while working on projects at home or installing a ceiling fan for his grandfather.

He testified that he went to his grandfather’s house on Nov. 5, 2013, to install the fan. He left two times and went back to his Albemarle home to shorten the fan blades and get bolts. His son Jordon had gone with him to the farm twice.

Steen left his grandfather’s home the third and final time without his son. Investigators said it was on that visit that Jeff Steen attacked his grandfather and mother.

Jeff Steen’s attorney, Darrin Jordan, said he understood that by law the judge had to sentence his client to life in prison, but he asked for no other prison time on top of the life sentence. Jordan said his client has a support system of family, some of whom sat in on the trial, including his older sister, Bridgette Steen.

Bridgette Steen said there is more to “this story than what came out.”

“I’m going to support my brother because my mother told me he didn’t do it,” she said.

Bridgette Steen said the court did not get all the facts. She said there was no evidence, including DNA.

Jeff Steen gave notice that he will appeal.

By Shavonne Walker shavonne.walker@salisburypost.com SALISBURY — Jeff Steen will spend the rest of his life in prison after Rowan County... read more