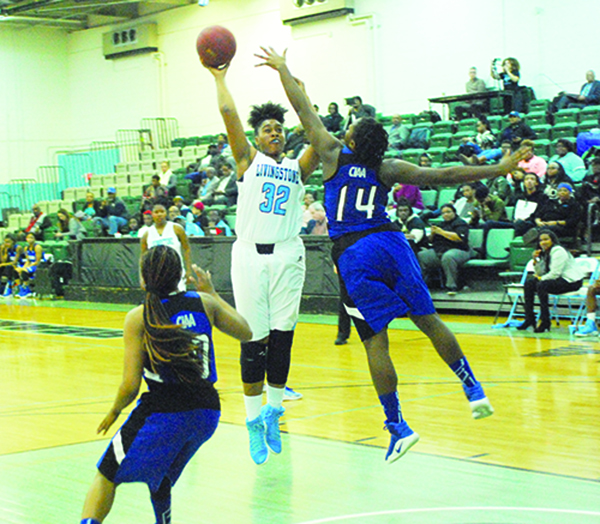 SALISBURY — The Livingstone Eight continue to walk on the sunny side of the street.

Even on a night when the Lady Blue Bears weren’t at their best, they earned their fourth straight CIAA victory Monday at New Trent Gym.

“Everyone faces adversity,” junior Shannon Buchanan said after LC rallied late and surged past visiting Chowan, 90-83, for its fifth win in six games. “We’re just finding ways to make it out.”

Livingstone (12-9, 7-4) made only 21 field goals, shot just 31 percent from the floor and allowed 20 offensive rebounds — all against a team that stunned second-ranked Virginia Union last Saturday, the same day LC needed two overtime periods to win at Winston-Salem State.

“This game was so mental for us,” said first-year coach Tiffany Silver. “We’re tired. We’re banged up. This is what, four games in seven days for us? It was one of those games you have convince your body you’ve got something left in the tank.”

The Blue Bears did just that, but not before falling behind 54-45 midway through the third quarter.

“We were down, but we weren’t gonna quit,” guard Deonna Young said after scoring 21 points despite shooting 3-for-12 from the field. “We’ve come too far. Besides, we put the jerseys on the same way they do.”

Their jerseys were facing the right direction shortly after the fourth period began with Chowan (14-7, 7-4) maintaining a 71-64 lead. “All we had to do,” said Hawks’ coach LaToya Jones, “was stick to what we were doing and not relax.”

Instead, the visitors spent the next four-plus minutes on the frozen food aisle. Chowan didn’t make a basket over a 4:18 span while Livingstone used an 11-2 run to take command of the game. Young hit 3-pointer from the left corner that trimmed the deficit to one and seconds later teammate Zena Lovette (20 points, 10 rebounds) buried a long ball from beyond the left elbow that gave the Blue Bears the lead for good, 75-73 with 5:26 to go.

“It was during a dead ball, I looked at Coach and asked if I could take that shot,” said Young, who came off the bench for the 20th time this winter. “She said, ‘Can you make it?’ I just looked at her and said, ‘You’ll see.'”

Lovette, who shot 6-for-11 from the floor and had four steals, called her 3-ball a momentum-changer.

“I really wasn’t shooting a lot,” she chirped afterward. “But on that one, I just felt like I had it. As long as we’re getting it done, that shot’s OK.”

Silver agreed. “With those girls, at any time you feel like the next one could be it,” she said. “The one that puts us over the top.”

Livingstone’s last basket came with 4:14 on the clock, when Lovette propelled herself across the lane for a hard-earned layup. LC’s final 11 points came from the foul line, including two by Young after making a steal with 17.3 seconds remaining.

“We put them at the line at critical moments,” said Jones. “You can’t have that.”

What Livingstone has now is a team that can’t be ignored.