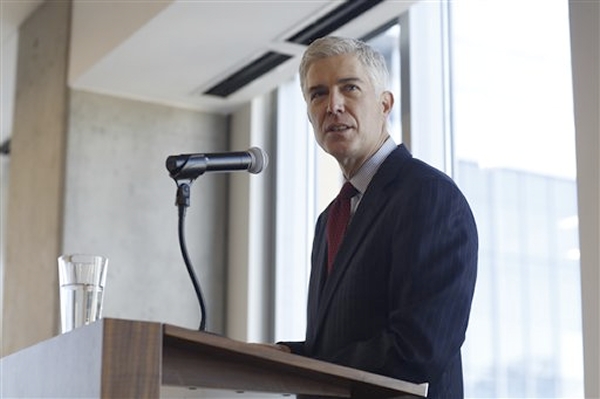 “A Supreme Court nomination isn’t a forum to refight a presidential election,” we wrote in 2006. “The president’s choice is due deference — the same deference that Democratic senators would expect a Republican Senate to accord the well-qualified nominee of a Democratic president.”

We wrote those sentences in preparation for Senate hearings on President George W. Bush’s nomination of then-Judge, now-Justice, Samuel Alito Jr.m and we believe they still apply, even after the past decade of partisan warfare, and even in the context of an impending nomination by President Trump on Tuesday night.

They apply notwithstanding the shabby treatment of President Barack Obama’s last nominee for the court, Judge Merrick Garland, by the Republican Senate leadership last year.

We understand that there are many Democrats, still seething over the GOP’s nakedly partisan refusal to grant Garland so much as a hearing, who regard the seat vacated by the death of Justice Antonin Scalia almost a year ago as “stolen.” Speaking for those Democrats, Sen. Jeff Merkley, Ore., promised Monday that he would call for a filibuster against anyone Trump might pick, in the spirit of “calling out” the GOP’s manipulations, as Merkley’s spokeswoman put it to us. This position goes beyond that of Senate Minority Leader Charles Schumer, N.Y., who has said only that his caucus will “fight tooth and nail” against an “out of the mainstream” Trump nominee.

Emotionally satisfying as Merkley’s approach might be, it would be mistaken. We say this not because it is contrary to the Democrats’ own best interests, though that is probably true, too: Filling the former Scalia seat won’t tip the court’s ideological balance, yet provoking Republicans to resort to the filibuster-abolishing “nuclear option” would leave Democrats disarmed of that weapon against a second Trump pick should another vacancy arise during his presidency.

Our objection is rooted, rather, in our belief that the Supreme Court confirmation process needs to be protected from partisan politics to the greatest extent possible and that a scorched-earth Democratic response to any nominee, regardless of the individual merits, would simply deepen that harmful politicization. Yes, Trump seeks to fill the court’s vacancy to his liking, on the basis of a thin electoral college-only victory. Still, however narrow, his victory was legitimate and he does have the clear constitutional prerogative to make the choice.

Let Trump do so. Then let the Senate expeditiously but thoroughly probe that nominee on his or her legal qualifications, as well as jurisprudence. And then let the Senate vote — yes or no. We advocated that approach consistently for the past five nominees to the Supreme Court, going back to 2005. This group includes two Republican picks — Chief Justice John Roberts and Justice Alito — and three Democratic ones – Justices Sonia Sotomayor and Elena Kagan, and Garland.

It is a formidable list; we hope Trump nominates someone worthy of joining their company.