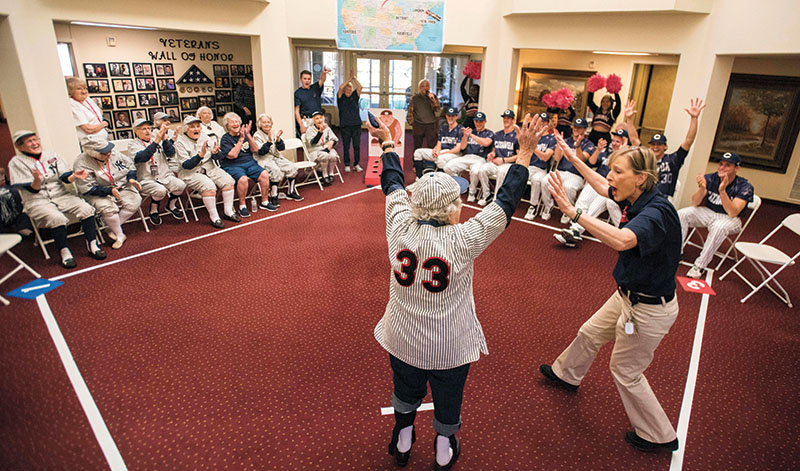 JON C. LAKEY / SALISBURY POST Margie Crowell reacts to hitting a home run as center co-manager Colleen Rongey (right) celebrates. The residents of Oak Park Retirement and members of the Catawba College baseball team recently competed in a beanbag baseball game at the retirement facility in Salisbury. The ladies on the Oak Park team dressed in New York Yankees costumes rented from a local shop to make the event more festive. Local radio personality Buddy Poole was on hand to announce the game over a loudspeaker with his typical radio flair.

The residents of Oak Park Retirement challenged the Catawba College baseball team to a game of beanbag baseball.

The game was part of the Heart and Soul Tour happening at the Oak Park Retirement communities. The residents are learning about the music, food and history of five different cities. Each city comes with its own set of activities, and the stop in New York City had to include a trip to the Yankee Stadium.

“What would it be like in New York without going to a baseball game?” Karen Leonard, activities director for the retirement home, said.

Leonard said the residents had a great time preparing for their big game. Two of the managers coached a team, and those two teams played each other earlier in the day. The winning team played Catawba.

Buddy Poole, general manager and radio personality for WSAT, was the game’s announcer, the Oak Park band provided the stadium tunes and the Catawba cheerleaders waved their pom-poms.

A diamond was created on the carpeted floor with white tape and chairs were placed at the bases.

The beanbag board was brought out, with holes that would get the players to each of the bases and a hole in the middle that would earn a home run.

After a hard-played game, the Oak Park Retirement Yankees got the win.

The Heart and Soul Tour is intended to provide the residents with activities that are creative, emotional, intellectual, physical, social, spiritual and vocational, which helps them live an engaged and enhanced life while at the retirement home.

During the stop in New York, the Salisbury Swing Band was invited to play at the home and the residents went to see “Act 1” by the Piedmont Players.

The residents will explore Canada, Detroit, Nashville and Ventura, Calif.

They also plan to attend a Catawba College baseball game.

Oak Park Retirement is known to provide its residents with exciting activities. Leonard said some of the residents have gone skydiving and zip lining, as well as riding on helicopters and hot air balloons.

The residents have bucket lists, which they try and fulfill, Leonard said.

The more adventurous activities are fun for residents, Leonard said, but it was also nice to have fun within the walls of the home. The interaction the residents had with the Catawba players was priceless.

“They’ve had such a good time,” Leonard said.

Helen Wooten, a resident at Oak Park, said the game was good exercise and she had fun with the Catawba students.

“I think Karen did a beautiful job with putting it together with Catawba,” she said.

Jean Redding, another resident, said it was a lot of work for Leonard to put together, but it was better than sitting in a room watching television.

“We just thank Catawba College for being good sports,” she said.

Diana Ellenburg, a resident who helped do some of the research for the program, said she has been learning so much about the history of music and food in the different cities.

Ellenburg said everyone came together to make the day a success.

After the game, players on both sides gathered in the dining area for soft pretzels, soft drinks, chips, Cracker Jacks, nachos and boiled peanuts.

A rematch was scheduled during the Detroit portion of the tour.