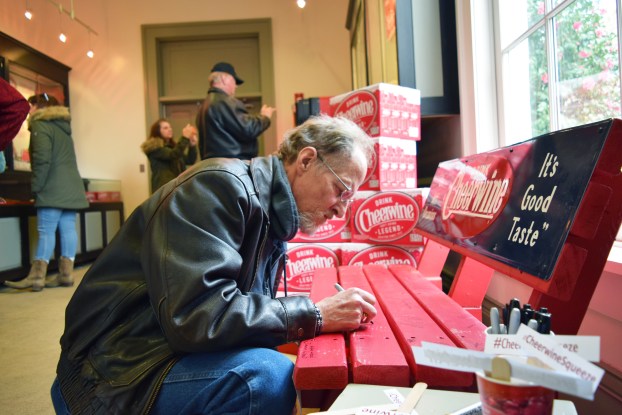 Charlie Dockham, a visitor to the Sunday grand opening of the Rowan Museum's Cheerwine exhibit, signs a commemorative bench in honor of the occasion. Rebecca Rider/Salisbury Post Left to right: Aaron Kelpey, Rowan Museum executive director, Joy Harper, head of marketing for Cheerwine and the great-great-granddaughter of Cheerwine’s founder, L.D. Peeler and Cliff Ritchie, president of Cheerwine, stand outside the Rowan Museum for the grand opening of a Cheerwine exhibit to celebrate the drink’s 100th year. Rebecca Rider/Salisbury Post

SALISBURY — Cheerwine kicked off its next 100 years Sunday at the Rowan Museum. The soft drink company, which started just a few blocks down Council Street from the museum in 1917, has made a name for itself and become one of Salisbury’s claims to fame.

The original Cheerwine building still stands on East Council Street, with the company’s logo as vibrant as ever.

Cheerwine has a “long, storied history” in Salisbury. Founder L.D. Peeler created Cheerwine while experimenting with soft-drink recipes during World War I sugar rationing. Instead of sugar, Peeler added a bit of cherry flavor, and a legend was born.

The new exhibit at the Rowan Museum catalogues the history of the company, and the drink that helped put Salisbury on the map. Visitors can see can and bottle designs from every decade of the drink’s 100-year history, and can even peek in on an old-timey soda parlor. And everywhere visitors turn, there’s red, red, red.

Ritchie said he enjoys looking at the early days of the hit drink — there’s still a lot of value and knowledge to be gleaned.

“We can take some cues from the beginning,” he said — like the drink’s early “Smile” slogan.

Ritchie is the great-grandson of founder L.D. Peeler. Two of Ritchie’s children, Joy Harper and Carl Ritchie, represent the fifth generation currently working for the business.

The company pushed through the Great Depression and World War II and today is distributed nationally.

“It’s really an honor for them to choose the museum to kick off their hundred years,” Aaron Kepley, executive director of the Rowan Museum, said.

The exhibit, containing photos and memorabilia, will be open until December 2017. Kepley and Ritchie urged anyone who has a private collection of memorabilia to consider loaning items to the exhibit.

The exhibit is the first of many centennial celebrations occurring this year. The company will also roll out a series of commemorative cans featuring seven designs which reflect the brand’s look from different eras.

Each can will sport one of 50 “Moments of Cheer” from Cheerwine’s history. Several $100 prize cans will be randomly sprinkled in 12-packs across the soft drink’s distribution area.

On May 20, Cheerwine will host an outdoor birthday bash and festival in Salisbury to thank customers and fans for their support over the past century. The party will feature live bands, free Cheerwine, a barbecue cook-off and yet-to-be-announced surprises for people who attend.

The museum is located at 202 N. Main St., Salisbury. More information is available at the museum’s website at http://www.rowanmuseum.org.

For more information about Cheerwine and its history, visit www.Cheerwine.com, on Facebook at facebook.com/cheerwine or on Twitter and Instragram @drinkcheerwine.

Carolina Beverage Corp. produces Cheerwine, which is available in supermarkets, restaurants, mass merchandisers and convenience stores in select states nationwide and through the website.

SALISBURY — Having recently arrived in Calcutta, India, during World War II, John C. Marley dashed off a letter to his old... read more