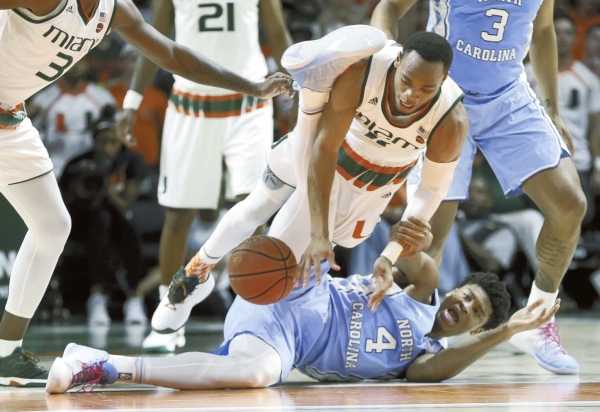 Outhustled by Miami, No. 9 UNC goes down

CORAL GABLES, Fla. (AP) — North Carolina coach Roy Williams’ team trailed by double figures in the second half against Miami when there was a scramble for a rebound.

Like the game, it wasn’t much of a contest.

“The ball was lying on the floor, and we didn’t have anybody dive for it,” Williams said. “They got it and made a 3. That was a big play.”

So it went for the No. 9-ranked Tar Heels, who were outhustled and outscored by Miami. Freshman Bruce Brown needed only 11 shots to score a career-high 30 points, and the Hurricanes deployed a swarming zone defense Saturday to upset the Tar Heels 77-62, ending their seven-game winning streak.

“It was a big-time kicking of our rear ends,” Williams said. “They were more aggressive in everything they did.”

The Tar Heels’ point total was a season low and 27 below their average, and they shot only 35 percent. The Hurricanes repeatedly got their hands on the ball against the taller Tar Heels, especially in the lane.

Miami also had a 41-36 edge in rebounding against the Tar Heels, who lead the nation in that category.

North Carolina (19-4, 7-2 Atlantic Coast Conference), which had climbed atop the league standings with its winning streak, was playing for the second time in less than 48 hours and looked it.

“It’s not like this loss counts as 20,” forward Kennedy Meeks said. “We’ve got a lot of season left.”

“We’re one of the best teams in the country,” guard Ja’Quan Newton said. “We’ve just got to get a couple more wins like this.”

The Tar Heels had scored at least 85 points in a school-record seven consecutive league games, but that streak was doomed by a season-low first-half point total. They missed 18 of their final 19 shots and trailed 39-22 at halftime.

Williams subbed for his entire lineup at one point in the second half, but no combination worked. The Tar Heels played without injured swingman Theo Pinson.

Brown’s point total was the highest by a Hurricanes freshman since they joined the ACC. He had 23 points before he missed a shot, and finished 8 for 11, including four 3-pointers. He also had five assists and two of Miami’s eight steals.

“Brown was tremendous,” Williams said. “We couldn’t keep him from getting to the basket, and when we backed off, he made 3s.”

Newton added 18 points and seven rebounds for the Hurricanes, whose biggest lead was 55-33. The Tar Heels were never closer than 11 after that.

North Carolina went 7 for 24 from 3-point range after sinking a season-high 14 baskets from beyond the arc in Thursday’s win over Virginia Tech .

Justin Jackson led the Tar Heels with 21 points. Guard Joel Berry II failed to shoot the Hurricanes out of their zone, going 0 for 8 and scoring two points, 13 below his average.

“They got back into their zone quick, and I don’t think we did a good job of attacking them,” Berry said.

The zone was a surprise, even to the Hurricanes. It wasn’t in their game plan, but coach Jim Larranaga switched to it after his team fell behind 11-2.

It worked anyway. Miami outscored North Carolina 20-2 during a 12-minute span, and the Tar Heels went the final 8:36 of the first half without a basket.

Pinson sat out after injuring his right ankle in Thursday’s win over Virginia Tech. He wore a boot Saturday, and no timetable for his return has been disclosed.

North Carolina’s frustration boiled over when guard Berry received a technical foul. “I’m better than that,” he said. “I let my team down. It won’t happen again.”

Williams said he believes the technical was the first on one of his players since at least 2012.

“Not acceptable,” he said.

North Carolina: The Tar Heels fell to 8-3 against the Hurricanes in Miami.

NFL Hall of Fame quarterback Jim Kelly, who played for the Hurricanes, spoke to the crowd at halftime.

“I always consider my favorite place — and always will — the University of Miami,” Kelly said.

Larranaga is hoping for another big crowd.

“I don’t want to tell the students who have night class to cut,” he said, “but maybe they can come for the second half.”