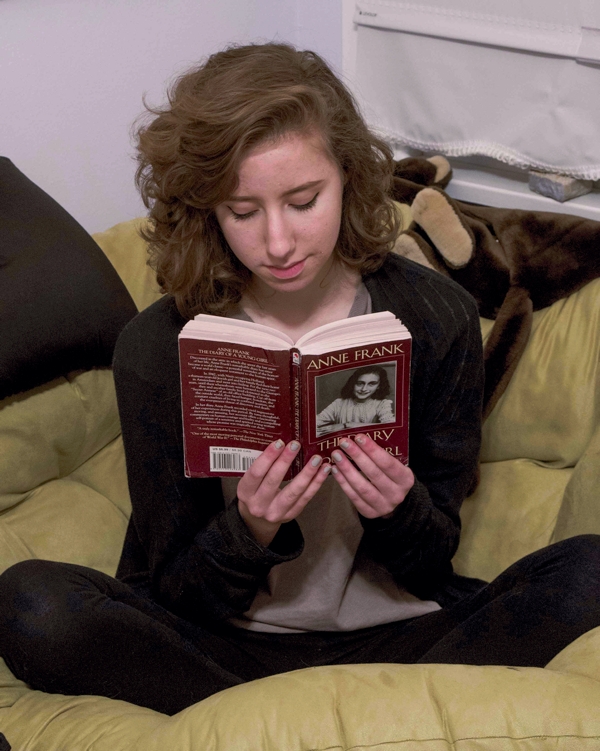 SALISBURY — It seems serendipitous that both the Salisbury Symphony Orchestra and St. Thomas Players are paying tribute to the life of Anne Frank in the month of February, but then again, maybe it isn’t.

Maybe it’s the Syrian refugee crisis or the resurgence of extremists or the growing numbers of children caught in the crossfires staring out at us from the news that makes Anne’s story more relevant — and cautionary — than ever.

Ava Holtzman, a 16-year-old sophomore at Carson High School, will play Anne in February in “The Diary of Anne Frank,” directed by Claudia Galup and produced by St. Thomas Players, Center for Faith & the Arts, and Lee Street theatre (Feb. 23-March 5).

When I asked Ava what it felt like at the moment she found out she’d been cast, she said, “I don’t think I’ve ever said ‘thank you’ more times during a phone call in my entire life. I was honestly just so incredibly excited that I would have the opportunity to tell a story that I personally feel very passionate about.”

Ava was talking my language — storytelling. I wanted to know more. Here’s how she responded to my questions.

Q: How old were you when you first read Anne’s diary?

A: I was in second grade when I read what was essentially a picture book adaptation of the diary and remember being instantly captivated by it. In seventh grade I read the full diary for the first time and then again more recently this year in tenth grade. I think what surprised me more than anything was just how much I related to Anne as a person. It’s so easy to think of her as this fictional character in an old storybook and to forget that she was a real person with thoughts and feelings that to me are still so prominent in the minds of teenagers today. It was so refreshing in a way to know that someone else’s mind worked in a similar way to mine and to see someone so close to my age living her life in that time and how different and challenging it was.

Q: How are you and Anne alike and not alike?

A: I would like to think Anne and I have a lot of the same drive. I absolutely understand her dreams of wanting to become someone remarkable and hoping to one day leave a lasting impact on the world. However, I also think she has a lot more confidence than I do, which is a trait I truly admire about her.

Q: You already resemble Anne physically. Is there anything in particular you plan to do to make the transformation complete?

A: I’ve recently reread her diary, which helped a lot in terms of understanding more about how to recreate her personality. I plan on doing more research on her family in general as well as on the time period. I think that by learning more about everything she must have known and experienced, it will make my understanding of how to play her feel more natural and come across as more realistic.

Q: What scene do you think will challenge you most?

A: I’m really looking forward to the challenge of some of the tense scenes between Anne and her mother/sister. As a teen myself as well as someone who knows the challenges of growing up and dealing with complicated family antics, I think those are going to be some of the most relatable to people, and therefore I want to work to make them as realistic as possible.

Anne Frank has been a shining light since her diary was first published in 1947, two years after she perished in the Bergen-Belsen concentration camp at age 15. The exquisite pianist Renee McCachren, accompanied by the Salisbury Symphony Orchestra under the direction of David Hagy, perform “Elegy for Anne Frank” as part of the “Look Who’s Joining Us” family concert at 4 p.m. in Keppel Auditorium on the Catawba College campus.

The piece, by German-American composer Lukas Foss, was written to commemorate the 60th anniversary of Anne Frank’s birth (June 12, 1929).  Scored for solo piano, chamber orchestra and narrator, the work is eight minutes of atmospheric music and passages from the diary that Anne kept while she and her family were in hiding from the Nazis.

Jennifer Hubbard, managing director of St. Thomas Players, is a writer who was inspired by Anne Frank.