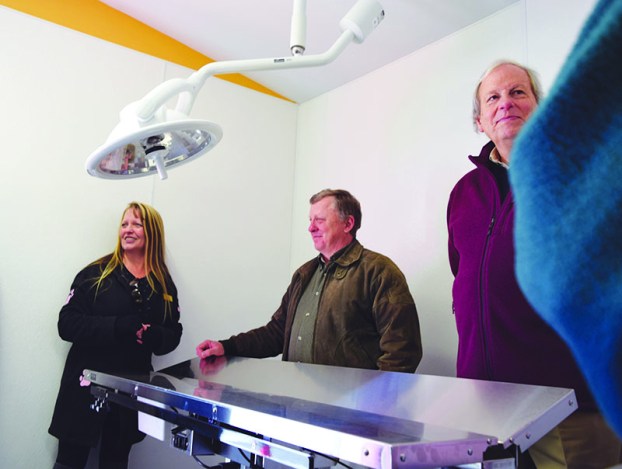 Nina Dix, left, chairwoman of Shelter Guardians, and Bob Pendergrass, center, animals services director, stand around the shelter's new operating table. In a few weeks the Rowan County Animal Shelter will be able to spay and neuter animals it adopts out in its new surgery and intake room. The addition, and the equipment inside, were paid for by donations from Shelter Guardians. Rebecca Rider/Salisbury Post

SALISBURY — It won’t be long until animals adopted from the Rowan County Animal Shelter will receive in-house spay and neuter services. The shelter held a grand opening Saturday morning for its new surgery and intake room, which was paid for by donations from local nonprofit Shelter Guardians.

Animal Services Director Bob Pendergrass said that the new surgery was a “wonderful step forward” for the shelter.

The intake room is the second shelter addition to come from private donation. Last year, the shelter opened a new cat wing thanks to donations by Winston-Salem philanthropist Christine Morykwas.

“We can’t do what we do without volunteers and the support of the community,” he said.

The surgery puts the shelter “on the fast track” to making sure every animal of age adopted from the shelter is spayed and neutered before leaving. Pendergrass said the move will help tackle animal overpopulation problems in the county.

Currently, the shelter offers new pet owners a voucher that can be used at local veterinarian offices to get pets spayed and neutered.

“But not everybody takes advantage of it,” Pendergrass said.

The in-house spay and neuter program will replace the voucher system. The procedure will be covered by regular adoption fees. The intake room will also allow shelter veterinarian Dr. Mari Maristany to examine animals for injuries or when they’re brought to the shelter.

County Commissioner Greg Edds Saturday congratulated the shelter on its forward progress in recent years. In just a few years, the shelter has gone from having a gas chamber to making strides towards increasing adoptions and decreasing euthanizations.

Shelter Guardians Chairwoman Nina Dix said she was just grateful for a large turnout at Saturday’s ribbon cutting. She said the event had a lot of good and positive energy.

“Without it, nothing would happen,” she said.

The new addition will eventually feature a bronze plaque in honor of shelter guardians.

“It’s a great thing that this is done,” Church said.

Shelter staff have been using the new addition since December 2016.