The true, correct story of what happened at Donald Trump’s inauguration 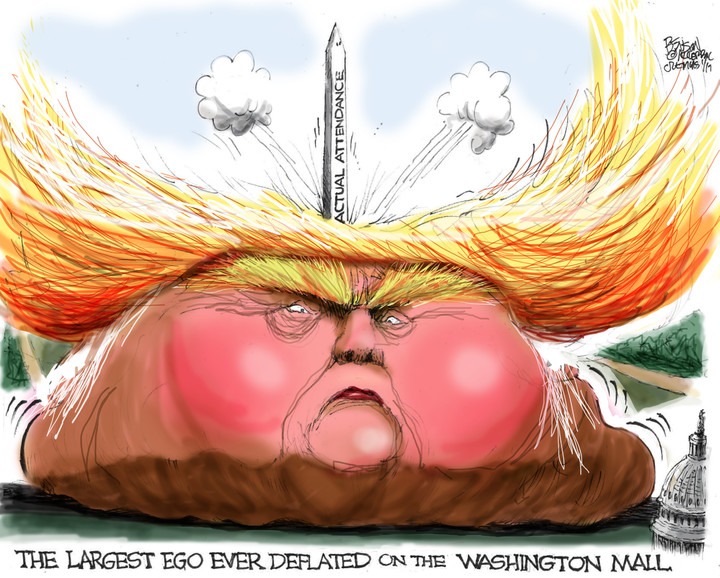 I apologize to Donald Trump. As Sean Spicer so wisely said at his first news conference on Monday (It was the first. The one that happened on Saturday did not happen at all, and I recognize that!), it is unfair to be so mean and negative all the time.

Here is the fair and unbiased story about the inauguration written in compliance with the Trump style guidelines that we should have been obeying all along.

Nothing that has ever happened or will ever happen was as great as Donald Trump’s inauguration.

The crowd was magnificent and huge, bigger than any crowd had ever been before! It stretched all the way to the moon. The Pope, who was there, confirmed it.

“Thanks for being here, Pope,” Trump told him.

“Are you kidding? You’re my best friend,” the Pope said. “I wouldn’t miss your big day for anything!” He gave Trump a big high-five.

Everyone in the world had come there at great expense. They sold all their possessions — their homes, their “Hamilton” tickets, which were worthless to them — to raise money to come and see this great sight. They could not believe that a perfect being such as Trump even existed. They thought that he was a myth or a legend or a decades-long series of fabrications.

But then they saw him, and their doubts fell away.

The media was there, too, and they were very sorry. “Donald,” the newscasters said, “we were mean to you. We used to laugh and call you names. We were no better than all of the other reindeer. How can you ever forgive us?”

“Forgive you?” Trump asked. “I’ve already forgotten.” He smiled a big, beautiful smile. That was just who Trump was: forgiving, like Jesus, but blond.

It was a wonderful start to the day.

Everyone liked Trump’s speech and the words that he used. They liked even more the part where he rolled up his sleeve and showed off his bicep. It was a great bicep. It made the Rock so upset to see it that he threw something down on the ground and said “darn.”

Trump pulled out a violin and played a solo, and then he pulled out a guitar and played an even sicker solo. The whole ground was soon covered with women’s undergarments. (Millions of women were there to support Trump, and they were all AT LEAST sevens.) Also, every woman that Donald Trump had ever dated was there, and they were not upset with him, just ashamed that they had not lived up to his required standard.

Trump touched many people in the crowd in a way that they all thought was welcome and appropriate, and he cured their ailments, from cancer to autism.

“If only we could bottle your touch,” someone said, “children could stop getting vaccinated altogether.”

Then Trump served loaves and fishes to everyone there. There were enough loaves and fishes for everyone, and they all were Made in America and said “TRUMP” on them. It was like the Oscars, but also like Woodstock, but also like the Super Bowl, but also like the Sermon on the Mount. If you were not there, you should just go home and die, because nothing in your life will have purpose or meaning by comparison, not even holding your newborn child in your arms or having health insurance. This is what FOMO was talking about for all these years.

Bono, and Bruce Springsteen, and Elton John, and the Rolling Stones, and Beyonce, and all the top artists were there. They fought hard over who would be allowed to sing. Finally Bruce Springsteen won. Bono cried and cried, and the other artists had to console him. When Bruce Springsteen had finished singing, he walked over to Trump, extended his hand, and said, “You are the only real hero left in the world.”

The people were so excited that they built a very special stone pyramid just for Trump so that he would not have to wait until he died to see what his monument would look like. But they were silly to be concerned. Trump will never die!

A little child was in the audience, and he started to cry because the emperor was wearing so many clothes. Also, he could tell that he was not and never had been racist.

Trump’s beautiful big family was there. His favorite childhood dog was there, too, back from the farm where he still lives to this day.

Trump can talk to the animals, and his eyes are lasers. When the floor is lava, Trump can walk on it, but only Trump. When Trump points his finger at you, you have to lie down. But when other people point their fingers at Trump, he does not have to. Trump’s block tower is the biggest. He does not need a nap or a snack. He has the longest, biggest attention span. Everyone loves Trump, and what he has to say interests them.

Trump is the star. People love him.

He won the popular vote, too.

Alexandra Petri writes the ComPost blog, offering a lighter take on the news and opinions of the day. She is the author of “A Field Guide to Awkward Silences.”

Leaders need to prove they are pro-life — for…