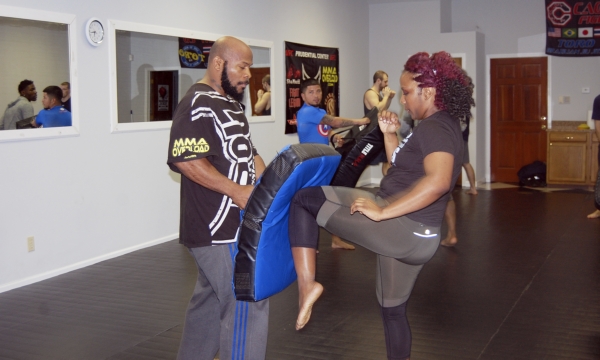 Amanda Raymond/Salisbury Post Rodney Wallace, owner of Kickfit, partners up with Sakinah Riley, who has been practicing for two weeks, during a class on Tuesday. Wallace opened Kickfit at 108 N. Main St. in January and offers kickboxing and grappling classes for children and adults.

SALISBURY — When you walk into Kickfit at 108 N. Main St., you’ll hear heavy breathing, feet shuffling on a mat and gloves and feet smacking against pads.

Some of the people there will be beginners while others have been kickboxing and involved in martial arts for years.

There is one thing everyone will have in common: they will all be sweating.

He received a football scholarship to NCAA Division II at Catawba College and was an All-Conference running back from 2001-2004. He finished his time at Catawba as the school’s all-time leading rusher.

Wallace said he started coaching other people halfway through his career and realized he liked doing it. He opened a MMA training school four years ago, but found that people were a little intimidated by the name. He rebranded the studio to focus more on fitness.

Wallace said he has received a lot of interest from putting advertisements on Facebook.

“A lot of people were into it,” he said.

He said some people are still nervous about attending a kickboxing class, but once they try it out and realize they aren’t “going to get punched in the face,” according to Wallace, they find that they can get a good workout.

“It’s just a better workout than running on a treadmill,” Wallace said.

While running on a treadmill or bike could get a little stale, Wallace said kickboxing and grappling can be more fun. Plus most of the work is done with a partner so there is a group atmosphere.

“If you want the cardio, if you want to burn calories, this is a fun way to do it,” Wallace said.

There isn’t a separate class for beginners. Wallace demonstrates the moves and lets the attendees go at their own pace. Once the beginners feel a little more confident, Wallace will give some tips here and there so they can improve their technique.

Technique isn’t the most important thing to Wallace.

Wallace said his goal is to target youth commonly labeled as troubled so they can have a place to work out their frustrations and a community to belong to.

The classes are $55 and prices are kept relatively low so that more children can participate.

And while those children are working out, Wallace said that gives him a chance to talk to them about their future and show them that there are better things out there for them.

“What they’re really going to learn is character,” he said.

Wallace welcomes all fitness levels and ages to the studio and also allows people to visit a few classes to see if the classes are right for them.