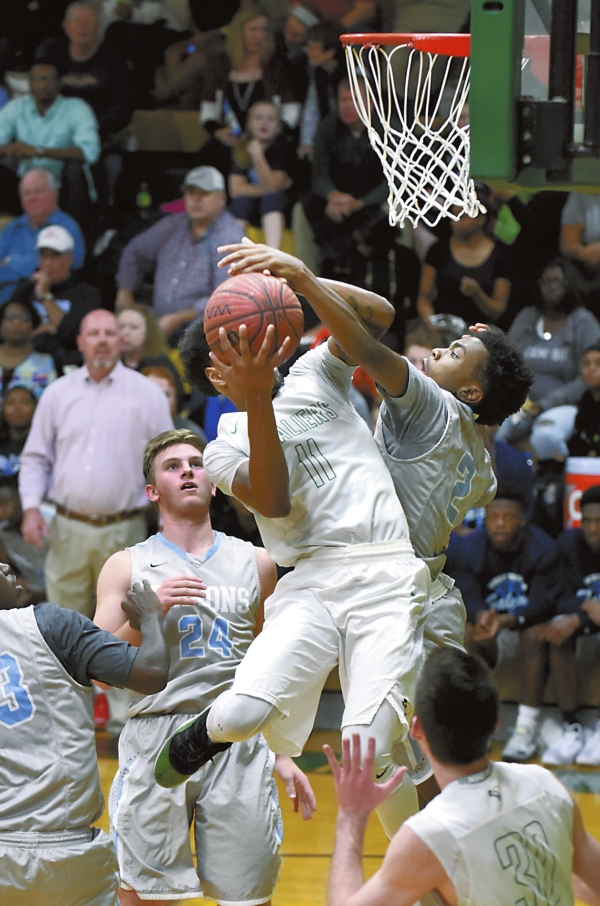 SPENCER—  North Rowan’s 6-foot-3 sophomore Dayjuwon Cooke, alone in an ocean of orange jerseys, grabbed tough rebounds in the fourth quarter, and the Cavaliers pulled away to beat Lexington, 84-67.

North’s senior leaders — Joe Scott and Henderson  Lentz — shelled the Yellow Jackets for 52 points, but Cooke, who had 12 points, a  key block and  two forceful dunks, was an equally important part of another Central Conference Conference win by the Cavaliers. North finished off a sweep of rival Lexington.

“Cooke is a mild-mannered young man who doesn’t show a lot of emotion, but he has a passion for basketball,” explained North coach Andrew Mitchell.  “He’s gotten stronger. He’s worked very hard in his weightlifting class. He’s grown up a lot in the last month.”

North (9-8, 4-1 CCC) was struggling to score more than 50  points a month ago, but a shift of the veteran Scott to point guard has energized the Cavaliers, champions or co-champions of their league for  seven straight seasons, and still in the hunt to make it eight.

“Moving Joe to the point got him looking for his teammates first,” Mitchell said. “What has surprised him is that once he started finding open teammates, it also started opening up more things for him to drive — and he’s a finisher.”

Scott finished so often on Friday  he scored 31, the second-biggest scoring game of a fine career that has netted 968 points for the Cavaliers. And it was a marvelously efficient 31. He shot 12-for-14 from the floor, made his only 3-point try, and went 6-for-8 from the foul line.

“I go into each game now, not worrying about scoring points,” Scott said. “I just ask myself how I can help a teammate get open. It’s been working for us. The team has  gotten better.”

North’s physical victory was more challenging than the final margin indicates. Lexington (9-10, 2-4 CCC) scrapped, kept constant pressure on the Cavaliers and got 23 points from hard-driving guard Adrian Craven and 20 points and 12 rebounds (nine on the offensive end) from star Marquise Jordan, who is playing through an injury.

It was a wildly contentious game. Lexington coach Jon Weavil didn’t go the distance, banished after two technicals were called on the Lexington bench. Scott and Lexington’s Cameron Peoples  also received technicals after they apparently staged a contest to see who had the most intimidating stare.

Lexington was terrific on free throws (21-for-26), surprising accuracy that helped off-set dismal shooting from the floor (29.6 percent) and from the 3-point line (4-for-19). There were an awful lot of Lexington misses, and Cooke and Lentz (21 points, eight rebounds) pulled them down.

North shot a tremendous percentage (63 percent from the floor and 6-for-11 on 3-pointers). That explains how the Cavaliers were able to survive 27 turnovers. There were stretches when they turned it over on three or four straight possessions.

Scott and Lentz combined for 18 points in the first  quarter, and Scott’s pretty step-back 3-pointer was ruled  a buzzer-beater for a 24-18 lead.

The second quarter was mostly a foul-shooting contest, and Scott made four in a row after he was fouled and Lexington’s displeasure with the call tacked on a technical foul. Lentz usually shoots North’s technical free throw, but after Scott made the two free throws for the personal, Scott confidently waved off Lentz and then made the technicals himself.

“I was glad to see he had that kind of confidence in himself  to make two more, and it’s not like Henderson got upset about it,” Mitchell said. “They’ve become true leaders for us. This is their team.”

Malon Herron-Cuthbertson hit two 3-pointers in the second quarter to push the Cavaliers to a 49-39 halftime  lead. Scott had 21 points at the break.

Lexington made its run in the third quarter, getting within eight a couple of times, but a dunk by Cooke fired up the crowd and shifted momentum back in North’s direction.

“He’s become a really big help for us,” Cooke said. “I love to see him go up and dunk. He’s not scared that he’s going to make a mistake now. He’s playing aggressively, and it’s making us a better team.”

North led by 12 after three quarters and was able to maintain that lead thanks to four Scott buckets before he fouled out with 1:44 remaining. When Scott left,  North was in charge, 78-66.

“I didn’t realize Joe fouled out,” Cooke said. “I might have been more worried if I’d known that.”

While Scott and Lentz (5-for-8, three 3-pointers) were high-percentage options, Cooke was perfect. He was 5-for-5 from the field on his way to 12 points.

“It was an emotional game,” Cooke said. “Our leaders did a great job, and I got most of my buckets off our defense.”

Herron-Cuthbertson had 11 points, while Brevin Goodlett helped out with seven. Scott had four assists.

North has to come back and play another tough game tonight at Catawba against Salisbury at 7:30 p.m.

North Rowan’s girls picked up their first Central Carolina Conference win of the season on Friday.

After a shaky first quarter, the Cavaliers (2-14, 1-4 CCC) took control in the second quarter. They built an 18-11 halftime lead by making free throws. North with 8-f0r-10 at the foul line in the quarter, with Aundrea Godfrey making three.

North, which stopped a four-game losing streak for coach Ron Bost, achieved separation in the third quarter when Taren Sherrill got hot. All of her seven points came in that quarter, including a 3-pointer that expanded the lead to double digits. North led 33-19 after three quarters.

Leading scorer Brianna White took over for the Cavaliers in the fourth quarter. She poured in  nine of her 20 points in the final period.

North led by as many as 19 points before a late charge  by Lexington’s Mikenzie Harvin tightened things up a bit, but North was never in serious danger.

Bea Connor scored in every quarter and had a steady 11-point effort for the Cavaliers.