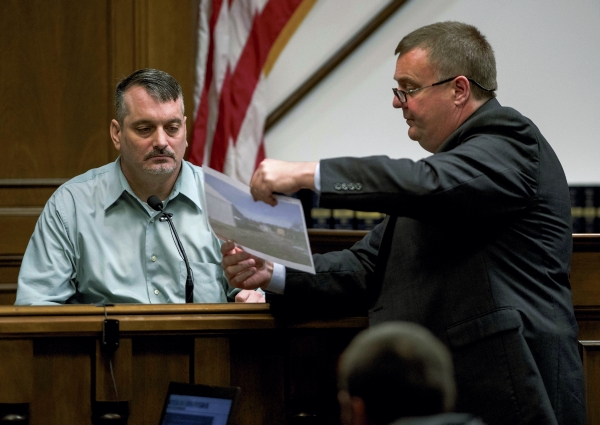 SALISBURY — The ultimate question that defense attorney Darrin Jordan wanted jurors to answer without uncertainty was this: “Did Jeff Steen on Nov. 5, 2013, murder his grandfather and beat his mother?”

It’s the question that Jordan and prosecutors have been trying to answer during the three-week trial through the testimony of DNA experts, Rowan County investigators, medical personnel, family members and one of the victims, Sandra Steen, as well as the accused, Jeff Steen.

Jordan told jurors during his closing statement Friday that his client does not admit any of the charges against him.

“The issue in this case is whether the state has proven to you beyond a reasonable doubt that Jeff Steen is the perpetrator,” he said.

Jordan described the red flags Rowan County Detective Jason Owens had raised shortly after his first interview with Jeff Steen. Steen recounted to the investigator how, on Nov. 6, 2013, he discovered his mother injured and on the ground and his grandfather, J.D. Furr, dead.

Furr was found beaten in the backyard of his River Road farm in Richfield. Investigators testified that the murder weapon, a potato hoe, was found lying beside the 87-year-old’s body. Sandra Steen, then 62, was found in the driveway.

Owens testified that he and other investigators believed at the time that events occurred as described by Jeff Steen did not add up. Sandra Steen told investigators during hospital interviews that her son had left the farm that night and that she was attacked from behind about five to 10 minutes later.

“By the time Detective (Travis) Allen got done with her, it was a few seconds,” Darrin Jordan told jurors.

Jeff Steen testified that in five to 10 minutes, he could have been out of the driveway and onto Stokes Ferry Road headed to his Albemarle home.

Jordan said another red flag raised by Owens was the type of shirt Steen was wearing when he went to his grandfather’s home on Nov. 5, 2013, to install a ceiling fan. Sandra Steen said she scratched her attacker on the arm; investigators found scratches on Jeff Steen’s forearm.

“I’m not sure you even know what color shirt he even had,” Jordan told the jury.

The attorney said the reason his client downplayed his financial problems with detectives was pride. He said the last thing Steen wanted to talk about with strangers was how he didn’t know how to manage his money.

Steen’s former girlfriend, Adrienne Dixon, now Adrienne Eller, testified that she regularly begged Steen to help her pay the bills. Steen was behind on his car payment, his car insurance had lapsed, he owed back taxes and he feared being laid off from his job at Norandal, according to testimony.

Jordan said the only two people who cared about the farm were Furr and Jeff Steen. He said his client often helped out at the farm.

Jordan added that neither Candice Swift nor Bridgette Steen, Jeff Steen’s sisters, had been to the farm often. Jurors learned that Furr kept a daily journal of who came to the farm and what he did that day.

Jordan said the first chance Sandra Steen got, she sold part of the farm to Ed Listerman, a neighbor and friend of her father.

“Sandra Steen is not on trial. She didn’t do anything wrong,” Rowan District Attorney Brandy Cook said in her closing statement to jurors.

“Her father was brutally beaten only feet from her, but she didn’t know that,” Cook said.

She said Sandra Steen loved her family and as well as her son, whom she still loves.

Cook said Sandra Steen was working six days a week taking care of others and also providing for her grown son. Sandra Steen worked as a nurse with Bayada. She had taken on extra shifts to help her son pay some of his bills, according to testimony.

Both Sandra Steen and her father had told Jeff Steen they would not loan him any more money.

Investigators found $10,000 in a shed on the farm that Furr had tucked away in a locked fire safe.

Investigators said when they processed the crime scene, Furr’s cashless wallet was lying behind his body. Steen told the court Friday when he came upon his grandfather after realizing he was dead he “didn’t know what I was thinking” and picked up the wallet.

Steen said he immediately put it down. He told his sister, Candice Swift, that he picked up the plastic photo insert and was going to put it back in the wallet, then realized his fingerprints would be on the wallet so he dropped it.

Steen never told investigators he picked up the wallet, Cook said. DNA experts said there was no DNA belonging to Steen on the wallet or on the murder weapon.

Steen testified that he was facing his grandfather when he approached. Assistant District Attorney Tim Gould told Steen during his testimony that there was no way he was kneeling in front of his grandfather and put the wallet down because it was found behind Furr’s body.

Cook said once Sandra Steen was able to think more clearly after her hospitalization, she told investigators that her attacker came behind her within seconds.

Cook reminded jurors of the testimony of SBI agent Michelle Hannon, who said that any epithelial DNA or skin cells of someone who may have touched the gardening tool once may not be there even if that person actually touched it.

Hannon said DNA from the person who touched it more often could mask that of someone who had touched the potato hoe only once. The agent also said weather conditions could break down DNA.

Furr was struck multiple times in the forehead and the back of the head with the potato hoe.

Furr had a Beretta pistol in his pocket that he used for protection and a pocketknife as well as other tools. Anyone who came onto the property uninvited would’ve been met with Furr’s gun, Cook said.

Cook noted there were marks in the ground indicating that Furr did not die quickly and he likely clawed at the dirt before his death.

Cook said Sandra Steen also tried to claw her way toward the house to get help, but it never came. She was outside overnight in 31-degree weather. She was so cold her fingers were still in a locked position when EMS personnel administered care to her at the scene.

Jeff Steen had said his mother must have scratched him the morning he found her. But doctors said Sandra Steen would have been too weak and, because of her clenched hands, she could not have scratched her son then, Cook said.

Cook said Sandra Steen also testified that the family’s dogs usually barked at strangers, and she didn’t recall them barking the night of the attack. Cook said that would indicate the dogs were familiar with the person on the property.

“You heard her tell you she didn’t see or hear his car leave,” Cook reminded jurors.

Two weeks before the murder, Cook said, Sandra Steen had told her father how much her son had borrowed from her. She said that made Jeff Steen angry enough to confront his mother.

Cook said that contrary to what the defense attorney said, Sandra Steen is the one who told investigators, “I think my son did this.” She said Sandra Steen had nothing to gain from accusing her son other than “heartache for her family.”

“You know your child’s touch. It’s interesting the attacker didn’t say anything, and that’s because Sandra Steen would know her son’s voice,” Cook said.

The trial resumes at 9 a.m. Monday with instructions to the jury.