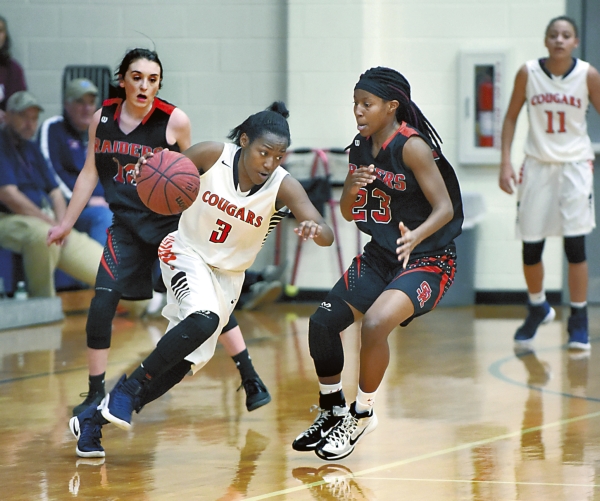 CHINA GROVE — Halfway through Friday’s South Piedmont Conference basketball game against visiting South Rowan, Carson’s girls had to be wondering what hit them.

The Cougars had made only six field goals, had missed seven free throws and watched their run-and-gun transition offense slowed to a crawl. Predictably, they headed to their locker room, 11 points down.

“We didn’t do a lot right in the first half,” said coach Brooke Misenheimer. “We didn’t play good defense and had a really hard time scoring. When we had good looks, we didn’t knock shots down. Nothing was going our way.”

They did the hokey-pokey and turned themselves around in the second half — rallying from a 16-point deficit to win, 51-42.

“South is a really good team. It’s never easy with them,” junior guard Olivia Gabriel exhaled after Carson (16-3, 11-2) won its fifth straight conference game. “We were getting discouraged, but we’re good in tight situations like that.”

Carson trailed, 31-15, late in the second quarter when it first showed signs of life. Its comeback started when sophomore McKenzie Gadson hit a free throw with 1:26 remaining in the half and teammate Maren Shumaker converted a pair of last-minute layups.

“First half, we played good basketball,” South coach John Davis said after the Raiders (11-8, 7-6) had their modest, two-game winning streak snapped. “Until the last two minutes, when we got careless. But we were ready. We didn’t come here to steal a game. We came here to win.”

South seemingly took control late in the first quarter and early in the second when it drained three consecutive 3-pointers to take a 20-11 lead. By the time super-soph Janiya Downs muscled down the lane and hit a floater, the Raiders were threatening to run away and hide.

“We were getting back on defense and turning it into offense,” South point guard Riley Corriher said after scoring a team-best 15 points. “All we had to do was go out and get a few baskets in the second half  and keep our momentum going.”

Instead, the Raiders made only three baskets and scored just 11 points in the second half. Carson scored 14 unanswered points in the third period and went ahead, 34-33, when Gabriel sank two free throws late in the quarter.

South recovered and went up, 39-34, on Corriher’s 3-ball from the top of the key with 7:12 remaining. Carson didn’t take the lead for good until five-foot guard Taylor Wiggins buried a 3-pointer from the right side with 3:28 to go.

“At halftime, no one was sure what was going to happen,” said Gadson, the game’s high-scorer with 17 points. “But in the second half, we switched to a triangle-and-two and did a good job on their two main scorers (Corriher and Downs). We fought hard, got some charges and that got us back into the game.”

Carson finished with a flurry, outscoring South 10-1 over the last four minutes.

“We made everything in the first half,” Corriher said. “In the second, we went cold. It’s disappointing because we know we could have won that game. We got too caught up in having that big lead and we lost focus.”

Misenheimer called it an “ugly win,” and added: “At this point in the conference it’s about finding a way to win. We found a way.”