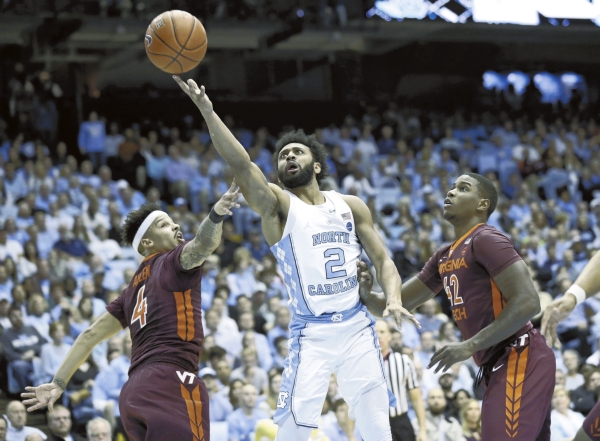 CHAPEL HILL (AP) — No. 9 North Carolina is putting up big offensive numbers, knocking down 3-pointers and hitting the glass better than any team in the country. Coach Roy Williams wants his team to play some tougher defense with all that, too.

Kennedy Meeks added 15 points and 14 rebounds for the Tar Heels (19-3, 7-1), who have climbed into sole possession of first place in the Atlantic Coast Conference with seven straight wins along with No. 6 Florida State’s loss at Georgia Tech on Wednesday.

Outside shooting was a question at times last season even in a run to the ACC championship and the NCAA title game, though this season’s group is shooting 38 percent from beyond the arc behind Joel Berry II and a huge leap from Jackson.

Throw in the nation’s No. 1 rebounding margin, and the Tar Heels are cleaning up when they do miss.

“I know a lot of guys on this team are confident so when they get in that position to shoot a 3, they feel they’re going to make it every time,” Jackson said. “I think overall we’re a lot more confident. I don’t know the stats I don’t know anything like that. I think with that confidence, it translates into more makes.”

UNC led 44-33 by halftime, then ran off 10 straight points midway through the second half to turn this one into a rout. The Tar Heels shot 49 percent and seemingly got every loose rebound for a 43-22 edge on the glass, helping them to 20 second-chance points.

“I think they have a Hall of fame coach and multiple McDonald’s All-Americans — that would be what I would say in a succinct way,” Virginia Tech coach Buzz Williams said. “But I also think it’s always been a part of how North Carolina has played. They’re going to play really fast, they’re going to have really big, long, athletic guys that chase the glass and that’s who they are.”

Virginia Tech: Visiting the state of North Carolina hasn’t gone well for the Hokies, who lost by 26 to North Carolina State in Raleigh earlier this month. Still, Virginia Tech is at .500 in the league to sit near the middle of the ACC with February looming and Buzz Williams didn’t sound worried about his team’s resilience.

“I hope that our culture inspires that to a certain extent, but I think it’s more about who we bring into the culture and how they were raised,” he said. “But I think thus far this year we’ve been fine.”

UNC: The Tar Heels’ offense is rolling along, whether by Jackson and Berry (15 points) outside or Meeks in the paint. UNC entered this game leading the ACC by a wide margin and ranked fourth nationally in scoring offense (89.4), and the Tar Heels have scored at least 85 points in seven straight ACC games for the first time in program history.

UNC lost junior swingman Theo Pinson in the first half after he rolled his right ankle, though team spokesman Steve Kirschner said he would sit out the rest of the game as a precaution. Pinson missed the first 16 games after October surgery for a broken bone in the same foot.

Roy Williams wasn’t happy with the defense, pointing out that last season’s team led the ACC in field-goal percentage defense for conference games to earn its title.

“Some teams are going to make shots, but we do have to do a better job defensively,” he said.

UNC: The Tar Heels travel to Miami on Saturday.