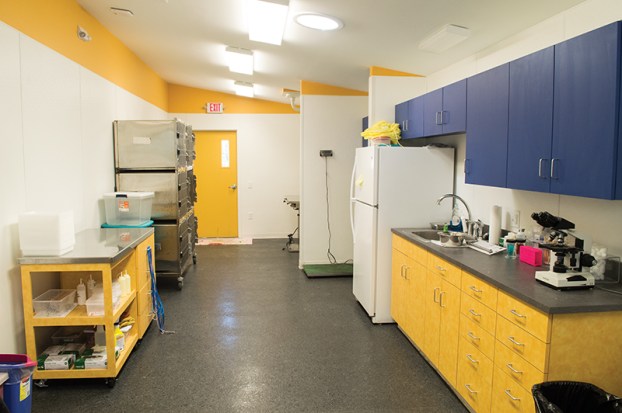 Josh Bergeron / Salisbury Post – Rowan County Animal Shelter Veterinarian Dr. Mari Maristany unpacks a set of surgical tools on Thursday in a newly built portion of the shelter. An open house will be held Saturday to celebrate the construction of the new portion, which will be used to intake animals and in-house spay and neuter procedures.

Editor’s note: this article has been updated to correct the time of the dedication portion of Saturday’s event.

SALISBURY — For the second time in as many years, Rowan County on Saturday will hold a grand opening for a privately funded addition to the animal shelter.

This is the second time that Rowan County’s animal shelter has benefited from a private donation. Last year, the shelter opened a cat wing donated by Winston-Salem philanthropist Christine Morykwas.

The new intake and surgery room has been used by shelter staff since December. At 11 a.m. Saturday, the shelter will have an open house and dedication for the new room. The dedication ceremony, which is open to the public, is scheduled to be at 11:45 a.m.

Any animal that is old enough will be spayed or neutered before leaving the shelter. In-house spay and neuter services will replace a voucher system that saw mixed success. Animal Services Director Bob Pendergrass said most people haven’t used spay and neuter vouchers, which are included in the cost of adoption.

“If we don’t make sure animals get spayed or neutered, they’ll have the opportunity to reproduce,” he said.

In addition to building the intake and surgery room, Maristany said it’s important to note the equipment Shelter Guardians has provided. Maristany said she called Dix and asked if Dix knew where to find a specific piece of equipment. Within hours, the item showed up at the Rowan shelter.

When asked Thursday about her organization’s donations, Dix noted the importance of in-house spay and neuter services.

“Right now, the animals are going out and reproducing because everyone has known for years the voucher system didn’t work,” Dix said.

She said in-house spay and neuter services will put the animal shelter at the “very top” of the list of the best shelters in North Carolina. It’s also rare for an animal shelter to have an in-house veterinarian, she said.

In-house spay and neuter services are scheduled to start in the spring.

Also starting soon, Pendergrass said, will be a procedure for animal adopters to reserve animals through an “intent to adopt” form. He said the form will allow shelter staff to spay or neuter animals before adoption. Animals who may still be in a holding period before they’re adoptable can also be reserved, Pendergrass said.

Empty Bowls to return this year