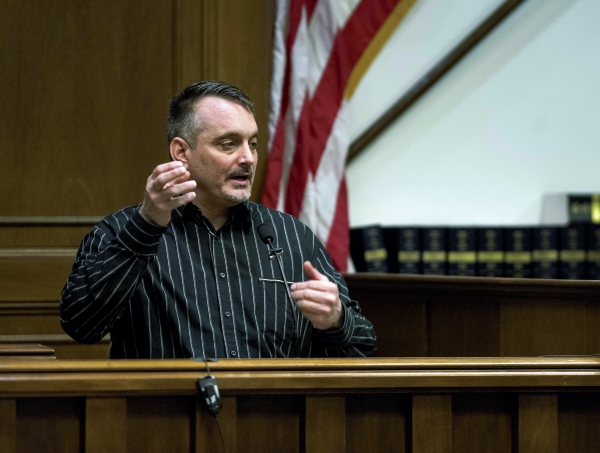 Jeff Steen testifies about his discovery of his murdered grandfather

SALISBURY — “There was so much blood there,” Jeff Steen said as he testified Thursday and described how he discovered the lifeless body of his grandfather on the morning of Nov. 6, 2013.

Steen provided what were at times lengthy answers to questions asked by his attorney, Darrin Jordan, during the final days of his three-week trial on murder charges. Steen, 43, said his grandfather’s face was toward him as he approached the body lying near the back steps of his Richfield farmhouse.

Rowan County Sheriff’s Office investigators said J.D. Furr, 87, had been beaten to death with a potato hoe that was still lying beside his body.

Steen said he didn’t want to walk toward his grandfather’s head because of all the blood. He said he shook the body and knew immediately that his grandfather was already dead.

“It’s like I couldn’t believe what I was seeing,” Steen said.

Steen said at some point, he picked up his grandfather’s wallet. He said he didn’t know why he did that but quickly realized he shouldn’t have and placed it back.

“Jeff, you didn’t take anything out of the wallet, did you?” Jordan asked.

Steen said he made his way back to his severely injured mother, Sandra Steen, whom he said he first saw when he got out of his vehicle that morning.

Detectives also testified that Jeff Steen owed money to both his grandfather and his mother.

Sandra Steen told Rowan investigators her attacker came up behind her only moments after had said goodbye to her son on the night of Nov. 5, 2013. She first said she believed her son was playing with her but then realized the person choking her was trying to kill her.

Sandra Steen said she scratched her assailant on the forearm and tried to fight back.

She didn’t immediately tell investigators that she believed it was her son who attacked her. Detectives interviewed her at least four times and, in the end, she told them Jeff must have been the person who tried to kill her.

Jeff Steen said while working the night of Nov. 5, 2013, some metal tools fell onto the ground and bounced up and hit him in the face. One of the tools busted his lip. He said he was wearing a hardhat without a face shield.

Rowan Detective Jason Owens asked the morning of Nov. 6, 2013, to see any injuries Steen might have had and Steen showed the detective his hands. After learning Sandra Steen fought against her attacker, causing scratches to the person’s arm, Owens returned to Jeff Steen and asked to see his forearms.

Investigators took numerous pictures of injuries to Jeff Steen’s hands, scratches to his arm and what appeared to be a busted lip.

He told the court his relationship with his grandfather was a good one. In fact, Steen said, “he’s the father I always thought I should have had.”

After hearing that comment, Steen’s father, Billy Steen, who was sitting in the audience, began to dab tears from his eyes.

He described the fence he had gone to repair Nov. 6, 2013, and how his grandfather had asked about it months earlier. Steen said his grandfather didn’t want to have to pay his father, Billy Steen, so Jeff told him he’d take care of it.

Jeff Steen’s testimony corroborated what law enforcement and other family members have said about Jeff owing his grandfather and mother money.

“I owed him money, so I said knock it off what I owed him,” Steen testified.

He said sometimes his grandfather offered to give him gas money, which he would take.

Steen borrowed $1,000 from his grandfather to make car insurance payments. He said he was behind and was hoping to use the money to catch up but realized he really didn’t need it. He paid some bills.

He estimated he owed his grandfather half of the $1,000 he’d borrowed.

Steen said his grandfather never told him how close he was to paying off his debt, but he assumed Furr would tell him when it was paid.

“He said, ‘This is the last time,’ ” Steen, adding that he had not planned to borrow anymore money.

Steen said he thought he and his mother had a good relationship. He had borrowed money from her after getting behind on a car payment.

Steen said he had bought his ex-wife, Stacy Dunn, a van, which she later said she didn’t like. He said he had to let the van get repossessed and that ruined his credit.

Steen said the Nissan Altima he and his son drove was in his mother’s name. Steen primarily drove a Suburban.

He intended to go with his mother in 2009 to buy himself a car to help his credit, but because of the van repossession, his credit was not good. His mother was able to get the car. He said he had been laid off from his job and was not able to pay all his bills.

He began working at Norandal in January 2012. He said he had to go on medical leave after being diagnosed with dystonia. He thought he had a stroke and was out of work for two months.

He said he was behind on child support, which was $1,300 a month prior to obtaining custody of his son Jordon and about $775 afterward.

Steen told the court he suggested his mother to take out a loan after she said she didn’t have enough money to go on a trip to Texas. He asked her to make one car payment and he’d take over the payments.

Jordanasked his client if he owed his mother $6,000.

“I take her at her word,” Jeff Steen said.

Steen said he believed his mother was calculating several things he could’ve borrowed for over the years including clothes she’d bought him or his children.

He said he was ashamed he’d placed his mother in such a financial position.

“They said my mom had identified me as her attacker,” Steen said.

She said prior to the trial, their relationship was good.

Bridgette Steen said after her sister, Candice Swift, told her she needed to come help take care of her mother, she left her job working with autistic children to help her mother for about a year.

She told the court she was not aware of her brother’s financial problems.

“I had my own finances to worry about,” she said.

Bridgette Steen said she was so upset after learning of her grandfather’s death and her mother’s assault that her daughter, Megan Phagan, had to help her into the shower and drive her to the hospital. She said her mother kept asking where her J.D. Furr was and she told her they would discuss it later.

Sandra Steen told Bridgette to tell Furr she loved him, and Bridgette said she would tell him.

Once Sandra Steen was airlifted to Carolinas Medical Center in Charlotte, Bridgette Steen said she asked her mother what happened. She said she wanted to know the truth.

Bridgette Steen said all her mother kept saying was that when she turned slightly, she could see her attackers’ “Mexican beady eyes.”

Sandra Steen also told her daughter that the assailant had on a ski mask.

District Attorney Brandy Cook asked Bridgette Steen when she contacted her office with information about what her mother said to her.

Steen said she contacted Rowan Sheriff’s Detective Chad Moose. She also said when she or other members of her family contacted the District Attorney’s Office, they were told that investigators didn’t need further details because they had enough information for a trial against Jeff Steen.

“Have you ever made statements that you were on your brother’s side?” Cook asked.

“I have not said that,” Bridgette Steen said.

The trial is now likely to carry over into next week, possibly through Monday.

Jeff Steen will resume his testimony this morning. The trial continues at 9:30 a.m.