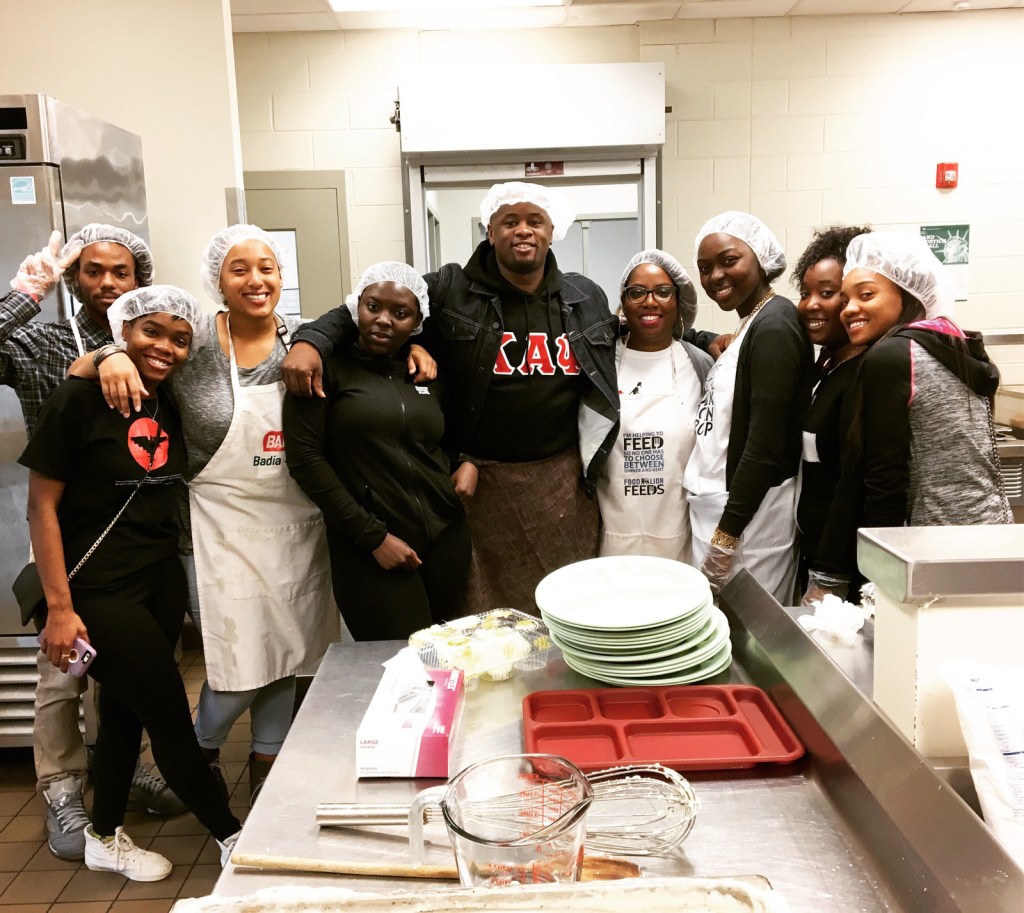 SALISBURY — Last fall, Stephen Collins wanted to move because he, his wife and their two children had outgrown their crowded, two-bedroom apartment. So Collins, of Salisbury, applied to Habitat for Humanity, which uses volunteers, donations and homeowners’ sweat equity to build affordable houses.

Turns out Collins and his family were helped by Habitat and also by a dedicated group of juniors from nearby Livingstone College. That’s because, led by Terrell Richardson, members of Livingstone’s class of 2018 have taken to heart President Dr. Jimmy R. Jenkins’ message of community service.

“We empower ourselves by empowering others,” said Richardson, 21, junior class president. “We understand how important it is to engage the community, and this strengthens our ties with the Salisbury community.”

By March, thanks to Habitat, its professional volunteers and the Livingstone juniors, Collins, who is from Liberia, will move his family into a three-bedroom house. “Habitat and the Livingstone students have been instrumental in getting me to a better place,” a grateful Collins said.

The 2016-17 academic year has been a banner one for service projects taken on by the junior class. Roughly 25 juniors have participated in various service projects since classes began last fall.

Besides helping to build the Habitat House, Livingstone juniors have participated in myriad activities including volunteering at the J.C. Price Head Start Center on Fridays, singing Christmas carols at the Brian Center of Salisbury and passing out health care information on World AIDS Day.

Although the Livingstone students travel a few blocks to the J.C. Price preschool on West Bank Street only on Fridays, they are most welcomed whenever they can stop by, said Head Start Center Director Ginger Jenkins. The center is named after Livingstone’s founder and first president Dr. Joseph Charles Price.

Ginger Jenkins said she’s especially happy to have so many successful African-American men helping out, adding that her charges, their parents and the Head Start staff appreciate the symbolism in a group of young black men doing something positive in their community.

Recently, in honor of Dr. Martin Luther King Jr.’s birthday, a contingent of junior class members went to Rowan Helping Ministries to pack 100 bags of food for the needy, an active effort to live out the philosophy of empowering one’s self by empowering others.

The ministry, developed from an organization in 1967 that was founded by several downtown churches, is a Salisbury-based shelter, food kitchen and general aid center.

Richardson, a member of Kappa Alpha Psi Fraternity Inc., is no stranger to volunteering or community service. During his senior year of high school in Wilmington he volunteered at his hometown police department. He has served as vice president of Livingstone’s chapter of the NAACP. He’s also worked as a residential assistant, or RA, in off-campus housing.

Last fall Richardson worked with Jimmy Wilson, 2016-2017 Mister Livingstone College, to organize “100 Black Men in Suits,” an event designed to celebrate African-American men and their continuing contributions to their communities and the nation. Held during a weekly Wednesday assembly at Livingstone, the event was a huge success and culminated with the students, faculty and staff joining the college president for a photo on the front lawn in front of the iconic bear statue.

Getting the word out about various service projects has fallen mostly to the officers, who have relied on social media, like Instagram, and sign-up events in Aggrey Cafeteria. Richardson said the response has been good and the activities help build unity on campus.

Many of the junior class volunteers belong to SWAG, or Social Work Action Group, a club for social work majors. Working with friends has been especially rewarding, Richardson said, adding that some of the projects – for example building the Habitat House – teach skills that can’t be picked up in a classroom.

Shivonna Patterson, one of the Livingstone volunteers on the Habitat project and a social work major, said the work she’s been doing with the junior class complements her field of study.

“And we have had plenty of opportunities to help out this year,” Patterson said.