Jim Kelly draws on experience in campaign against cancer 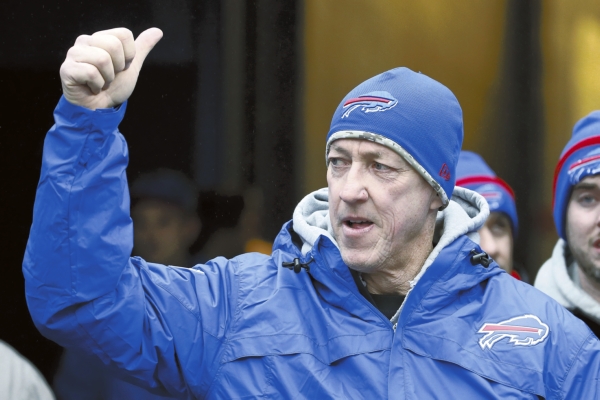 In this Dec. 27, 2015, photo, former Buffalo Bills quarterback Jim Kelly gestures prior to an NFL football game between the Buffalo Bills and the Dallas Cowboys in Orchard Park, N.Y. Kelly is drawing upon his professional and personal heartbreak, including his own two-time battle with cancer, to inspire others on how to beat the disease. He has teamed with several cancer organizations and pharmaceutical giant, Merck, to produce a promotional campaign titled "Your Cancer Game Plan." It is scheduled to debut on Wednesday, Jan. 25, 2017. (AP Photo/Bill Wippert)

ORCHARD PARK, N.Y. (AP) — For all his achievements, Jim Kelly’s life has been tempered with professional and personal heartbreak.

The Buffalo Bills Hall of Fame quarterback lost four consecutive Super Bowls in the 1990s and mourned the loss of his son, Hunter, in 2005.

And three years ago, Kelly was told his head and neck cancer had returned, despite a surgery nine months earlier. On his way home from the doctor’s office, Kelly pulled his car to the side of the road and cried because he didn’t know how to break the news to his family.

“Boy, I’ll tell you what, yeah, they broke down,” Kelly said.

“But it didn’t take them very long to realize they can’t be that way. They’ve got to be a positive influence on me, to keep me thinking positive and keep those thoughts in my mind that you’re going to beat this,” he said. “But I always thought that anyways. I knew I was going to kick (cancer’s) butt.”

Kelly learned about perseverance as he faced his challenges.

Cancer-free following his latest quarterly checkup, Kelly is drawing upon his experiences to aid others battling head and neck cancer.

It emphasizes nutrition, education, communication with caregivers and maintaining a positive attitude.

Kelly’s campaign specifically targets those with head and neck cancer because the disease alters a person’s appearance, sense of smell and taste. Eating is difficult, which leads to nutritional challenges. Effects on the face lead to self-esteem issues, leading patients to turn inward.

Kelly was diagnosed with squamous cell carcinoma in 2013 and had a portion of his upper jaw removed. Follow-up tests nine months later showed the cancer in his sinus, which led to radiation and chemotherapy treatments. Kelly lost 70 pounds while being treated.

Kelly still has trouble speaking, can no longer produce saliva and has lost the sense of taste.

But Kelly says staying upbeat helped him cope. He’s sharing his life experiences with others during various speaking engagements.

“I have a story to tell. I want people to understand that we’re all going to go through things in our lives,” he said. “It’s the attitude that you have and the people that you surround yourself with to be able to come out on top.”

Staying upbeat has benefits both emotionally and physically, said Buffalo-area cancer specialist Dhiren Shah, one of the doctors who treated Kelly.

Shah saw that in Kelly, who was given only a 10 percent prognosis of survival following the cancer’s recurrence.

“That was really inspiring to me in knowing if there’s hope for somebody like Jim Kelly, who had such a poor prognosis, I mean, my god, there’s hope for every patient out there,” said Shah, who is participating in Kelly’s campaign.

“Even if patients have to struggle, and some patients may not make it, I think we can help them make their whole battle with cancer an easier one,” Shah said. “And they can battle it with dignity.”

Kelly refuses to feel sorry for himself, which reinforces his desire to share his experiences with others.

“I have no room to complain,” Kelly said. “If tomorrow the good Lord decides that’s my last day, then I’m not going to go down with a frown. I’m going down with a smile on my face, knowing that I’ve gotten everything out of life.”

This story has been changed to correct the name of the Kelly’s doctor to Dhiren Shah.

Earnhardt Jr. thrilled to be cleared for NASCAR return